Donald Trump laid out his “America First Energy Plan” yesterday at the annual Williston Basin Petroleum Conference in Bismarck, North Dakota. As with his America First foreign policy address last month, Trump made big promises and got a lot of facts wrong.

Trump’s energy plan is easy to summarize: less regulation, more oil, gas, and coal. Besides putting Washington bureaucrats in their place, he will “cancel the Paris Climate Agreement,” “save the coal industry,” make the United States “totally independent of any need to import energy from the OPEC cartel or any nations hostile to our interests,” and of course, “Make America Great Again.”

Lots will be written in the coming days pointing out all the errors, inconsistencies, and distortions in what Trump said. Indeed, some pieces have already appeared. Critics certainly have a lot to go after. The U.S. oil rig count has plunged, and oil workers have been laid off, not because of regulations drafted in Washington, but because oil prices have plunged. Increased fracking means more natural gas and lower natural gas prices, which will make coal less competitive and intensify the industry’s decline. The United States doesn’t have 1.5 times as much oil as the combined proven reserves of all OPEC countries”; Saudi Arabia’s reserves alone are more than seven times larger than U.S. reserves. The United States also doesn’t possess “more natural gas than Russia, Iran, Qatar, and Saudi Arabia combined”; Qatar by itself has more than twice the proven reserves of the United States. The administration doesn’t have the ability to “bypass Congress and impose job-killing cap-and-trade” rules. President Obama didn’t need Congress’s permission to sign the Paris Climate Agreement, which by the way does not give “foreign bureaucrats control over how much energy we use right here in America.” The list goes on.

The big question, though, is whether highlighting these errors will improve the public debate. That doesn’t seem to have been the case so far in 2016. For those of us in the think-tank world, that is a sobering reality.

Trump and Hillary Clinton continued to spar over foreign policy. Trump tweeted that, “Crooked Hillary Clintons [sic] foreign interventions unleashed ISIS in Syria, Iraq and Libya.” He also told the crowd at a rally in California that “if she wins, get used to nothing but turmoil.” Clinton characterized Trump’s anti-terror policies as “potentially dangerous” and outlined her own strategy for combatting global terrorism. Clinton also attacked Trump’s economic and immigration policies and his previously released tax returns. Bernie Sanders criticized Clinton for declining to debate him in California while his campaign continued to argue that he will do better against Trump. Sanders also visited the U.S.-Mexico border to call for immigration reform.

President Obama told reporters in Japan that his fellow heads of state are “rattled by Trump.” (Trump countered: “When you rattle someone, that’s good.”) The president also reassured a group of young leaders in Vietnam that, despite what they might see as the chaos of Campaign 2016, “things are going to be ok.” Juliet Eilperin pondered why Obama decided to discuss domestic politics while overseas.

Kirk Semple wrote that Mexico is preparing to counter any changes to U.S. foreign policy a Trump presidency might bring. Frida Ghitis looked at which countries are hoping for a Trump presidency. Walid Phares, a Trump foreign policy advisor, said  that Trump has not yet developed a Ukraine policy. Gideon Rachman called Trump’s foreign policy ideas “a headlong American retreat from ‘greatness’ on the world stage.” Kiron Skinner argued that “maybe, though, there is more intentionality to [Trump’s] foreign policy than pundits and critics realize.”

Molly O’Toole looked at how Sanders supporters on the Democratic platform committee might trigger a fight over U.S. policy toward Israel. She also speculated on who might take foreign policy jobs in a Trump administration. David Rothkopf argued that Clinton’s experience with failure “strengthens her POTUS potential.” That brings to mind a maxim I once heard: good judgment comes from experience, which comes from bad judgment.

There are two Democratic nominating events next week. On June 4, Democrats in the Virgin Islands hold their caucus. Twelve delegates are up for grabs. On June 5, Democrats in Puerto Rico do likewise, with sixty-seven delegates at stake. The Republicans have next week off. 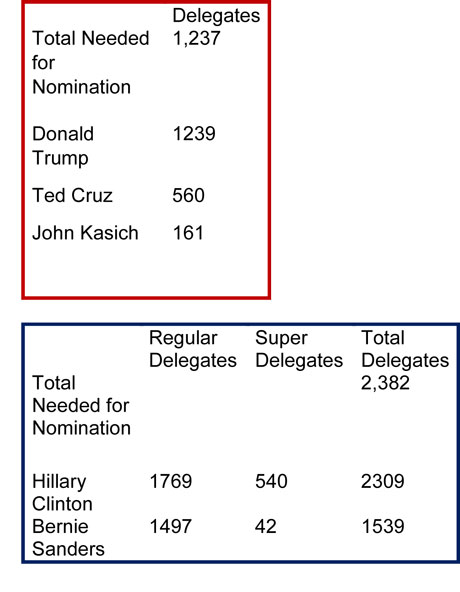 Election Day is 165 days away.