Trade has surged to the forefront of the campaign debate in recent weeks as nominating events have moved to the industrial Midwest. Both Donald Trump and Bernie Sanders have been hammering the inadequacies of America’s existing trade agreements, arguing that they enrich corporations at the expense of American workers. Books can and have been written on the effects of trade, so I won’t reprise all those arguments and counter-arguments here. But given that presidential campaigns often generate more heat than light, three things are worth keeping in mind about trade:

How then does the United States preserve the gains from trade while mitigating the downsides? Trump’s and Sanders’s proposed solution, revoking existing trade agreements, would do far more harm than good—to ourselves and to others. Noah Smith has rightly likened it to “finding out that reading in low light can be bad for your eyes, and reacting by giving up books.”

That leaves an opening for Ted Cruz, John Kasich, and Hillary Clinton, all of whom are more supportive of free trade. What mix of specific policies would they pursue to make trade work for all American workers?

Here’s hoping that sometime between now and November we get some detailed answers to that question.

Trump responded to a question about who he talks to on foreign policy by saying “I’m speaking with myself, number one, because I have a very good brain and I’ve said a lot of things." Hillary Clinton took direct aim at Trump in her victory speech on Tuesday night, saying that he was not strong but wrong. Kasich called on North Korea to release Otto Warmbier, the University of Virginia student and Cincinnati native recently sentenced to fifteen years at hard labor for attempting to steal a political propaganda poster in his Pyongyang hotel room. Ted Cruz came under attack for unveiling a national security advisory team that includes experts with extreme anti-Islam views.

The Economist Intelligence Unit, a risk analysis firm, warned that a Trump presidency could slow down global growth. The Wall Street Journal reports that “GOP primary voters are conflicted on immigration, raising questions for Trump’s stance.” Former CIA and NSA Director General Michael Hayden said he did not think Trump was kidding when he said that the person he consults on foreign policy is himself. The Washington Post reports that foreign ambassadors are anxious about what a Trump presidency means for U.S. foreign policy. 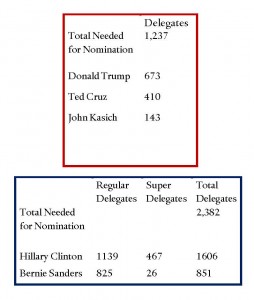 Election Day is 235 days away.