Polls done in the wake of Sunday’s horrifying mass shooting in Orlando confirm two truths about public opinion: what Americans worry about shifts with events, and Democrats and Republicans view the world differently.

An online NBC News/Survey Monkey poll done on Monday found that 24 percent of American think that terrorism is the issue that matters the most. That’s double the 12 percent who ranked terrorism as the most important issue a week earlier. 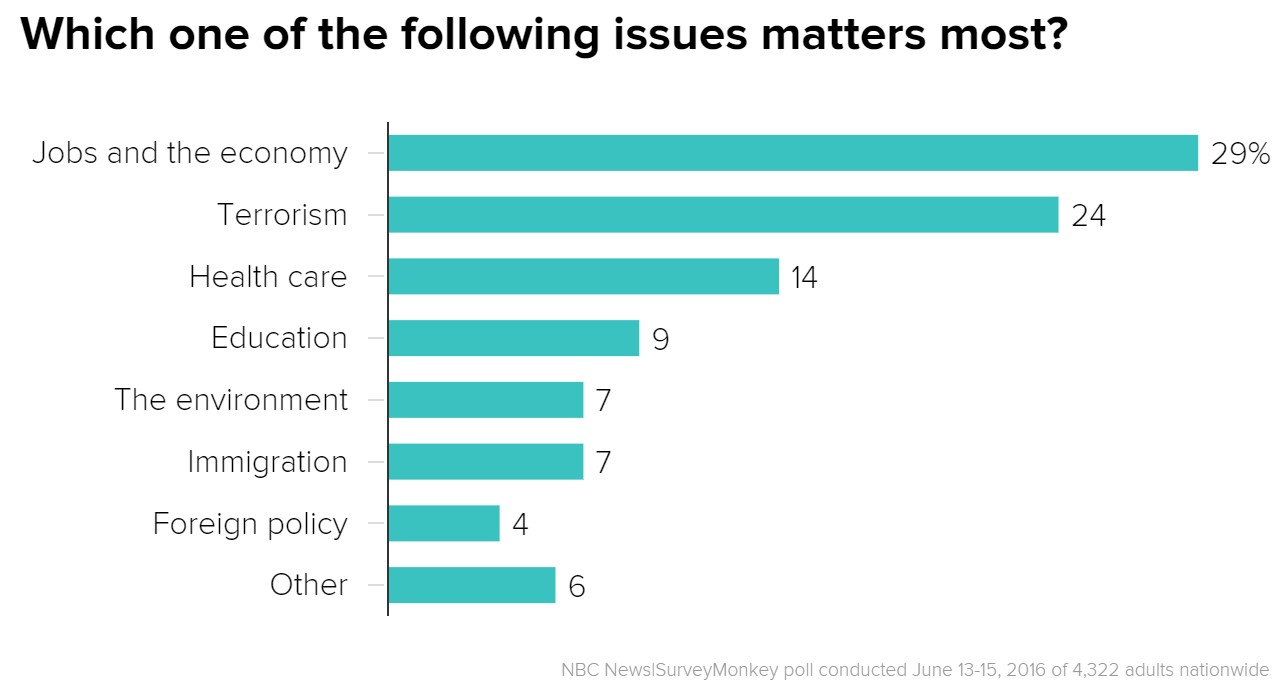 But the level of concern about terrorism continues to vary along party lines. Republicans are nearly twice as likely as Democrats to say that terrorism is the issue that matters the most. Independents, meanwhile, look more like Democrats when it comes to where terrorism falls on their list of concerns. 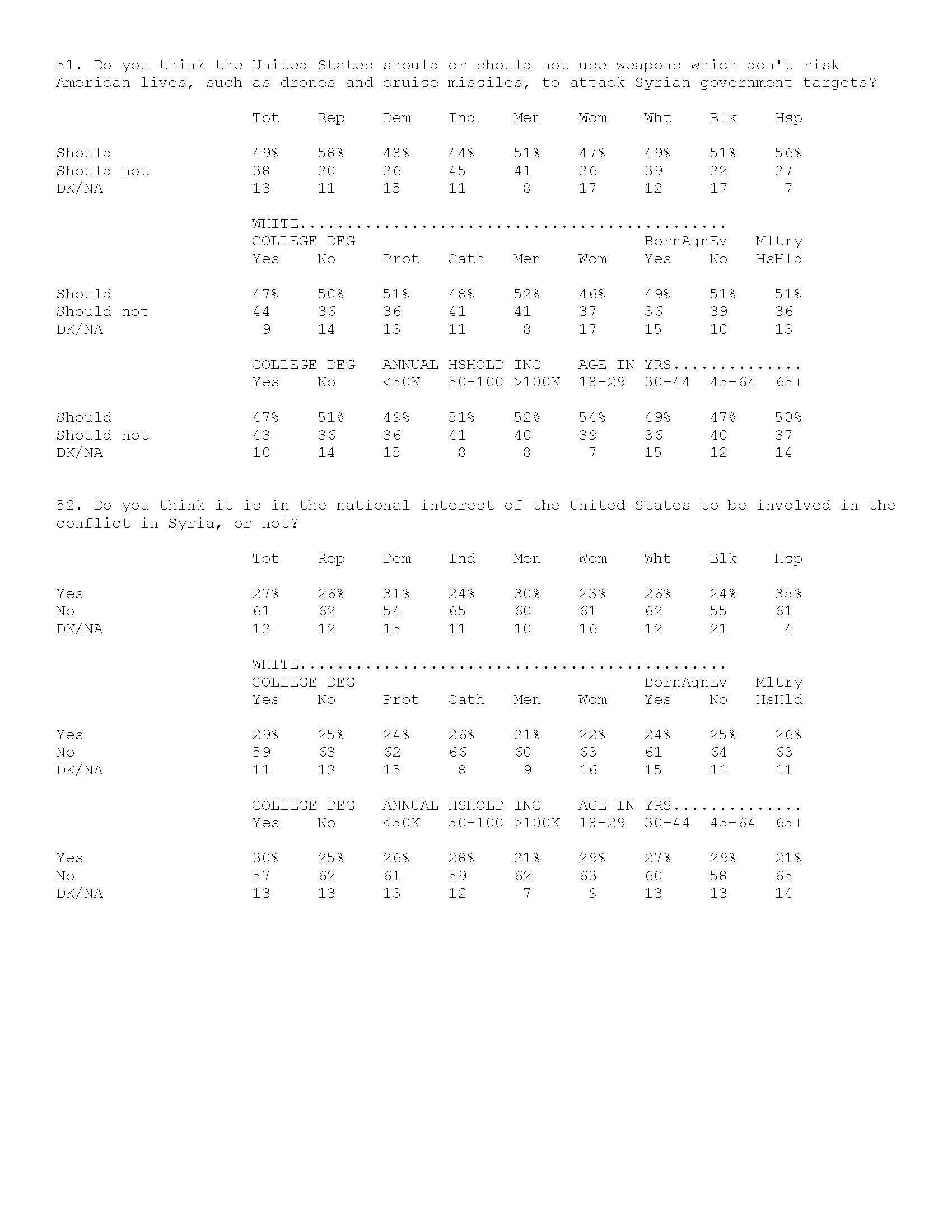 One reason for the partisan difference is that Democrats and Republicans don’t view the Orlando mass shooting in the same way. In a poll released today, Gallup asked whether the shooting was more of an act of domestic gun violence or an act of Islamic terrorism. Sixty percent of Democrats said gun violence, while 79 percent of Republicans said act of Islamic terrorism.

CBS News poll framed the question slightly differently, asking whether the shooting was “mostly terrorism” or “mostly a hate crime.” CBS News also gave respondents the option of picking “both.” Majorities of Democrats, Republicans, and Independents all opted for “both.” But among those who opted for the other two choices, a partisan split was clear. While 22 percent of Republicans said that the shootings were “mostly terrorism,” just 8 percent of Democrats agreed. Conversely, while 37 percent of Democrats said that the shootings were “mostly a hate crime,” only 10 percent of Republicans agreed. Independents fell roughly halfway in between.

In all, these poll results suggest that the Orlando shootings have reinforced pre-existing partisan views rather than to have changed many minds.

Clinton and Trump both used speeches on Monday to explain their national security and counterterrorism plans. Clinton said that “if the FBI is watching you for a suspected terrorist link, you shouldn’t be able to buy a gun.” Trump promised that if elected, he “will suspend immigration from areas of the world where there is a proven history of terrorism against the United States.” Trump also said that if Kim Jong-Un came to the United States, he’d “accept him” but “wouldn’t have a state dinner” for him. Trump tweeted an article claiming that the Obama administration actively supported al-Qaeda in Iraq, the predecessor to the self-proclaimed Islamic State.

The Clinton campaign released its first general election ad, “Who We Are.” Clinton narrates the ad, which juxtaposes clips of Trump’s most controversial comments with her own calls for renewed national unity and bipartisanship.

President Obama denounced Trump without mentioning him by name for “singl[ing] out immigrants and suggest[ing] entire religious communities are complicit in violence.” Speaker Paul Ryan rejected Trump’s call for a ban on Muslim immigration, saying that the Muslim community is “among our best allies” in the “fight against radical Islamic terrorism.” Sen. Lindsey Graham (R-SC) criticized both Clinton and Trump, claiming that neither is equipped to “win a war [on terrorism] that we can’t afford to lose.” Richard Armitage, who was deputy secretary of state during George W. Bush’s first term, said that he will vote for Clinton because Trump “does not appear to be a Republican, he doesn’t appear to want to learn about issues.”

Russian hackers stole the Democratic National Committee’s opposition research on Trump. Gabriel Debenedetti broke down the ways in which the Clinton campaign must defend itself against a security-minded Trump campaign. Ben White examined whether a “Brexit” would harm the Clinton campaign. Molly O’Toole assessed how the challenge from Sen. Bernie Sanders led Clinton to alter her foreign policy platform.

Clinton’s victory in Tuesday’s Democratic primary in Washington, DC, brought the 2016 nominating season to an official close. Now come the conventions. The Republicans convene in thirty-one days at the Quicken Loans Arena in Cleveland on July 18. The Democrats follow seven days later at the Wells Fargo Center in Philadelphia on July 25.

Here is one last look at the delegate count (The Democratic count includes super delegates, elected Democratic officials and members of the Democratic National Committee who can vote for the nominee but who aren’t selected by voters or bound by what they want.): 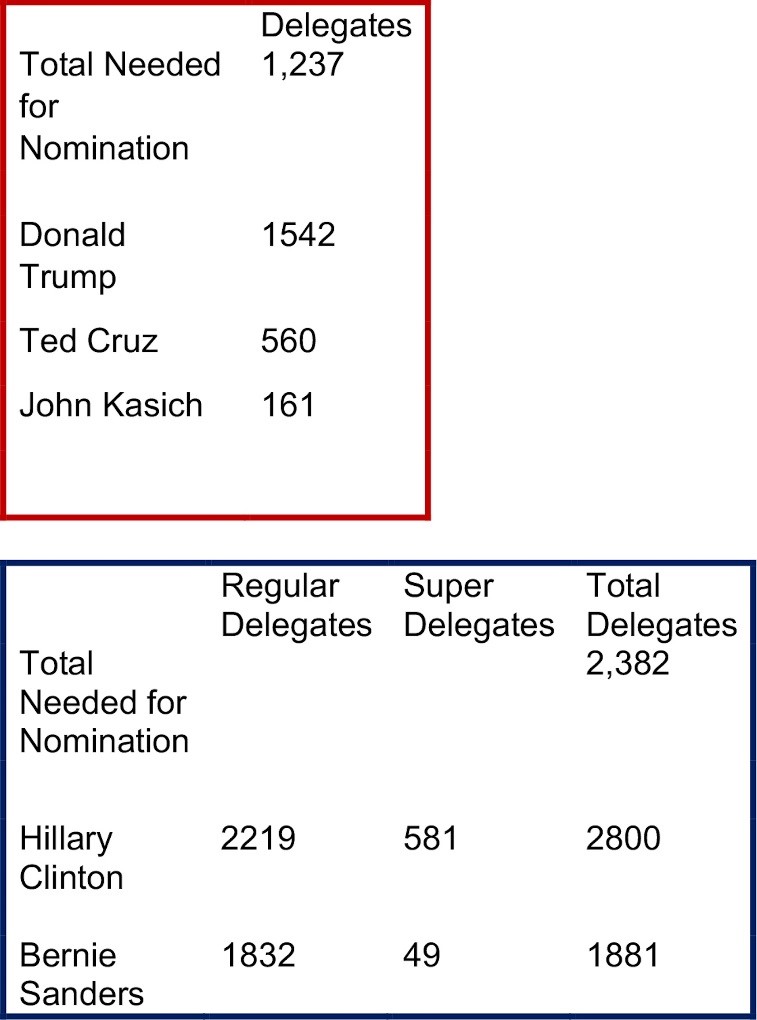 Election Day is 144 days away.

Dara Jackson-Garrett, Jonathan Hyman, and Aliya Medetbekova assisted in the preparation of this post.

What’s Worth Reading This Summer?