Central bank reserve growth has unquestionably slowed. Indeed, global reserve growth in October was almost certainly negative. But the Fed’s custodial holdings are still rising. That could imply that central banks are moving out of euros and into dollars, reinforcing the dollar’s rise. More likely though it is evidence that central banks are moving out of money market funds and other dollar assets with a bit of credit risk. No central bank wants to be in the same position as the China Investment Corporation. Explaining how you lost money on your safe investments isn’t fun.

The general flight out of risk by central banks is one reason why the Treasury’s bailout of the Agencies has failed to halt the central bank run on Agencies. The flight out of Agencies -- and flight into Treasuries -- over the past two months has been stunning. Last week continued the trend: central banks added close to $20b to their Treasury portfolio at the New York Fed while cutting their Agency holdings by $7 billion. That helps support the Treasury market amid all the new supply, but hasn’t done wonders for the Agency market.

Just look at a graph -- produced by my colleague Paul Swartz of the Center for Geoeconomic Studies -- showing the 52 week change in Agency and Treasury holdings. 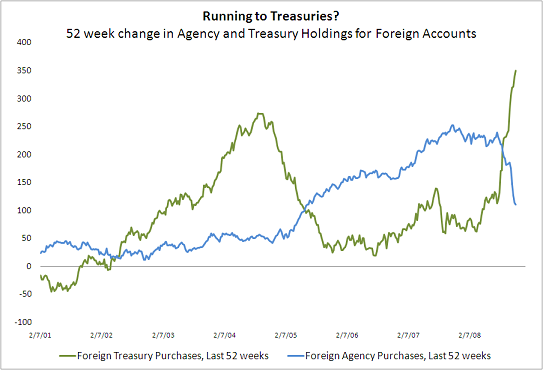 The world -- at least for central bank reserve managers -- changed in late July. The rise in their Treasury holdings since then has been nothing short of stunning. Their activities are having an impact on the Agency market too. Agency spreads have stayed wide -- despite large purchases of Agencies (at least for while) from PIMCO. Paul Swartz helped me show this graphically but comparing the 3m change in central bank holdings of Agencies at the New York Fed to Agency spreads over Treasuries. 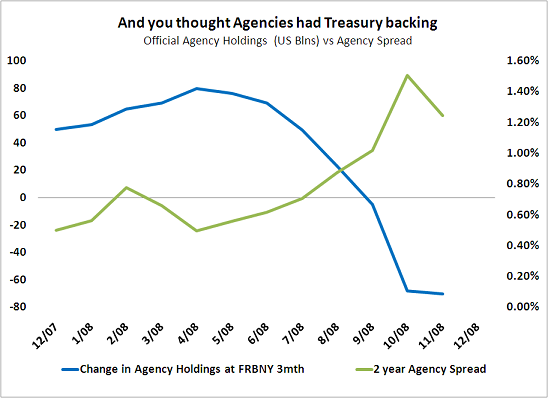 The changes in the Fed’s own balance sheet this week were driven by the growth in its new commercial paper facility -- and rising bank deposits at the Fed. Right now the Fed has raised over a trillion dollars from the new supplementary financing facility and the rise bank deposits at the Fed. Those new funding sources -- rather than the sale of the Fed’s holdings of Treasuries -- have financed its huge lending to the US financial system and its large swap lines with the world’s central banks. 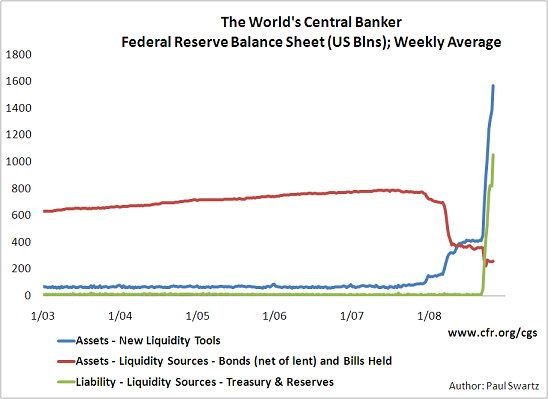 Former (and perhaps future) Treasury Secretary Summers has argued that "You can usually date the end of the crisis to the first moment when a public official makes a forecast that proves too pessimistic." I don’t think we are there yet. The IMF’s latest forecast still strikes me as rather optimistic. I increasingly suspect that one indicator that the financial crisis has truly turned a corner will come when the Fed’s balance sheet starts to shrink ...

How severe a slump in China?