Though perhaps not long-term Treasuries.

There has been a lot of talk about the dollar. And about the shift in China’s rhetoric; China no longer seems all that happy to continue to add to its already considerable dollar reserves. But, well, there isn’t much -- I would even say not any -- evidence that central banks have really lost their appetite for dollar reserves. The rise in foreign central banks’ custodial holdings at the Fed over the last 13 weeks has been rather impressive.

It is back at peak or near peak levels. 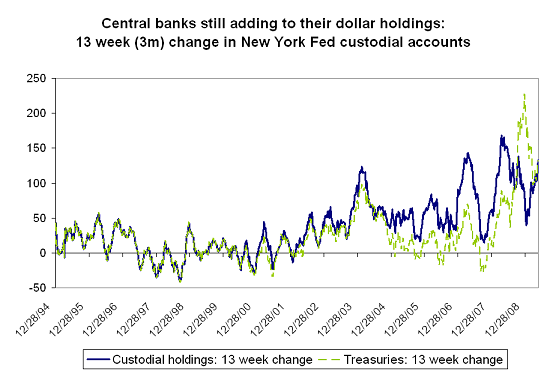 In the first three weeks of May central banks added over $60 billion to their holdings at the Fed. That is way more than the US needs to finance a $30 billion or so monthly trade deficit.

The rise in custodial holdings of Treasuries might reflect an ongoing shift out of bank deposits and money market funds. But that doesn’t quite feel right anymore. A host of central banks -- Korea, Russia and possibly Brazil, just to name the most obvious suspects -- are once again intervening in the market to limit their currencies rise.

The rise in Treasury holdings clearly no longer reflects a shift out of Agencies. Custodial holdings of Agencies have been flat recently. 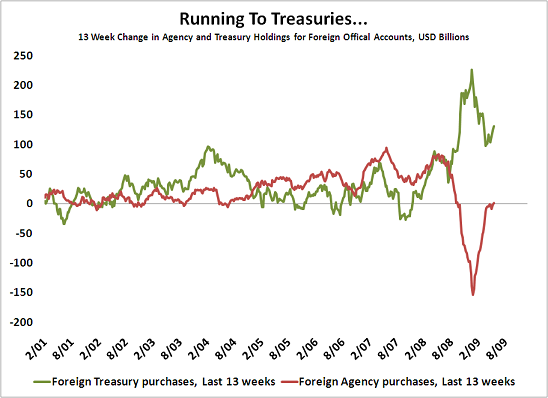 If I had to guess, I would bet that cental bank reserve growth has resumed. A dollar sell-off against the big "floating" currencies generally has been correlated with more intervention among those emerging market central banks that manage their currencies against the dollar.

Clearly, though, something has changed.

And I suspect the main change is that almost all the dollars that central banks are buying are getting channeled into shorter-term Treasury bills, not longer-term notes. That is quite different than in the past. In 2003 and 2004 -- and again in 2007 and early 2008 -- a spike in central bank intervention would lead to a rise in central bank demand for longer-term bonds.

As the yields on longer-term Treasuries rise, though, the opportunity cost -- or at least the foregone interest income -- of staying in bills rises ... at some point, I would guess that some reserve managers will need a bit of income, and become convinced that yields on longer-dated Treasuries have risen by as much as they are going to rise.

The heavyweights chime in …