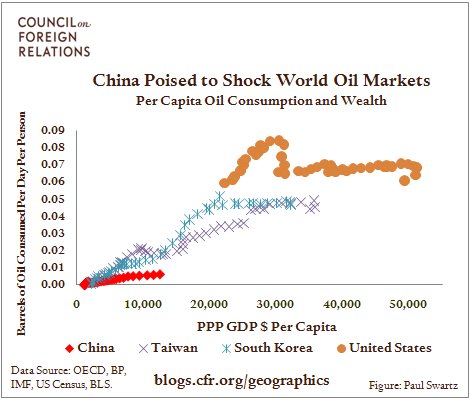 As a country’s per capita income increases, its per capita oil consumption increases. Consumption growth tends to be modest up until $15,000 income per head, but then accelerates rapidly. China is quickly approaching this point. South Korea, which consumes 3% of world oil output, is too small to disrupt oil markets.  China is too big not to disrupt them.  Were China’s per capita oil consumption to be brought up to South Korea’s, its share of global consumption would increase from today’s 10% to over 70%.  In order to cap China’s share at 22%, which is the U.S. share today, global oil output would have to increase by a massive 13% per annum over ten years – well beyond the 1% growth averaged since 1975.  This rate of growth is inconceivable, even if vastly more expensive sources of supply, such as the Canadian oil sands, were developed at breakneck speed.  If China’s recent economic growth pace continues, it will surpass South Korea’s current per capita GDP shortly after 2020 - meaning that the world may be forced onto alternative energy sources much sooner than it realizes.