And the IMF projects that China’s tourism boom will continue. The IMF’s long-term current account forecast assumes that continued explosive growth in tourism will pull China’s current account surplus back to around 1 percent of GDP even as China’s goods surplus remains elevated. A roughly $200 billion services deficit in 2015 will become a $500 billion deficit in 2020 (3 percent of $16 trillion is a big number; see table 2 on p. 40).

There is only one problem with China’s current tourism boom: It isn’t confirmed in the data reported by China’s counterparties in the tourism trade.

No one should doubt that Chinese tourism to Japan has increased enormously. It shows up in the Japanese arrivals data. It fits with a broader policy decision to liberalize visas. And it fits with economic theory too; the weaker yen has made Japan affordable to a broader group of Chinese residents.

But spending by Chinese tourists in Japan is also too small relative to the total to drive the data.

Both Japan and the United States break out "exports" of tourism services to China (in the U.S. data, exports of travel services are combined with exports of education services—so the data captures tuition payments as well as spending in the United States by Chinese tourists). There is ongoing growth, but the rise—in billions of dollars—in the Japanese and U.S. data clearly is not equal to the explosive growth in the Chinese data (and in q2 2016, there are some indications that the average spending by Chinese tourists in Japan is falling). 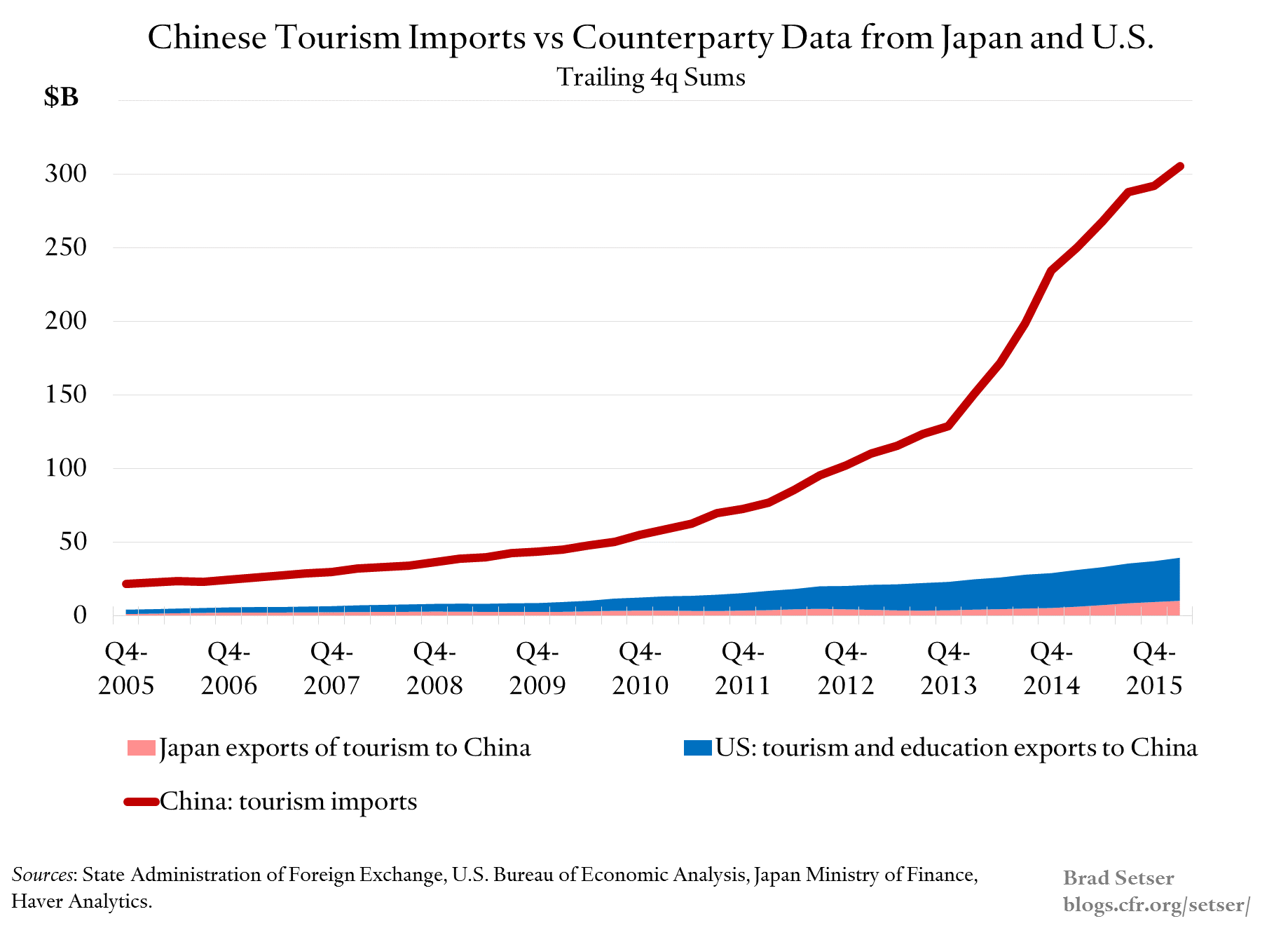 The same is also true if you look at reported tourism exports by Hong Kong, Korea, Taiwan, and Thailand (a popular destination for Chinese tourists). I could only find data on total tourism "exports," not exports to China. But the same pattern holds. There is ongoing growth, but not the explosive growth that China reports. 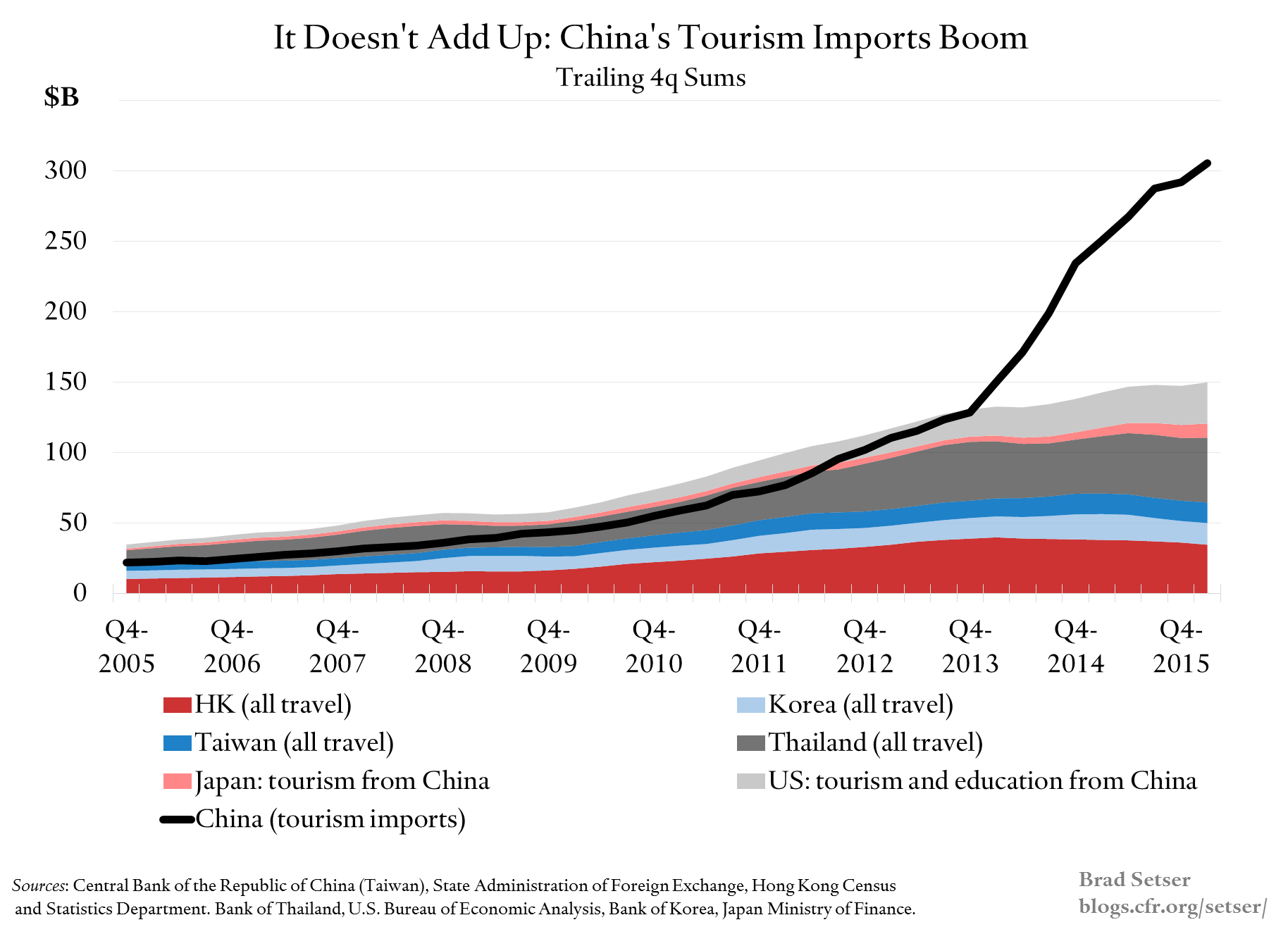 Puzzling, eh? Especially when the growth in actual Chinese tourists travelling abroad is more in line with the numbers in the counterparty data. In q1 2016 the number of Chinese tourists who traveled abroad was about 2.5 percent higher than the number in q1 2015 (with a large fall in trips to Hong Kong offsetting growth elsewhere), and for the first half of 2016, the number seems up by around 3 percent. And the data on global travel doesn’t show Chinese-sized numbers for Asia either.

The team here at the Council on Foreign Relations has a bit of Econbrowser envy, so—led by Cole Frank, a research associate here—we even did a few regressions, and worked to raise our chart-game.

Until fairly recently, the data on U.S. spending on tourism more or less predicted China’s tourism imports. Not anymore. 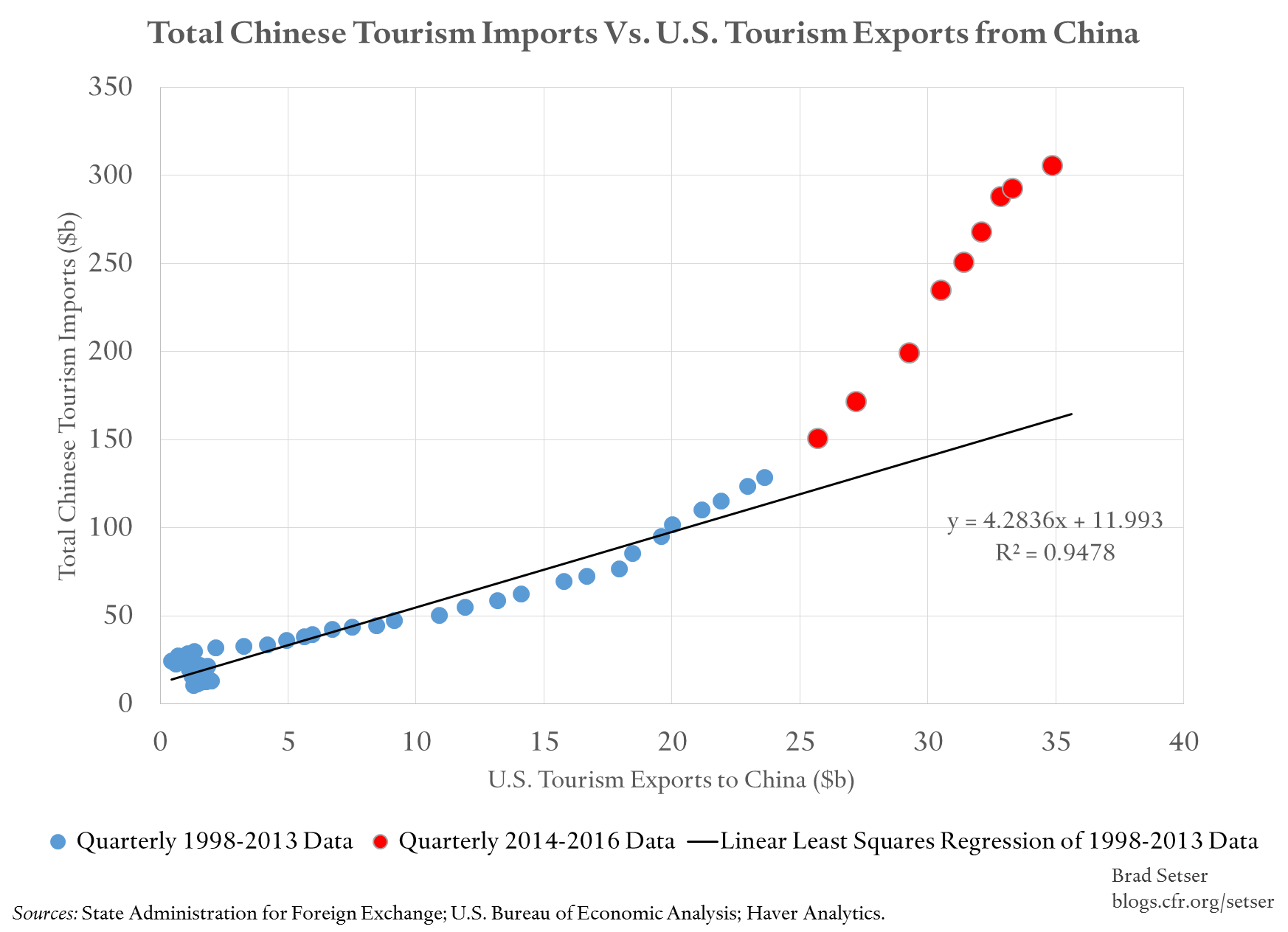 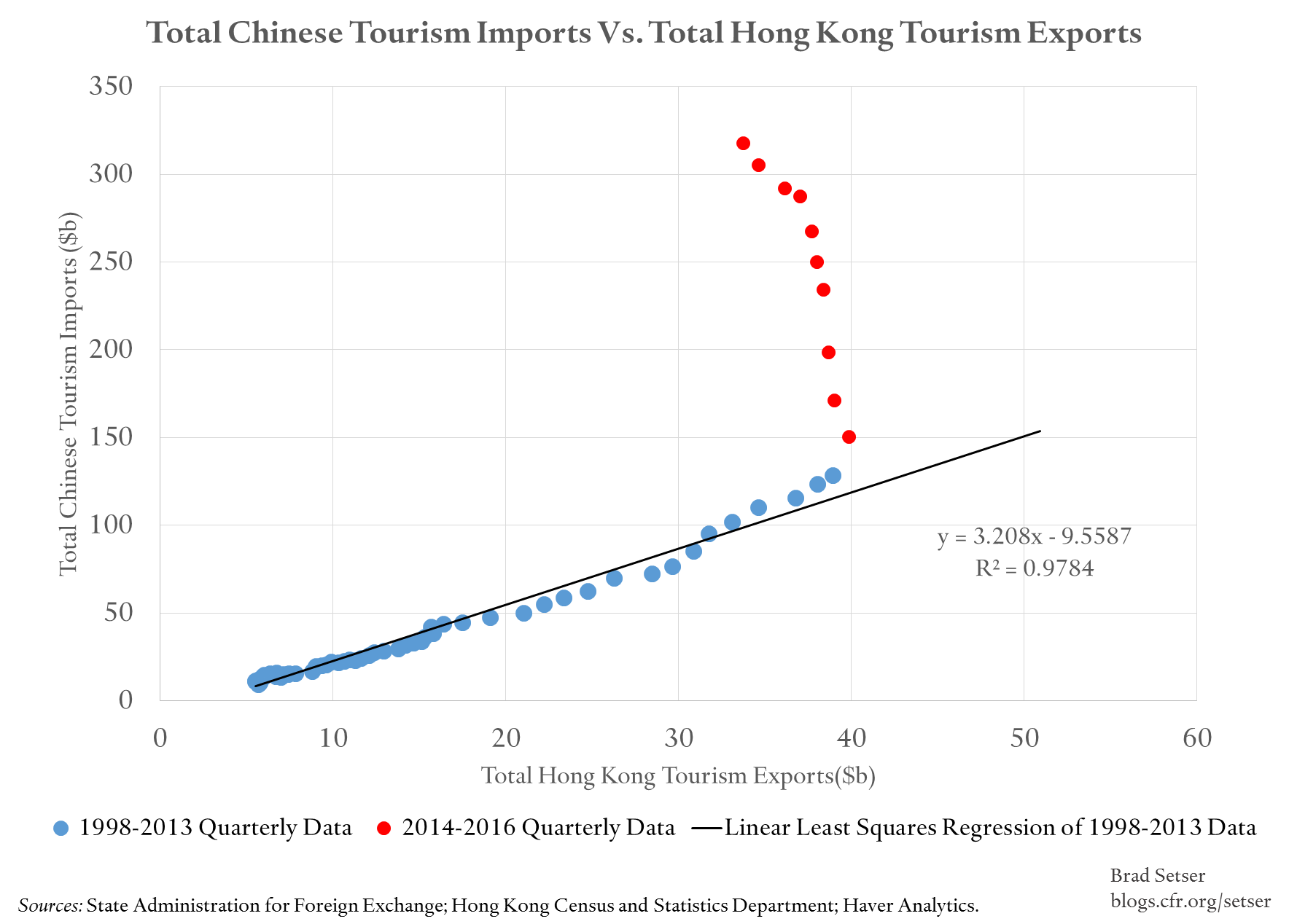 Something clearly has happened with the Chinese data.

Theory 1: Hidden imports. Chinese tourists travelling abroad are spending a lot on luxury (and non-luxury) goods, and bringing them back to China. It isn’t difficult to figure out why. China taxes a lot of goods heavily at the border (tariffs), it imposes a significant VAT (and no doubt that is always collected on imports), and for many items, there is also a luxury tax. The data on tourism exports that counter-party countries report should only captures the money Chinese tourist spend on say hotels and restaurants when they travel, not what they spend on actual goods when they are abroad.

The problem with this theory? To put it simply, Hong Kong. Chinese tourists have long spent big sums in Hong Kong. Fun fact: one of the biggest U.S. exports to Hong Kong has long been "non-monetary" gold and I would be willing to bet that U.S. gold sold to Hong Kong (and other luxury goods, like jewelry) doesn’t stay in Hong Kong. To prove that total spending on travel and goods that are bought abroad to avoid domestic tax is growing as fast as the "new" Chinese data on tourism indicates, you need to show that the clear rise in spending in say Japan isn’t balanced by falling sales of luxury items in Hong Kong. Tourism gurus are reporting a big fall in Chinese spending per tourist in Hong Kong over the last two years. With visits down and spending per tourist down, Hong Kong is pulling down the global total in a big way.

The problem with this theory? The same: the sums involved are so big that there should presumably be a few more traces. Though a hundred billion in hidden capital outflows is a lot easier to hide than $100 billion in hidden spending on the rest of the world’s goods.

The puzzling aspects of China’s tourism boom are a topic that I wish the IMF had examined a bit more closely at this in its annual report on China. Especially as the Fund is implicitly forecasting that Chinese tourism spending will go from $300 billion or so to $700 billion or so by 2020 (that is roughly what is needed to generate the $450-500 billion services deficit the Fund forecasts for China in 2020).

It isn’t hard to see why the tourism deficit might not be quite what it seems. The rise has been remarkably fast, it isn’t reflected in the data on actual people moving across borders and the bigger numbers coincide with heavy data revisions.

And, well, the tourism deficit is big enough that it now matters globally. To put China’s tourism imports in context, the reported imports of tourism (e.g. spending by Chinese tourists abroad) is now within shouting distance of the eurozone’s current account surplus. Chinese tourist spending abroad is still smaller, but only just: China reported around $320 billion in tourism imports in the last four quarters of data, and the euro area current account surplus in the last four quarters of data is around $390 billion.