The release of China’s July trade data was overshadowed by far more dramatic developments in the markets.   What is a $24.4b surplus accumulated over a month compared to the decision of the world’s central banks to inject over $200b into the world’s banking system over two days?

But China’s July surplus is still remarkable.  Some had expected that the end of certain export rebates would have pulled some July exports forward, increasing the June surplus and cutting the July surplus.  But that didn’t seem to happen.  Others expected that concerns about the safety of Chinese products would cut into China’s export growth.   That too didn’t happen.

Year over year export growth actually accelerated in July.  Import growth was up too, in part because of rising energy prices (oil imports increased 39% y/y – see Richard McGregor in the FT).  Watch China’s surplus really soar if oil should ever fall back to $40 a barrel, let alone $25. 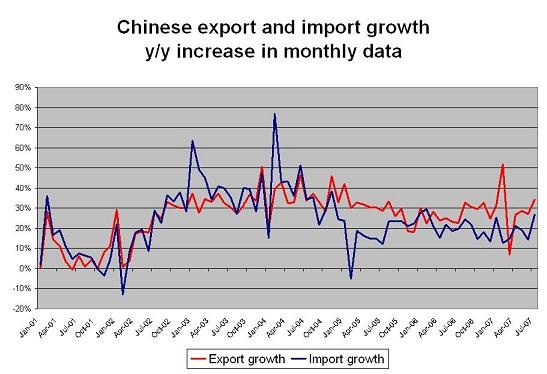 The monthly data jumps around a bit (especially because the usual February fall in China’s exports came in March this year) -- but the broad trend is that Chinese export growth seemed to be slowly slowing from late 04 to mid 06, but the pace of export growth jumped up again in late 06 and has stayed strong in 07.  A chart that compares the y/y change in a rolling three month sum shows the same basic pattern (it too is distorted by the unusual February/ March pattern). 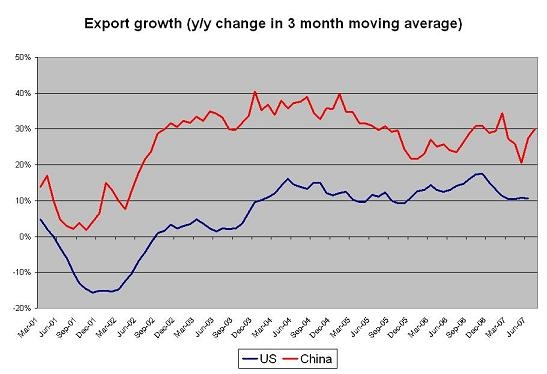 I find it interesting that Chinese export growth and US export growth seem to move together.   That to me, suggests that they responding in similar way to similar forces – global growth, and moves in the $/ euro and RMB/ euro.   Remember –as He Fan right notes – that so long as China ties its currency to the dollar, dollar weakness becomes RMB weakness and dollar strength becomes RMB strength.

However, Chinese exports have clearly responded much more strongly to dollar and RMB weakness than US exports.   If China sustains the y/y export and import growth rates of the last three months, its 2007 trade (customs basis) surplus would reach $300b.  Even if exports slow a bit, I don’t quite see how China’s surplus will be much below $275b.

Beyond that, I don’t have much to add to what Michael Pettis already wrote.

Pettis teaches finance at Peking University – he knows China.   He also knows a lot of about emerging economies.  He was a New York investment banker specializing in emerging market debt for a long-time.  His book on emerging market debt -- The Volatility Machine -- is one of my personal favorites.

And he recently started a blog: China Financial Markets.

I probably won’t always agree with Mr. Pettis.  I, for example, worry a bit more about the long-term cost of the large US trade deficit than Mr. Pettis does, and thus weight the costs and benefits (to the US) of Chinese financing of the US a bit differently than he does.  But I have a tremendous amount of respect for his analysis.

Pettis argues that China can only stop the expansion of its trade surplus if it (re)gains monetary control, and that requires a revaluation big enough to end expectations of further RMB appreciation and to suck in enough imports to slow the growth of China’s surplus.

I continue to believe that China is caught in a trap in which trade surpluses are both the cause and consequence of monetary expansion.  Until something is done directly to change the terms of the trap, I believe China's trade surpluses will continue to stay high, and will probably rise in the next few months as Christmas deliveries kick in.

In Pettis’ view – at least as I understand it -- a trade surplus today leads to more money growth, more bank lending, more investment, more capacity, and thus a bigger trade surplus tomorrow.   Something needs to break that chain or the trade surplus will continue to grow.  There may be something to his argument – so far, at least, strong money growth in China hasn’t led to (much) inflation or let to a real appreciation that slows China’s export growth.   That is the big puzzle about China.

“China can engineer a sudden and unexpected maxi-revaluation of at least 10-15% (as I explain in the June issue of Far Eastern Economic Review).  This would not have as big an impact on exports as the financial authorities fear, but it might boost imports and would almost certainly reverse or at least slow down hot money inflows.”

And apparently I am not the only one in New York who thinks 10-15% wouldn't be enough.

Update: While inflation in China has been far lower than in some other countries that peg to the dollar -- the UAE and Qatar, for example -- Chinese inflation is now rising, led by a strong rise in food prices.   I would still argue that inflation hasn't generated a significant real appreciation, but if the current acceleration in inflation continues, it could.