There is a very widespread sense that the US “needs” China more now because it is issuing more Treasuries to finance its fiscal deficit.

The US government is borrowing more, from almost everyone. But other sectors of the economy are borrowing a lot less.

Of course, China bilateral surplus with the US remains, as does its global surplus -- so China is a bit of an exception to that general story. China’s surplus is likely the main counterpart globally to the United States remaining external deficit.

Now a fiscal deficit that leads to a surge in demand that pushes up both the US trade deficit and China’s surplus could push up Chinese demand for Treasuries. So there is a potential conceptual link between the number of Treasuries issued to finance the fiscal deficit and China’s purchases of Treasuries. Over the last few months, though, the trade deficit has fallen sharply even as Treasury issuance as soared. The bigger fiscal deficit leads to more demand for the world’s goods and a bigger external deficit story may prove true over time, but it isn’t an accurate account of the current dynamics.

Getting the scale on the graph right was hard. The huge scale of the Treasury’s current issuance dwarfs what once seemed like large purchases by individual countries. A graph that simply shows the various countries purchases relative to each other might be better.

The following graph – which is a bit simpler – may be easier to see. Over the last 12 months of data, China bought about $250b of Treasuries, and other central banks bought just about as many. But, by our calculations, the outstanding stock of Treasuries not held at the Fed increased by $1.7 trillion. 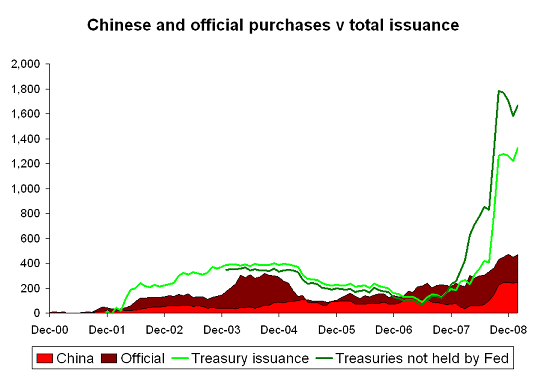 That means the majority of the Treasuries issued over the past 12 months were bought by private investors, at home and abroad.

-- Over the next 12 months, reserve managers are likely to buy fewer Treasuries than they did over the past 12 months. $500b in annual Treasury purchases by the world’s central banks isn’t consistent with shrinking global reserves. The rise in central bank demand for Treasuries in late 2008 was far more tied to the rise in central bank sales of Agencies than anything else. At some point the reallocation out of agencies and other assets that reserve managers now consider too risky will stop. Of course, if a burst of global confidence leads to renewed capital inflows to the emerging world and reserve growth resumes. That could provide an additional source of demand for Treasuries. A fall in hot money outflows from China that pushed Chinese reserve growth back up also might have an impact. But right now Treasury purchases by the world’s reserve managers are running well ahead of the growth in their reserves.

-- Over the next 12 months, the Fed will be a net buyer. It was a net seller for the last 12 months, as it unloaded its Treasury portfolio to finance its lender-of-last resort activities (it also lent its long-term treasuries out to market players needing liquidity). The peak in Fed sales’ coincided with Bear Stearns’ collapse. In fact, the recent data already shows a change. The TIC data ends in February, as does the graph But we know that over the past few months the Fed has increased its Treasury purchases (as well as reduced the number of long-term Treasuries it lends out). The bright green line (issuance of marketable treasuries) will consequently start to exceed the dark green line.

-- For seasonal reasons, Treasury issuance is usually lower in the second quarter than in other quarters. Issuance will pick up in the third quarter. On the other hand, the Treasury bill issuance that was tied to financing the Fed shouldn’t grow at the same pace as in the past, even if the SRF isn’t being phased out in the near-term. And -- unless something changes -- there won’t be another round of Treasury issuance linked to the bank bailout.

Last fall private investors flocked to Treasuries as they sought safety. That though was largely a reallocation out of existing assets. The key thing to watch going forward, in my view, is how much of the rise in US savings flows into the Treasury market. The fall in the trade deficit means the US is borrowing less not more from the world. And thus more of the US fiscal deficit needs to be financed domestically.

Obviously, if a major holder like China started to sell at a time when the US needs to sell record sums of Treasuries that would be a big deal. 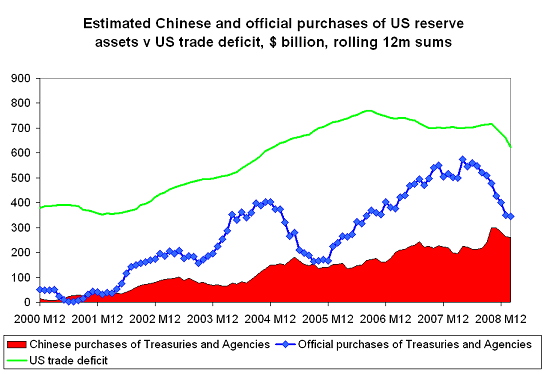 How much "capital flow reversal" insurance should the world offer?