I liked John Authers’ FT column on China, and basically agree with it.

The chart showing the correction in the yuan’s value against a broad trade-weighted index is especially helpful. A lot depends on the particular index you use, but there should be no doubt that a significant part of the yuan’s broad appreciation in late 2014 has now been reversed.

I did take issue with one point. Authers writes that both Chinese exports and imports are on a declining trend.

"Chinese exports dropped noticeably last month (causing a frisson in global markets). Meanwhile, imports ticked up, suggesting at least some life in the Chinese economy. Both imports and exports are on a steadily declining trend, so China’s economy is slowing down." 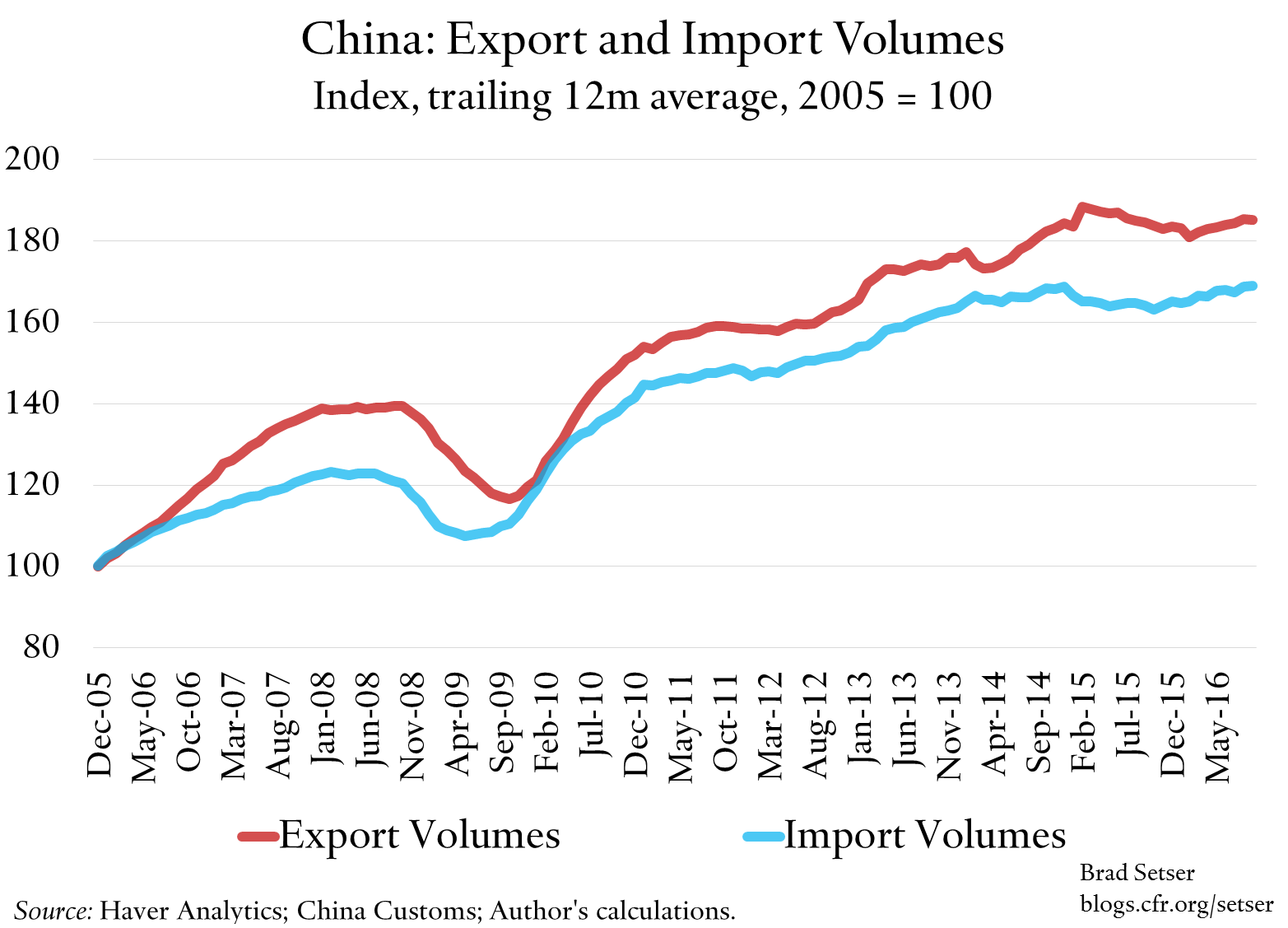 Using China’s own data for the year to August, exports are up a modest 1.8 percent (versus the same period a year ago), and imports are up 3.4 percent. Throw in an estimate for September’s volumes (-1 percent on exports, + 1 percent on imports: this is without any adjustment for working data) and the numbers dip a bit, but still positive year over year (1.5 percent for exports, 3.1 percent for imports).

On the export side, q1 was bad—export volumes were down a couple of points (the 2014 q1 base was a pretty good, which is part of the story. But I think q2 and q3 both show roughly 3 percent y/y growth in export volumes—a strong August is offset by a weak September.

And on the import side, there is no doubt that 3 to 3.5 percent growth in real imports is low relative to an economy that is growing at 6.5 percent.

At the same time, I do think it is important to recognize that 2016 doesn’t look like 2015. in 2015, exports were falling—as were (goods) imports. The combination of the yuan’s broad depreciation and the domestic stimulus have reversed both falls.

If you deflate nominal exports and imports (seasonally adjusted by Haver) by the reported export and import price indexes (and assume prices didn’t change in September), it is possible to construct a very rough graph of export and import volumes since 2005. I emphasize that this is a rough graph, but it is clear even in the trailing 12m sum that there has been a turn.

Do not get me wrong. Both the export and import numbers are on the weak side relative to China’s post-WTO accession history. There is a real puzzle on the import side. Import volume growth (setting tourism aside) has significantly lagged GDP growth over the last 3 years. Directionally both imports and exports now are growing. That is a significant change from 2015.* I do not think September changed the trend (it is mostly payback for a strong August, in part because of differences in the number of working days in the two months relative to 2015) but of course only time and more data will tell.

I harp on this because it is has been particularly important over the last couple of years to look at the "real" numbers, not the dollar numbers. It took a long time before the depth of the early 2015 contraction in Chinese imports was widely recognized. And now I believe that it is important to recognize that the stimulus China adopted last year and early this year did reverse that fall, even if generated other, less attractive side effects.

* In 2015, a simple average of monthly changes in import volumes (which can mislead because of shift in the timing of the new year) showed a 2 percent average fall in import volumes. The change in my index was similar. Some other measures show a small positive number. All numbers show a big gap between reported growth and imports.

Splitting out Emerging Economies Changes the Picture on Global Trade