A few quick reactions to Tony Fratto’s argument that the cost of holding foreign exchange reserves acts as a natural limit on exchange rate manipulation. The cost of holding reserves is the cost of so-called sterilization—issuing short-term domestic currency debt to offset (in technical monetary policy sense) or to fund (in a financial sense) the purchase of a typical reserve portfolio of say 3 to 5 year Treasuries and similar euro-denominated assets.

1) The cost of holding reserves is often the highest in the countries that need reserves the most. They tend to have high domestic interest rates, so the “negative carry” on reserves is significant. Turkey for example. Or Brazil (though Brazil’s central bank has made money on the appreciation of the dollar against the real from 2014 on, with the capital gain on its dollar reserves offsetting some of the negative carry). The high apparent cost of reserves in countries with high nominal rates is one reason some countries—Turkey for example—have found creative ways to limit the fiscal cost of reserves. Turkey allows its banks to borrow from abroad and place the borrowed foreign currency on deposit at the central to meet the banks domestic reserve requirement (the Reserve Option Mechanism).

2) The cost of holding reserves conversely isn’t much of a constraint in “savings glut” countries with low domestic interest rates. Taiwan for example. That is one reason why reserves are a ridiculously high level relative to GDP (about 80 percent of GDP). Or Switzerland. The Swiss National Bank is taking tremendous amounts of foreign exchange risk (so there would be large capital gains or losses from moves in the franc-euro exchange rate, or given the composition of its reserves, in the dollar-euro exchange rate), but its actual interest bill isn’t a constraint. Negative rates on sterilization instruments and positive rates on Treasuries should result in positive carry. The fiscal cost of holding reserves also isn’t a constraint in Japan, though Japan hasn’t been intervening recently. The Ministry of Finance funds its reserves with essentially zero rate notes. The “carry” on reserves is one reason why Japan’s government is actually, according to the IMF, receiving more in interest income than it pays out of interest on its debt.*

3) The cost of holdings reserves did not prove to be a constraint on China either, back in the pre-global crisis days when China really was intervening at a rapid clip to block appreciation of the yuan. China’s reserve to GDP ratio rose from around 15 percent of GDP (2000) to around 50 percent of GDP in 2007 (if you counted all of China’s shadow reserves in 2007 and 2008). 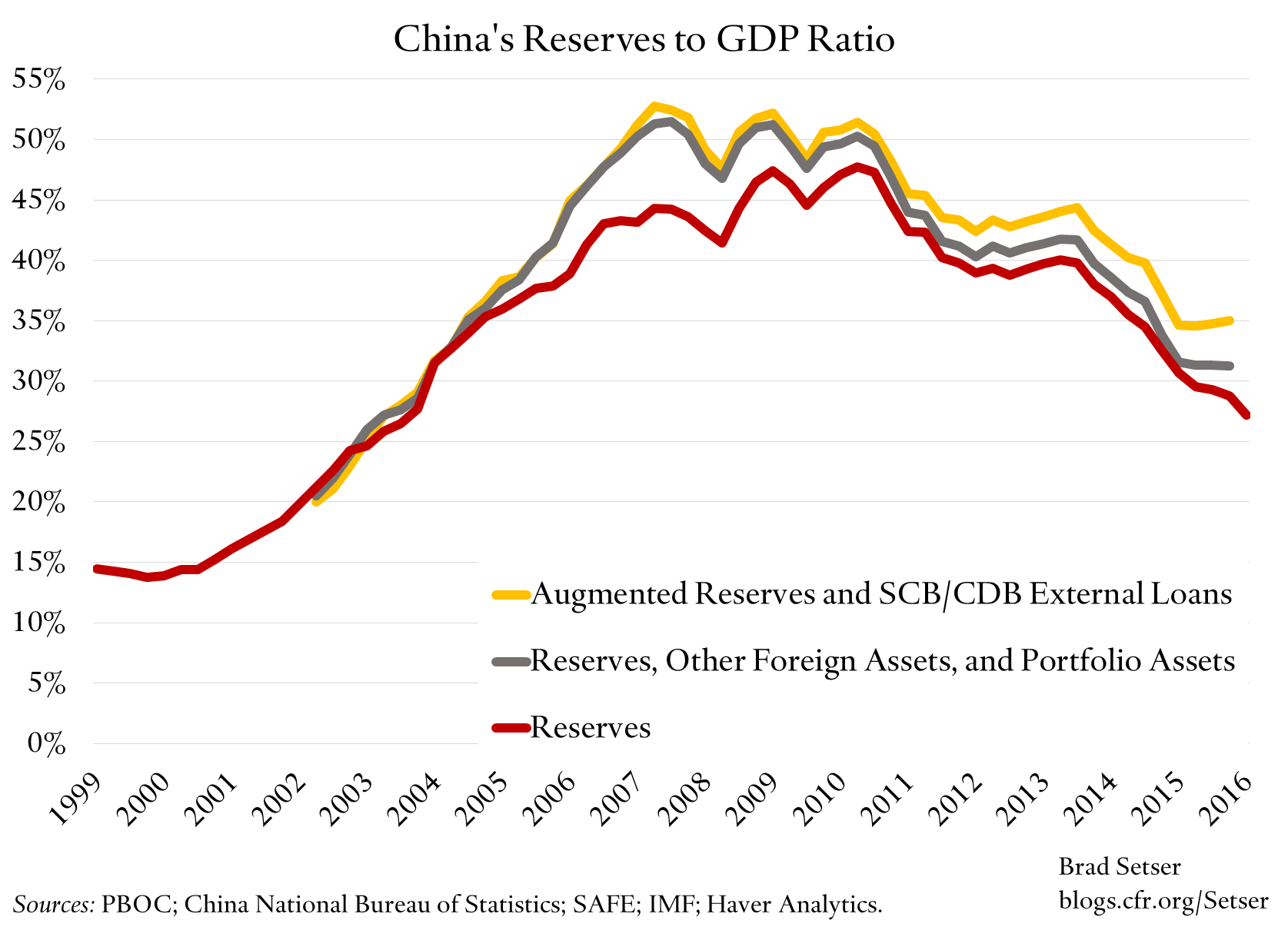 China’s fiscal cost though was limited by China’s relatively large stock of base money. Base money is a zero interest rate loan to the central bank, it is very cheap funding. And it was further limited by China’s ability to shift the costs onto the backing system: China stopped selling expensive sterilization bills, and instead sterilized by raising the required reserve ratio in the banks. And the rate of remuneration on the reserves was kept low. Other countries no doubt have used the same trick. 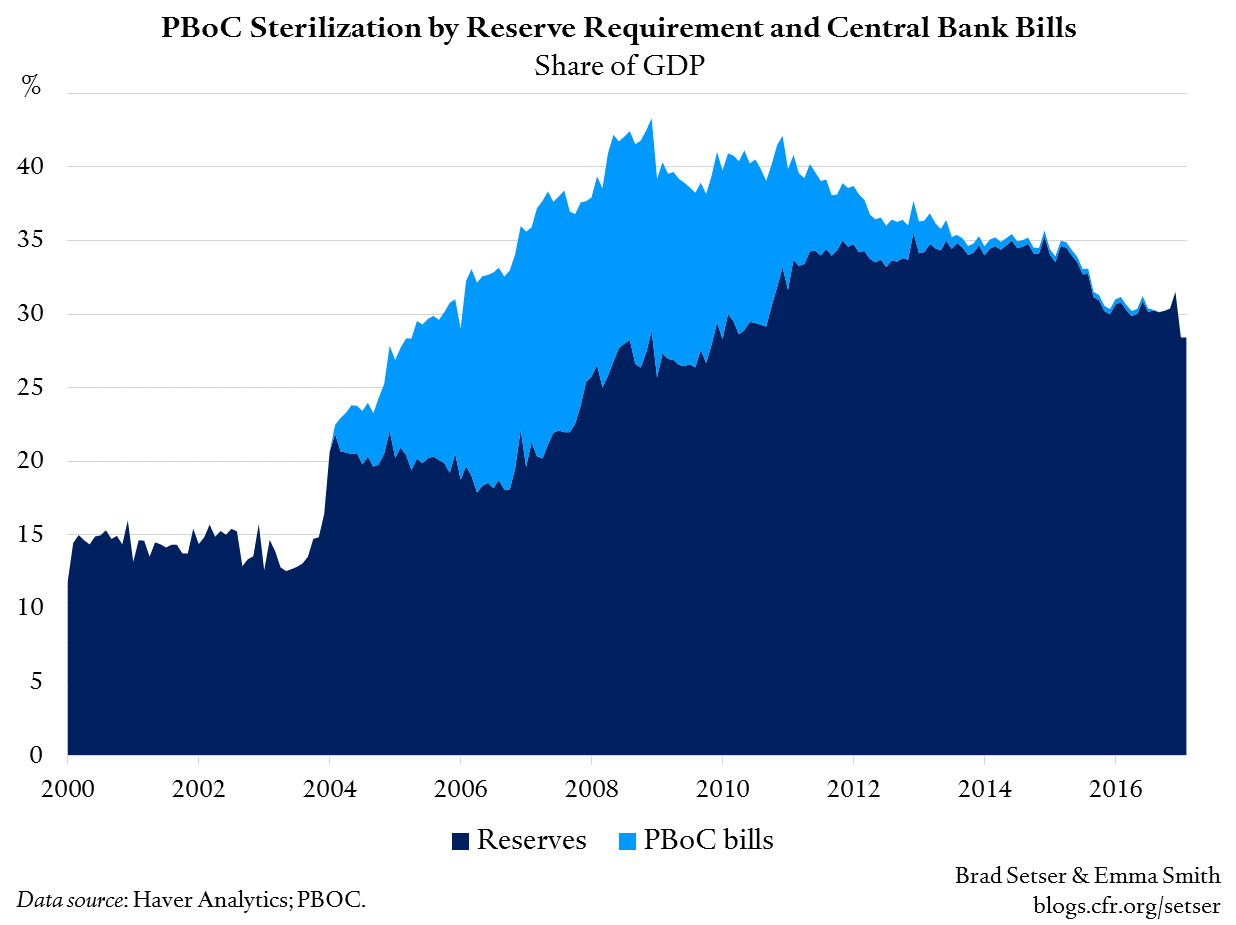 Bottom line: sterilization costs are real, but in important cases, they aren’t a binding constraint that can be relied on to limit intervention. Particularly now, with U.S. Treasury yields moving up.

* Countries with large reserve portfolios like Switzerland and Taiwan can also try to raise the return on the reserve portfolio by taking on a bit of credit risk, or putting a portion of their reserves into equities. Not all of their reserves need to be invested in liquid Treasuries and bunds -- as they clearly hold far more reserves than are needed to provide a foreign exchange liquidity buffer.

** Korea is an interesting case. Won rates aren’t so high that funding a foreign currency book is particularly expensive, but also aren’t so low that there is no cost.