I think it is fair to say that we have reached, for all intents and purposes, step 12 of Nouriel Roubini’s 12 steps to financial disaster -- i.e. "a cascading and mounting cycle of losses and further credit contraction."

"The movements in the FX market are incredible. One friend just read me something which he has received from an fx trader which said that the only things that anyone desires to own are the US dollar,the Japanese Yen, gold, bottled water and bullets"

If 1998 is any guide, these kind of dislocations in currency markets won’t do wonders for the aggregate returns of the hedge fund industry. A host of high carry currencies (i.e. the currencies of countries with high interest rates) have sold off sharply. Look at the euro and Australian dollar v the yen, the Brazilian Real against the dollar and the Icelandic krona against pretty much anything. To facilitate comparison, I set all these currencies at 100 at the end of 2005. 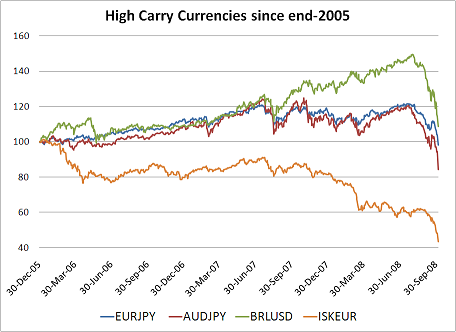 Looking back to 2003 paints only a slightly less ugly picture. 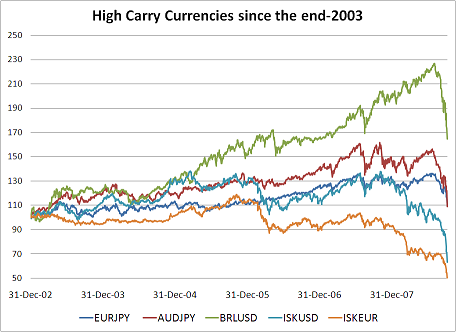 The sell off in high-yielding currencies (and emerging market equities) is evidence a broad-based retreat from any kind of risk. Right now we are seeing huge moves in markets. But there is little doubt that these moves portend a major downshift in global growth, as economies that previously were flooded with credit have to adjust to a very different financial environment.

Treasury yields are now back down to where they were after Lehman’s bankruptcy, more or less.

The Fed has effectively promised to auction off its entire pre-crisis balance sheet to supply the market with liquidity. And since it has increased its balance sheet, it is actually going to be supplying a lot more than $900b of liquidity to the system. Willem Buiter thinks the world’s central banks now either have to guarantee all interbank lending or become the counterparty to all lending among banks. The banks simply don’t trust each other. On current trends, I suspect he is right.