Both are fair questions.

The evidence that SAFE accounts for the majority of China’s US purchases is overwhelming. SAFE own data on China’s net international investment position shows that at the end of 2007, private Chinese investors held less than $20 billion of foreign equities. And that would include private Chinese holdings of non-US equities. Chinese portfolio equity purchases -- according to the China’s balance of payments data -- in the first half of 2008 were also modest. Consequently, it is hard to see how private Chinese investors could account for most of the $100 billion Chinese portfolio in the US survey data.

Moreover, we know from the US balance of payments data that private Chinese investors have been selling US securities other than Treasuries for the last two years. Private Chinese investors (i.e. the state banks) were significant buyers of US securities other than Treasuries (likely various US corporate bonds and some agencies) in 2005 and 2006, but they started selling after the subprime crisis. 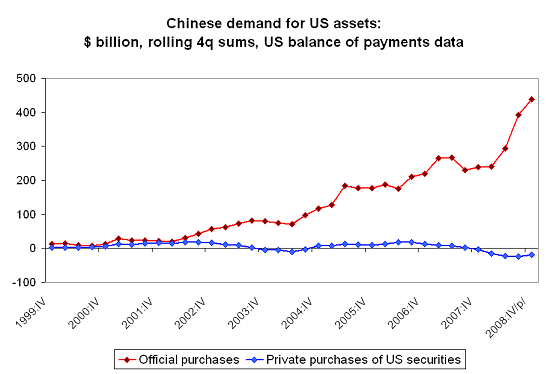 The BEA’s data is here.

Now it is possible that private Chinese investors were selling large quantities of US corporate bonds and Agencies while buying a lot of equities, but that seems unlikely.

That leaves official investors -- and well, I believe the CIC when it says that it remained mostly in cash. That leaves SAFE.

What then is China’s exposure to non-US equities. Here the evidence is more circumstantial. There are various hints that SAFE’s Hong Kong branch was buying into nearly all markets, not the US market. The Telegraph reported in mid September that China held at least 9 billion pounds of British equities, and it hinted, I think correctly, that its methodology for counting China’s holdings likely understated the full extent of China’s portfolio. The Telegraph reported last September:

An analysis by The Sunday Telegraph reveals today that the People’s Bank of China, the country’s central bank, owns shares in many of Britain’s household corporate names, including Cadbury, HSBC, the London Stock Exchange, Marks & Spencer and Tesco. These previously secret investments are in addition to known stakes in BG Group and Drax Group, the energy companies, and Legal & General, Old Mutual and Prudential, the insurers. In total, the stakes held by the People’s Bank are valued at about £9bn, according to the share prices of the companies concerned last week. Many of the shareholdings are held through nominee accounts registered in locations including Hong Kong and are technically held by State Administration of Foreign Exchange (SAFE), the body which sits within the central bank and has the responsibility of managing the forex reserves accumulated from China’s decades-long exports boom.

A number of other FTSE100 companies say privately they believe the People’s Bank of China to be an investor but have not established the paper trail which leads to the shares’ ultimate owners. .... Even allowing for the investments which can be established, however, China’s central bank is now a common name among the ranks of ’institutional’ investors, like the giant pension funds, fund managers and hedge funds, which litter the FTSE. At £9bn, SAFE is now thought to rank among the top 25 investors in the London stock market, underlining China’s status as a global economic powerhouse

SAFE also clearly was buying stakes in various Australian and European companies. Anderlini reported back in September that SAFE’s equity holdings topped the $90 billion the CIC had to invest abroad:

"Before CIC came into existence, however, the State Administration of Foreign Exchange (Safe), the regulator in charge of managing the world’s largest foreign exchange reserves, was already dipping its toe into global equity markets, secretly buying small stakes in large-cap listed western companies. After CIC was founded, Safe ... rapidly but stealthily expanded its programme of building small positions in some of the world’s largest companies. That meant taking a stake in companies such as BP and Total, as well as at least three Australian banks.

According to Chinese media reports that officials in Beijing confirmed as largely accurate, Safe has also used a shadowy Hong Kong subsidiary to build stakes of less than 1 per cent in numerous companies listed in the UK, including BHP Billiton, Rio Tinto, Unilever, Tesco, British Gas, Cadbury, Royal Bank of Scotland and Barclays Bank, as well as in other markets. While some western politicians worried about the transparency and strategic and political intentions of CIC, Safe was building offshore equity positions that now exceed the $90bn (€65bn, £51bn) total that CIC has to spend abroad, according to estimates by people in Beijing familiar with Safe’s operations."

Prior to the most recent US survey, there actually was more solid evidence that SAFE was buying European and Australian equities than that it was buying US equities; the US data only showed a suspicious surge in equities purchased through Hong Kong. That said, I cannot point to an official data release to back my estimate that SAFE had invested a significant sum in non-US equities. An estimated portfolio is just that. Any calculations for the likely mark-to-market losses on SAFE’s equity portfolio are equally a function of that estimate.

One last point: The fact that the US data shows over $400 billion in Chinese official purchases over the last four quarters is rather shocking. And that is the unrevised data. When the results of the last survey are worked in, China’s purchases from mid-07 to mid-08 will be revised up a bit. That said, China’s recorded purchases of US assets are now about equal to its current account surplus. They aren’t likely to get much bigger than they are now unless China’s external surplus rises. And that is the last thing anyone should want.

A bit more to worry about; foreign demand for long-term Treasuries has faded