By way of introduction, I’m brand new to CFR and excited to contribute to this blog. I joined last week as a fellow in CFR’s Center for Geoeconomic Studies, and I plan to write about renewable energy technology, climate policy, and national security—with an eye toward emerging markets. Before CFR, I did stints at McKinsey’s cleantech practice and in municipal government, working on energy policy for Los Angeles Mayor Antonio Villaraigosa. I also studied physics at Stanford and Oxford—my group in Oxford researched third generation solar panels that we hope will one day make colorful coatings for skyscraper windows.

My goal with blog posts will be to focus on developments in alternative energy—I’d also like to integrate discussion of new technology advances when appropriate. As a long-time fan of this blog, I’m looking forward to contributing often, and I’m always open to suggestions and feedback.

Under new Prime Minister Narendra Modi, India hopes to become the “renewable energy capital of the world.” So far, India’s ambitious targets for solar and wind deployment—second only to those of China—have attracted a flurry of foreign renewable energy companies eager for the business-friendly contracting policies promised by the government. Announcing aspirational goals to elicit a windfall in foreign financing could prove a clever strategy to bootstrap a thriving renewables industry—but beyond the fanfare, few details are forthcoming on how the government will actually improve the investment climate and why renewable energy will meet India’s underlying energy needs.

Last month, Finance Minister Arun Jaitley released India’s new budget, which presents more questions than answers about how the government plans to fund the push for renewable energy. The major news is a proposal to fund renewable projects by doubling the coal tax for the second consecutive year, this time from ~$1.60 to $3.20 per metric ton (for context, the new tax is about 10% of the price of coal). Although this would bring in about $2 billion per year, a staggering gap remains to meet the $100 billion commitment that Prime Minister Modi made toward reaching his renewable energy targets of 100GW of solar and 175GW of total renewables by 2022. In theory, the coal tax revenues will embolden foreign investors to contribute the required capital, and at present there is plenty of interest from foreign firms to develop large renewable energy projects—whether they will follow through with the projects is unclear.

Each question is in itself a serious research project, but we can develop some intuition around the answers. Specifically, it looks like the Modi government may be using aspirational goals as a clever but risky tool to fast-forward development of its renewable energy sector. Renewables may also be particularly convenient to rally the nation around a “win-win” on energy security and environmental protection, though their value as the primary policy instrument for those goals is questionable.

Question 1: Are the renewable targets achievable?

Probably not—the targets are likely too ambitious. Consider solar, the centerpiece of the renewable goals: the government raised the solar target from 20 GW to 100 GW by 2022. For context, today India has installed somewhere between 3 and 4 GW—achieving 100GW will require more than a 50% CAGR for the next 8 years. Germany, the world leader in installed solar, is only targeting 66 GW by 2030; although India is right to assert that its sunnier climate makes it a more natural solar world leader, it isn’t so easy to leapfrog decades of German industry growth and maturity.

The problem is that, despite the sun, India is not a great place to finance capital projects. Although foreign companies recently pledged over double the 100GW goal, those commitments do not mean much—foreign equity investors will still have to produce the lion’s share of capital to finance these projects, and most are wary given India’s high rate of stalled capital infrastructure projects. Market, credit, and counterparty risk all increase the cost of capital, making it difficult for solar to compete with coal even as the cost of solar in India has tumbled over the last five years.

Even if the government is successful at reducing the cost of capital, providing predictable price signals through harmonized state renewable incentive programs and attracting reliable foreign investors, the grid would likely be overwhelmed by the massive amounts of intermittent generation coming online (consider that total Indian generating capacity is currently 250GW, and the government’s proposal is for 160GW of wind and solar, or 25% of all installed generating capacity, by 2022[1]).

All of this is to say that India may well accelerate the pace of its renewable energy deployment—but targets of 100 GW of solar and 175 GW of total renewables in a bid to lead the world are likely unrealistic.

Question 2: Assuming the targets are not achievable, is it wise to set aspirational but unrealistic goals?

This answer is certainly not as clear as the previous one. What is clear is that the government’s strategy is riskier than a more modest set of goals. Through flashy goals, India has attracted a lot of foreign investor attention, and a virtuous competitive cycle is emerging where established players are competing for a piece of the Indian renewables pie (American solar firms SunEdison and First Solar recently announced 15GW and 5GW commitments, respectively). However, if the financing climate does not improve and/or adequate policy support does not materialize, India will be left with massive unfinished projects and a further tarnished foreign investment reputation.

The logic behind aspirational targets is to harness parallel, rather than serial, progress toward an end-state—that is, to achieve the prerequisites for renewable deployment simultaneously, rather than one-at-a-time. The government does not want to first implement economic reforms to drive down the cost of capital before then attracting project finance—it wants to use the financing as a catalyst for state-level reform. Similarly, rather than sequentially install solar after the cost comes down, the government hopes to drive down costs while local industry springs up to support projects funded by foreign dollars. And, most importantly, rather than retrofit the grid to handle increased renewable penetration, the government hopes to attract even more foreign funding for distribution infrastructure upgrades, sparked by domestic renewable deployment. The risks, however, are great—for example, utilities collapsing under the strain of integrating expensive renewables could thwart the energy security that Modi is after.

There is a final implication of India’s preference for explosive renewable growth rather than controlled deployment: most solar deployment will likely be at the utility-scale, rather than through distributed installations. The easiest way to meet a big target is to work with a few developers on immense projects—the financing is easier, and permitting and land acquisition are more tractable for a single project rather than for a multitude. However, distributed solar could bring unique benefits in India, including a lower risk of cascading blackouts and the potential for urban microgrids that improve power reliability without requiring profound utility reform. It would be unfortunate if the rush to meet ambitious renewable targets encouraged Indian policymakers to bypass distributed solar in favor of centralized renewable power plants.

Question 3: Does the focus on renewables make sense for India’s energy policy objectives?

India has clearly chosen renewable energy, and in particular solar, as its flagship energy initiative—does that make sense given its objectives for energy policy? We can separate these objectives into two categories: (a) increasing energy security and (b) mitigating environmental impacts. Renewable energy advances both objectives, but it is not clear whether ambitious renewable targets are the optimal policy instrument for either.

McKinsey recently forecasted that India would be dependent on imports for 50% of its energy consumption by 2030 (Disclaimer: I worked for McKinsey’s Cleantech Practice until this month). The figure below graphically illustrates the various options for reducing this import dependence—accelerated deployment of renewables (option #5) actually ranks in the bottom half of potential initiatives. This dovetails with the insight that wind and solar are intermittent resources that do not actually contribute much to a utility’s dependable capacity. Rather, India is projected to double its coal consumption by 2035, so producing domestic coal is far more important for energy security than renewable energy. 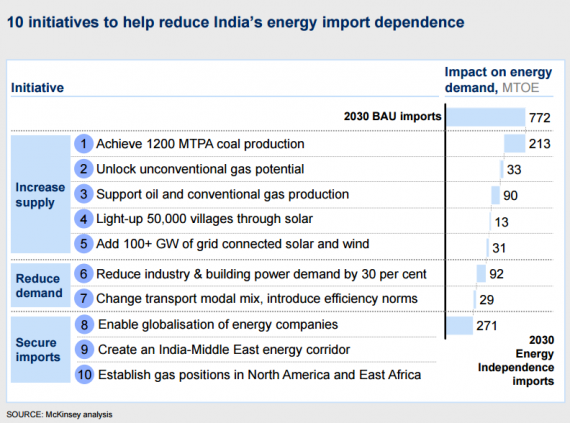 What about India’s environmental objectives with energy policy—India suffers crippling air pollution and is increasingly an important contributor to climate change—are renewables the right tool here? Unlikely, given that renewables will not displace planned coal power plants—rather, recent moves to introduce higher taxes on petroleum and coal are much more promising. Renewable portfolio obligations, the primary mechanism by which India aims to hit its renewable targets, can be twice as costly in reducing emissions as carbon taxes.

There is a lot more that India can do to better price in the environmental externalities of fossil fuels. For example, the annual Economic Survey that accompanied the latest budget suggests that there is further room to increase the coal tax—doubling it would make domestic and imported coal the same price and reduce national CO2 emissions by 11% (this price of coal would still not come close to pricing in the health externalities of pollution).

Although the renewables push optimally addresses neither energy security nor environmental objectives, the optimal policies for each objective oppose each other. That is, increasing domestic fossil fuel production improves energy security but also increases pollution. Renewables, by contrast, result in progress on both fronts, though perhaps at higher cost and lower efficacy. This “win-win” could explain why the government has chosen to hype renewables; still, it will be important for policymakers to sort out their domestic priorities and confront the trade-off between energy security and environmental protection. Internationally, it will be interesting to see how India’s flashy commitment to renewables and weaker plans on emission reduction are received by the rest of the world.

[1] Existing capacity and targeted renewable capacity numbers are apples and oranges, because wind and solar have much lower capacity factors than the current Indian fossil fuel generation mix. However, the two quantities can be compared to get a sense of peak penetration, which can seriously impact grid reliability. A rule of thumb is that the 15% renewable penetration level is the ceiling above which grid upgrades are necessary to handle more renewable integration.

Five Things I Learned About the Oil Price Crash