But exports are only half the trade equation.    And the export boom didn’t start in late 2005.  It actually started back in mid-to-late 2003, when the dollar’s slide first started to have an impact.  In 2003, 2004 and 2005, both residential investment and exports were rising relative to GDP.

While the pace of export growth perhaps picked up a bit in late 2007, the overall pace of growth has actually been fairly steady.  The big change recently hasn’t been a sudden increase in the pace of export growth, but rather the deceleration of import growth, particularly non-oil imports.  That is what has allowed net exports to contribute to overall growth, offsetting the drag from the (sharp) fall in residential investment. 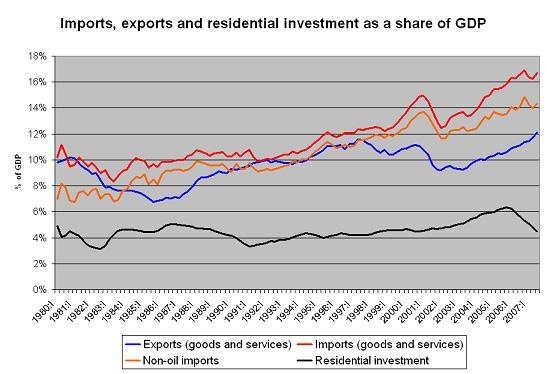 Trade isn’t the only way the global economy impacts the US economy.   Investment income is also increasingly important – and something I want to explore in more detail over the course of the year.   Some of the rise in investment income (relative to GDP) is likely artificial – the “shadow banking system” did a lot of offshore intermediation for tax reasons.    Some of it is real – as Americans increased their holdings of foreign assets and foreigners (especially central banks and oil funds) increased their holdings of US assets.  And some of it reflects the rise in US interest rates since 2004 – as the following chart shows, investment income fell relative to GDP from 2002 to 2004, and then started to rise. 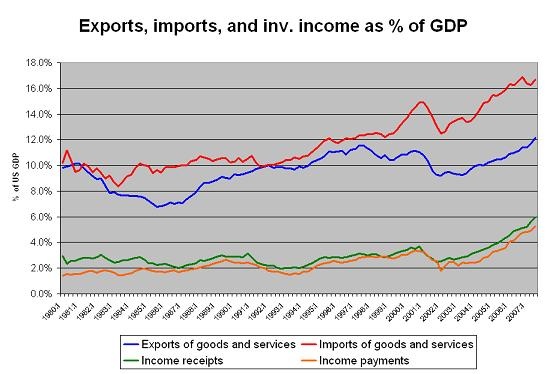 The surprise, at least to me, is that the pace of increase in US payments to the rest of the world slowed in the first part of 2007 (it ticked up in q3).    Sure, US policy rates stopped rising and are now falling.    But that isn’t really what drives the data.   At least not yet.   And some of the impact of the fall in policy rates should be offset by higher spreads.

The real key is that the interest rate the US pays on its borrowing stopped rising and sort of stabilized at a rate well below the rate the US gets on its lending.    That really helps.  And it is a noticeable change from say 2000, when both rates were roughly the same.

Better not sell too many convertibles.

Over time, though, I still expect the small surplus in the income balance to disappear, though the US rate cutting cycle may slow the change.

And I am also convinced that tax arbitrage ends up overstating US imports (notably from Europe) and overstating US income receipts (notably from Europe), as firms do things like import Pepsi concentrate from Ireland to increase their offshore profits to cut their overall tax bill.   Absent these distortions, the US trade deficit would be a bit smaller (though still big) and the income balance likely would already show a deficit.