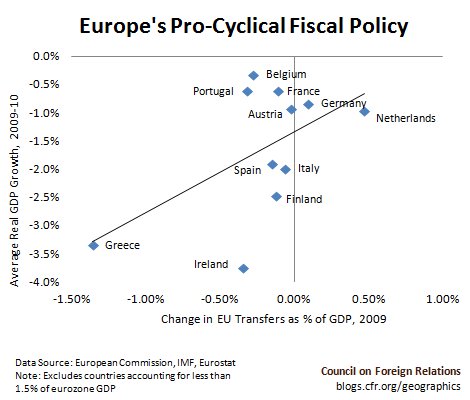 “It is time for a breakthrough to a new Europe,” German Chancellor Angela Merkel said on November 9th.  “That will mean more Europe, not less.” Merkel wants a stronger fiscal union with strict controls on eurozone national budgets.  Yet to date EU fiscal policy, such as it is, has meant ill-considered pro-cyclical spending programs – as shown in the graphic above.  Greece was and is a large recipient of EU transfers, yet those transfers collapsed by 1.3% of Gross Domestic Product (GDP) after it was forced to cut back on its contributions to EU-subsidized projects in an effort to slash government spending.  This additional fiscal squeeze hurt growth; Greek GDP fell an annual average of 3.5% in 2009 and 2010.

Steil: Why Draghi Can't Be Bernanke