Want to understand the energy challenges the world might face in the future? There are few better places to turn than this year’s BP Energy Outlook to 2030, an annual publication that shows the company’s projections for energy supply and demand over the next two decades. The three graphs below highlight some of the trends likely to define the energy landscape in the years ahead, in BP’s view. 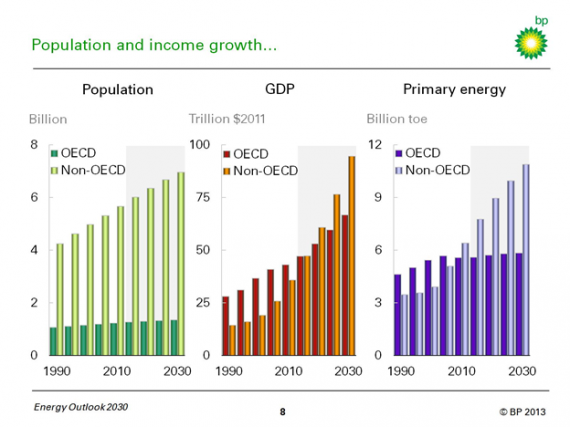 Two decades from now, a world with more people and higher average incomes will mean more demand for energy. That shouldn’t be a surprise. What’s more striking is to see where all this growth will happen. In BP’s forecast, low and medium income economies outside the OECD will account for a full 90 percent of population growth between now and 2030, and their GDP will climb much higher. These same countries will also contribute to 90 percent of all the energy demand growth over that time, roaring ahead of the developed world. 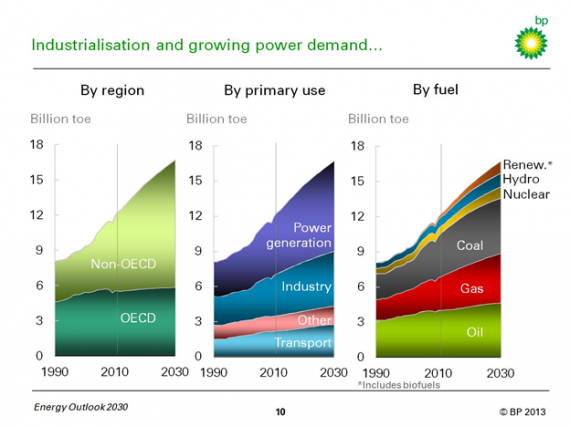 In the developed world, energy consumption will barely tick up. Just 0.3 percent per year, in fact, until 2030. That would actually be a decline in per capita terms. Again, almost all of the growth in energy consumption is in non-OECD countries.

And where will the world get its energy? If BP is right, fossil fuels will still dominate the energy mix. Renewables will be the fastest growing sources of energy, but given the relatively tiny piece of the pie they make up today, they’ll still be far from dominant. No other energy sources will see the scale of consumption growth that coal and natural gas will, in absolute terms. 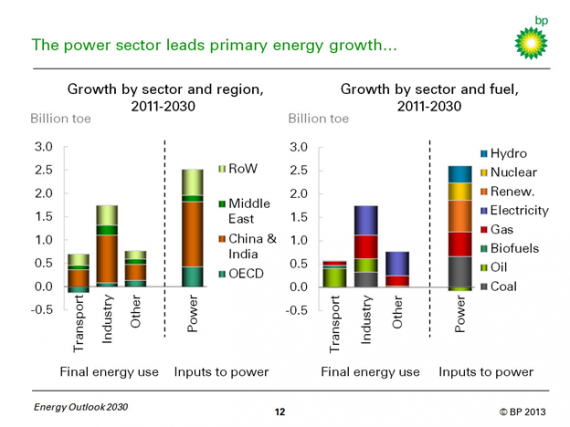 Demand for electricity will grow by leaps and bounds. China and India alone will account for a huge part of that new power consumption. The OECD will only see a little growth in that area, relatively speaking, for all its economic clout.

The developed world will actually use less energy for transportation than it does now. Again, low and middle income countries will be at the very center of the picture when it comes to growing appetite for energy over the next two decades.

There will undoubtedly be surprises between now and 2030. If the last decade has taught us anything about energy, it’s that old truths can change suddenly. Given the complexities involved and all the variables that could change between now and then—whether in terms of technology, public policy, or prices—no long-term energy forecast will turn out to be right on the money. But sources like this Outlook are a great way to get a sense for what smart people in the energy industry see as they try to look ahead.

Three Graphs That Resource Pessimists Don’t Want You to See