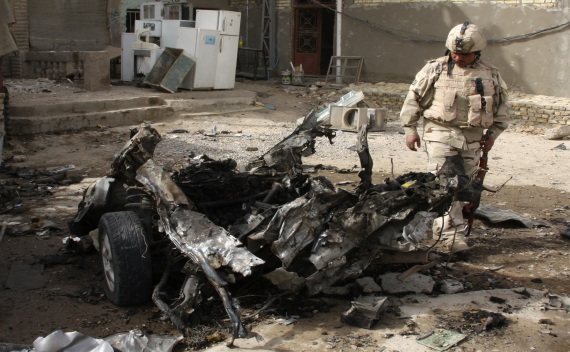 Last month, Secretary of Defense Leon Panetta was asked if the Iraqi government would request that U.S. troops stay in country beyond the mutually-agreed upon withdrawal date of December 31, 2011. Panetta replied: “My view is that they finally did say, ‘Yes.’ ” Soon after, Ali al-Moussawi, adviser to Prime Minister Nuri al-Maliki, corrected Panetta’s statement and affirmed that there would be no discussion of extending U.S. troop presence in Iraq beyond year’s end.

Throughout the summer, U.S. military and civilian officials had hoped to keep 10,000 troops in Iraq for two reasons. First, the troops would prevent Iran from supplying improvised explosive devices and rockets to Shia militants in Iraq who have used such weapons to kill U.S. soldiers. However, as Lt. Gen. Mike Oates (ret.) former commander of U.S. forces in southern Iraq, stated: “There have been no reported incidents in which American forces have actually interdicted Iranian munitions while in transit.” Thus, 10,000 troops would be assigned a mission that 166,000 could never accomplish.

Second, officials believed that maintaining 10,000 U.S. troops would mitigate Iran’s long-term influence in Iraq. Here, the problem was that two brigades worth of American combat power—living under severe host-nation operational constraints—could not  counterbalance Iran’s overwhelming strategic interest in its neighbor’s political makeup and extensive use of combination of hard and soft-power initiatives.

Recently, White House and Pentagon officials have revised and reduced their expectations, and have proposed maintaining around 3,000 U.S. troops in Iraq beyond 2011, but only for training security forces. (The Obama administration is also considering keeping a small force in Kuwait on six month rotations, which would reportedly “rotate into Iraq for limited periods, and return to Kuwait.”)

This new reduced number is not tied to any strategic logic or rule-of-thumb for troops required to train security forces. Rather, as the Washington Post reported late last week: “The estimate of 3,000 to 5,000 troops reflects a general consensus on what is politically feasible in Iraq and the United States.”

Moreover, as Brookings Institution analyst Kenneth Pollack pointed out yesterday, 3,000 troops would be unable to play any peacekeeping role, gather intelligence, support reconstruction and development, or conduct unilateral counterterrorism raids. In short, “a force that small will have a very hard time protecting itself, let alone other American personnel in Iraq.”

Yesterday, further complicating the matter, Senator Lindsey Graham of the Senate Armed Services Committee stated that keeping 3,000 US troops in Iraq would be “one of the biggest blunders in American foreign policy.” Graham added that, “No one has suggested anything really from the Pentagon below 15 to 16,000.”

Amazingly, just seventeen days before the State Department assumes full responsibility for all U.S. government employees in Iraq, and 109 days before all U.S. forces are required to be withdrawn, the United States and Iraq have not begun formal discussions on the size or composition of a potential force.  Back in April, Admiral Michael Mullen, chairman of the Joint Chiefs of Staff, warned, “Should the Iraqi government desire to discuss the potential for some U.S. troops to stay…it needs to start soon -- very soon -- should there be any chance of avoiding irrevocable logistics and operational decisions we must make in the coming weeks.”

Weeks have turned into months, and Washington and Baghdad are no closer to a joint agreement of what U.S. military presence, if any, should remain in Iraq. Of course, the United States has a strategic interest in supporting a stable and democratic Iraq that can defend its sovereign territory and does not further destabilize the region. As in other countries that the United States has a strategic partnership with, this effort should be led by the State Department in Washington and by the U.S. embassy’s Office of Security Cooperation in Baghdad. Indefinitely sustaining America’s military presence in Iraq is not required, nor has it been justified by any of the arguments put forward by the Obama administration.