Benn’s new book The Battle of Bretton Woods has been called “the gold standard on its topic” by the New York Times, “a triumph of economic and diplomatic history” by the Financial Times, and “a superb history” by the Wall Street Journal.  But Eric Rauchway is having none of it.  He’s dinged the book twice now, its only two negative reviews—first for the IMF’s Finance & Development and then, in an extended dance remix version, for the TLS.

Wade through the snark-infested waters, and you’ll find that Rauchway has two substantive complaints: that Benn doesn’t understand the gold standard, and that he bases his account of Harry Dexter White’s role in the crafting of the FDR administration’s 1941 “Ten-Point Note” ultimatum to Japan on “fake” documents.  Serious stuff.

So let’s start with gold.  “Contrary to Steil’s account,” Rauchway writes, “monetary gold stock did not generally move across borders.”

Now Rauchway is not an economist, but presumably he can read.

During “the years 1880-1913,” Benn writes on page 20, “governments around the globe had allowed an unprecedented degree of activity within and between their nations to be regulated by the market-driven transfer of gold claims across borders (the physical stuff itself just shifted around in central bank vaults).”

Get a sense that there’s a pattern forming here?  Moving right along . . .

Rauchway takes specific issue with Benn’s claim that under the classical gold standard “when gold flowed in [the authorities] loosened credit, and when it flowed out they tightened credit,” arguing that this is “at odds with historical evidence.” 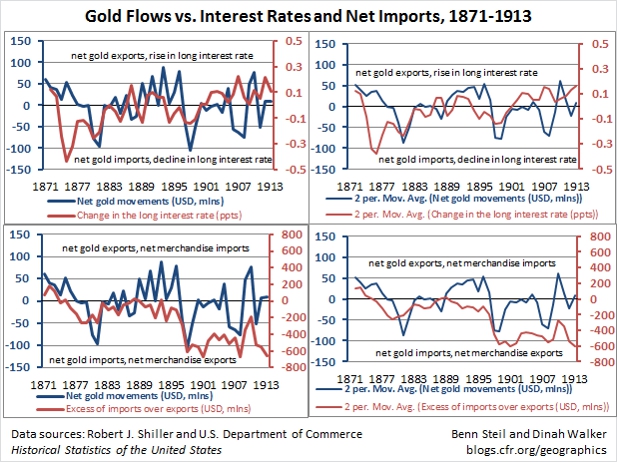 During what Rauchway describes as “the heyday of the gold standard,” we can in the top two figures see that long interest rates did indeed tend to rise when gold was flowing out of the United States and fall when gold was flowing in.  This is particularly clear in the 2-year moving average figure on the right.

Rauchway goes on to say that theoretical models which have countries losing gold when they import more than they export were not realized in practice.

Economics lesson finished.  On to history . . .

The Battle of Bretton Woods, according to Rauchway, claims that “[Harry Dexter] White caused the attack on Pearl Harbor.”

Benn’s book claims that White authored the key ultimatum demands contained within the Ten-Point Note (and not the entire “Hull memo of November 26,” as Rauchway wrongly puts it), and that a wartime Soviet intelligence operation codenamed “Operation Snow” was engaged to motivate White, with the aim of “provok[ing] war between the Empire of the Rising Sun and the USA and to insure the interests of the Soviet Union in the Far East,” according to GRU military intelligence colonel Vladimir Karpov.  Benn writes on page 58 that “The significance of Operation Snow lay not in White acting as he did because he was so prodded, and certainly not in acting against what he believed to be American interests; rather, it is that the Soviets believed that White was influential and impressionable enough, and that conflict between the United States and Japan was important enough, that they chose to use him in pursuit of their aims.”

Rauchway writes that Benn’s “historical backup [is] a book by Jerrold and Leona Schecter called Sacred Secrets (2002).” He then invokes historians John Earl Haynes and Harvey Klehr to argue that “the documents on which the Schecters relied for their discussion of White” are “fake.”

After reading Rauchway’s TLS review, Haynes and Klehr wrote the following to the journal’s editors, which was published on April 26:

We are flattered that Eric Rauchway mentioned our article in Intelligence and National Security (October 2011) in his review of Benn Steil’s The Battle of Bretton Woods.  In that article we noted the use of what evidence indicated were faked documents in Gerald and Leona Schecter’s Sacred Secrets.  (We assume the faked documents were foisted on the Schecters by unscrupulous Russian sources.)  We are also flattered that Steil relies heavily on our work on White’s espionage.  But, our account does not, as Rauchway suggests, undermine Steil’s story of White’s treachery or imply that he was bamboozled by fake documents.  In fact, Steil cites the Schecters only once in his whole book.

Standpoint: The Moneybags and the Brains