Rose Yu and Amy Or’s Wall Street Journal story on China’s reduced appetite for Agency bonds is loaded with interesting detail. And not just about the fall in Chinese state banks’ holdings of Agencies.

The fact that the Chinese state banks only held $23 billion or so of the $463 billion* or so of Agency bonds that China holds, according to the US data, confirms what I suspect was more or less known: the State Administration of Foreign Exchange holds the lion’s share of China’s Agency bonds. Remember too that the US data almost certainly understates China’s true holdings of Agencies.

Two other details in the story were more interesting, at least to me:

One: The big state commercial banks have $459 billion in "overseas" assets. That is way more than the CIC.

"China’s banks have significant overseas funds to deploy. Bank of China had $240 billion of overseas assets at the end of June, while the other three big lenders had a combined total of $219 billion."

That sum exceeds the foreign exchange reserves of all but three central banks (China, Japan and Russia) and (in all probability) all but one sovereign wealth fund (ADIA). The state banks foreign portfolio is way larger than the CIC’s external portfolio.** Though, given that the CIC formally owns the state banks, it may well make more sense to add the state banks’ $460 billion or so to the $100 billion held by the CIC. That would imply that the CIC already could give ADIA a run for its money -- as recent statements by the al-Nahyan family suggest ADIA doesn’t have the $800 billion commonly claimed.

Two: China’s state banks haven’t exactly been a stabilizing presence in global markets over the past year.

To be honest, I haven’t quite worked out how all the different data sources (the information the state banks disclose to their shareholders, the BoP data and the PBoC data) add up. China’s NIIP data suggests that Chinese investors held $240 billion in external assets -- and most of that is debt. Most of that comes from the state banks, but it also leaves out around $250 billion of the state bank’s total foreign assets.

Setting that caution aside, Both China’s balance of payment data and the PBoC’s data on the state banks tell a similar story.

The PBoC data indicates that the state banks were big buyers of foreign debt (portfolio investment) from late 2005 to the middle of 2007 -- and then turned into big sellers. Their holdings peaked at above $195 billion in the second quarter of 2007. Data on the PBoC’s mandarin site indicates that they subsequently have fallen to under $145 billion - even as the line items that I think correspond with the bank recapitalization and the state banks’ swaps with the PBoC have continued to grow. 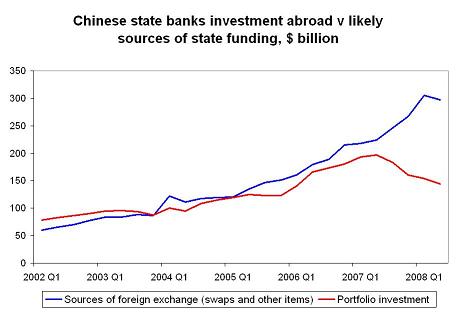 That fall is consistent with the Chinese balance of payments data, which shows $13b of sales of foreign debt in 2007 -- after over $100 billion of purchases in 2006. Sales of $23 billion in the second half of 2007 topped purchases of $10 billion in the first half of 2007 (no data is available yet for h1 2008). It also matches up with the US data. The evidence that Chinese state banks have been scaling back their holdings of risky assets is overwhelming. First "subprime." And now Agencies.

China is now a bit like Abu Dhabi. They are a lot different pools of foreign exchange floating around, but all are controlled in one way or another by the state.

The debt sales of China’s state banks call into question all the talk about how sovereign investors in general and sovereign funds in particular have been a stabilizing presence in global markets.

Whenever I read such a claim (for example, this Reuters’ article on the SWF’s new set of good practices, claims "During the current financial turmoil, which began in the U.S. housing market, wealth funds have proven to be market stabilizers"), I wonder how exactly anyone could know how sovereign investors -- counting state banks and central bank reserve managers as well as the wealth funds -- have impacted the market.

After all, there is no aggregate data available on sovereign funds total portfolio. And I don’t think the publicly available data is strong enough to support any strong claims about the overall impact of sovereign investors on the market.

We know that sovereign funds have injected money into US and European banks and broker-dealers. And each dollar of bank equity is leveraged up, so it supports a larger portfolio. The new capital injections have limited the extent to which banks have had to scale bank their balance sheets to match their scaled-back capital. That is stabilizing. Absent these investments, there likely would be even more distress in credit markets than there is.

But sovereign investors -- paced by the Chinese state banks, who are owned by a sovereign fund and manage external assets for that sovereign fund and the central bank -- also seem to have lost their appetite for most risky assets. Total net foreign purchases of US equities are down over the last 12 months. Chinese state bank’s have stopped buying certain types of US debt. More recently central banks have shied away from the Agency market.

That by contrast isn’t stabilizing.

The latest BIS banking data suggests that private banks are fleeing risk and stocking up on government bonds. State banks can not really be criticized for acting like private bank and reducing their exposure to risk assets. At the same time they can hardly be lauded for using their deep pockets to stabilize the market. Right now there is no shortage of demand for Treasuries, while riskier forms of debt are available at a nice discount ...

Assessing the overall impact of sovereign investors on the market, in my view, requires data that the sovereign funds -- and key central banks -- haven’t been willing to release. There are, after all, persistent rumors that state investors have been large players in the "paper" commodity market.

So what are China’s state banks doing with the money they aren’t using to buy US securities?

Yu and Or suggests that they are increasingly looking to lend to Chinese state firms seeking to expand abroad.

Syndicated lending is one of the few bright spots in the banking business, analysts said, in part because borrowers have shied away from issuing debt in the face of higher yields. Using more of their overseas funds for corporate lending would help build Chinese banks’ international experience. "Given the fact that a lot of Chinese companies are seeking overseas expansion, it’s a good opportunity for cash-rich big Chinese banks to develop a syndicated-loan business," said She Minhua, a banking analyst at China Securities Co.

The magnitudes involved are still rather small -- and probably too small to account for the full gap between the state banks’ reported foreign assets and the reported foreign portfolio holdings of Chinese investors other than the central bank.

But they easily could grow. I at least have a hard time seeing how Chinese state banks’ current ability to borrow foreign exchange from China’s central bank to lend to Chinese state firms looking to expand abroad quite fits into a story where the state pulls back from the commanding heights of the global economy.

The Chinese state’s efforts to support Chinese exports by holding the CNY down have effectively made large sums of foreign exchange available to Chinese state firms looking to expand abroad. Reserve growth has helped to fuel the outward expansion of state capitalism.

That, in some sense, is a bit of a surprise. Ten years ago few expected that in the twenty-first century private banks would be cash-constrained and state banks cash-rich. And that the way states invest would matter to more markets than ever before.

* This sum includes China’s likely holdings of short-term Agencies. China’s long-term Agency portfolio, according to the US data, was around $446 billion at the end of June.

**The CIC, incidentally, doesn’t seem to have made large external equity investments yet; this SWF radar report suggests that the process has only started

Yes, Virginia – Creditors do sometimes get a vote …