Above the Fold. Anthony Shadid, a New York Times foreign correspondent, died yesterday while covering the ongoing political upheaval in Syria. He wasn’t cut down by the violence of what is becoming a civil war. He was instead the victim of an asthma attack. I never met him, so I don’t know whether he went by “Anthony,” or “Tony,” or something else. But I read his reporting religiously. He was exceptionally good at what he did—and his peers recognized him for it. He won not one, but two, Pulitzers for his coverage of Iraq while he worked at the Washington Post. And to judge by the testimonials that have been written and posted over the past twenty-four hours, he had no shortage of people who loved his work .

Now it has become habit in the United States to complain about the media. The lines to radio talk shows light up when the subject is raised, and academics regularly sift through stories searching for signs that journalists smuggled opinion into their prose. But I have nothing but admiration for Mr. Shadid and the job he did. It’s not just that every day he and his colleagues bring news and insight that illuminate the world. It’s that they willingly run considerable risk to get those stories. Mr. Shadid was shot while covering protests in the West Bank, harassed by Egyptian police while reporting on Hosni Mubarak’s fall from power, and just last year arrested and beaten by Libyan militiamen who killed his driver. And just consider how Mr. Shadid got to Syria: he traveled at night to an isolated spot on the Turkish-Syrian border, wriggled through a barbed-wire fence to meet his guides, and then traveled by horseback into Syria. That’s bravery, that’s determination, that’s commitment. Thank you, Mr. Shadid. You will be missed.

CFR Event of the Week. America is getting older. Our median age is 36.9 years, up from 30 years in 1980, and it will go higher as Baby Boomers continue to age and relatively fewer Americans are born. An aging population has obvious demographic and fiscal consequences: greater demands on Social Security and Medicare, and relatively fewer Americans to pay for those benefits. Does this mean trouble ahead for American competitiveness in the global economy? CFR Adjunct Senior Fellow Michael Hodin sat down with Kelly Michel, a senior executive at AEGON, and Dr. Joe Coughlin, who runs the MIT AgeLab, to consider what might seem like a counter-intuitive proposition: an aging American population can help drive American competitiveness. You can read the transcript, watch the video here or below, or download the audio before you hit the gym and fend off old age yourself.

Read of the Week. It’s not short. It’s not sweet. But it is indispensable. By “it,” I mean the Fiscal Year 2013 Budget of the U.S. Government. If you want to know what Washington is spending your tax dollars on, this is the place to start.

Blog Post of the Week. Josh Rogin has the behind-the-scenes story of the resolution that thirty-two senators—sixteen Democrats and sixteen Republicans—introduced yesterday calling on President Obama to “oppose any policy that would rely on containment as an option in response to the Iranian nuclear threat." But if containment is not an option, and Iran does not suddenly capitulate, that leaves only one option: war. But the sense-of-the-Senate resolution quite pointedly does not authorize or direct the president to use force against Iran. “That is a debate for another day,” is how one of the resolution’s co-sponsors, Republican senator Lindsey Graham of South Carolina, put it.

Poll Question of the Week. Where does the American public stand on the question of growing tensions with Iran? A Pew Research Center poll out this week found that nearly six-in-ten (58 percent) Americans say the United States needs to prevent Iran from developing nuclear weapons, even if it means taking military action. Just 30 percent say it is more important to avoid a military conflict with Iran. What about the view from Iran? According to a Gallup poll, Iranians are split on the question of developing a nuclear weapon. Nearly six-in-ten Iranians (57 percent) favor developing nuclear power. But when it comes to developing nuclear weapons, the number drops: 40 percent approve, 35 percent disapprove, and 24 percent have no opinion. Neither poll, however, frames the question in terms of costs: how much blood and treasure are Americans willing to risk to keep Iran from going nuclear? How much are Iranians willing to risk to become a member of the nuclear club? Support for action is always higher when the bill is not mentioned.

Chart of the Week. As the “Read of the Week” implies, President Obama released his proposed FY2013 budget this week. You might have read or heard in the news coverage/commentary that he is looking to cut defense by nearly half a trillion dollars. Indeed, he said as much. But is Obama in fact cutting defense spending?

Well that depends on how you measure a cut. When the president talks about cutting $487 billion from the defense budget over the next ten years as required by the 2011 Budget Control Act—that is, last summer’s deal to get the debt ceiling raised—he’s talking about cutting from previous projections of future spending. Of course, projections have no legal weight. Congress is not bound to appropriate funds because some past projection assumed it would. Projections are just guesses or hopes.

When most people outside the Beltway talk about cutting spending, they have in mind spending less this year than was spent last year. By that measure, as the chart below shows (PDF), Obama’s proposed “base defense budget”—that is, excluding the costs of prosecuting the war in Afghanistan—drops $6 billion in FY13 to $525 billion and then rises gradually to $567 billion in FY 2017. If you control for inflation, Obama’s defense budget would essentially be flat over the next five fiscal years. 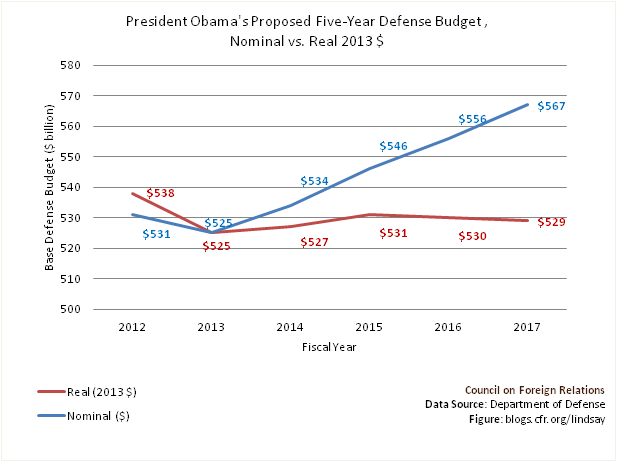 These distinctions will almost certainly get lost in the public discussion. This, after all, is a presidential election year. So the ordinary confusion surrounding how Washington budgets its money will be supplemented by partisans on both sides looking to score political points rather than to help people understand what the government is and isn’t doing. And of course there is that other small issue that we all know from our personal lives but that get tossed aside on the campaign trail: it matters far less how much you spend than what you get for your money.

Too Good Not to Note. Elizabeth Economy thinks that Xi Jinping’s visit won’t solve the U.S.-China trust deficit. Evan Osnos adds his thoughts on Xi’s American journey. John Cassidy handicaps the race to succeed Robert Zoellick as president of the World Bank. Achim Steiner, Adnan Amin and Kandeh K. Yumkella discuss the many challenges of bringing electricity to Africa. Nouriel Roubini remains pessimistic about the global economy. Mohamed El-Erian worries that Greece could go the way of Argentina circa 2001 and suffer the mother of all economic sudden stops. Russell Shorto describes the way Greeks live now.

Perils of Prediction. “Atomic energy might be as good as our present-day explosives, but it is unlikely to produce anything very much more dangerous.” Winston Churchill, 1939. Churchill was prophetic about many things, but not about nuclear weapons.

Quote to Ponder.  "Doubt is not a pleasant condition, but certainty is an absurd one." Voltaire, November 28, 1770.

A Reason to Smile. Grace Slick, Jefferson Airplane, and the Psychedelic Sixties.