Above the Fold.  President Obama’s trip to Asia has been in the news this week. What caught my eye, however, was neither the announcement that the United States will soon base 2,500 U.S. Marines in northern Australia nor Beijing’s overheated reaction to that plan. Richard Haass and Liz Economy have that America-in-Asia angle covered. I was struck instead by two news stories about American universities and Asia. The first story covered the announcement by the University of California, Berkeley, which is regularly ranked as the best public research university in the country, that it plans to open an engineering research and teaching center in Shanghai. Berkeley is following archrival Stanford, NYU, Duke, and several other American universities in setting up shop in China. In doing so, Berkeley got a good deal—the Chinese are building the facility and throwing in a five-year rent-free lease. In the second story, the Institute for International Education posted data showing that the number of Chinese students in the United States rose 23 percent in 2010 and now stands at 157,558; there are now more students from China than from any other foreign country. Both stories make clear that future U.S.-Sino relations will be far more complicated than U.S.-Soviet relations were. How many American colleges looked to open up satellite campuses in Leningrad during the cold war? Perhaps even more important, the two stories show just how much the United States dominates global higher education. It is the brand to beat. But will the United States maintain its tradition of superb universities, especially its public research universities? In a climate in which federal and state governments are slashing spending, there are reasons to be worried. Advice to policymakers:  pennywise can be pound foolish.

CFR Event of the Week. Sir Michael Barber, an education expert who served in Tony Blair’s government, former U.S Secretary of Education Margaret Spellings, and Washington Post editorial writer Charles Lane came to CFR this week to discuss education and U.S. competitiveness. As today’s "Above the Fold" suggests, how we spend our education dollars will have long-term implications for our economic power and global influence. To learn more, you can listen to the audio or watch the video.

Read of the Week. The White House is thinking a lot about East Asia this week. But it still has lots of problems to deal with elsewhere in Asia. Iran refuses to come clean on its nuclear weapons activities, and military successes continue to outpace political successes in Afghanistan. But the White House may face an even bigger challenge with Pakistan. Jeffery Goldberg and Marc Ambinder discuss how a toxic brew of political instability, radical jihadis, and a growing nuclear arsenal makes Pakistan “the ally from Hell.”

Blog Post of the Week. The Atlantic’s Max Fisher sees five critical lessons in President Obama’s announcement this week that the United States plans to build a Marine base in the northern Australian city of Darwin. One lesson is that the United States is shifting its attention from the Middle East to East Asia. You certainly would not get that impression from watching the GOP presidential debates.

Poll Question of the Week. In anticipation of President Obama’s trip to Asia, CBS News asked Americans whether they “consider China an ally of the United States, friendly but not an ally, unfriendly, or an enemy of the United States?” A near majority (48 percent) said “friendly,” and only a combined 32 percent said “unfriendly” (20 percent) or “enemy” (12 percent). When it comes to economics, though, Americans take a decidedly darker view of China—61 percent say that “the recent economic expansion of China has generally been “bad for the U.S. economy.”

Chart of the Week. Just how good are American universities? Well, according to U.S. News & World Report, thirty-one of the world’s one hundred greatest universities are in the United States. (The USNWR rankings are based on the QS World University Rankings.) No other country comes close. (The Times Higher Education rankings show the same pattern. As a proud graduate of the University of Michigan, I prefer the USNWR rankings because they rank UM higher (#14) than Berkeley (#21) or any other U.S. public research university.) As they say on the playground, American universities have got game. 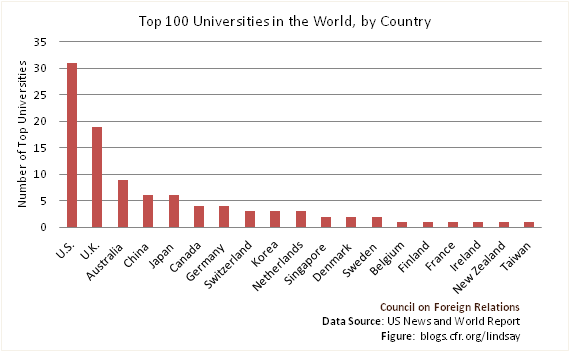 Too Good Not to Note. Robert Danin (Berkeley class of 1983) worries that Syria’s conflict has entered a more dangerous phase. Walter Russell Mead asks if Belgium is the future of Europe. Joe Nye sees signs that Japan is reviving. Marc Ambinder considers the nightmare scenario for Democrats in current deficit reduction talks: the super committee fails to reach an agreement and Republicans succeed in repealing the defense sequester. Nicholas Thompson argues that Henry Kissinger and George Kennan were much closer than contemporary analysts thought. Chris Preble wants to cut defense but not without first rethinking the strategic goals of American foreign policy. Spencer Ackerman says that the defense cuts won’t cause nearly as much harm as commonly alleged. Ezra Klein thinks that defusing the sequestration trigger might prove harder than people think. If you want to learn about so-called non-defense discretionary spending and the kinds of challenges facing the super committee, try this interactive graph.

Perils of Prediction. "There is not the slightest indication that nuclear energy will ever be obtainable. It would mean that the atom would have to be shattered at will."  Albert Einstein, 1932. Hey, you can’t get ‘em all right.

Quote to Ponder. “One cannot think well, love well, sleep well, if one has not dined well.” Virginia Woolf, A Room of One’s Own.

A Reason to Smile. Turkey, mashed potatoes, cranberry sauce, and pumpkin pie. Happy Thanksgiving! The Friday File is off next week in honor of the holiday.