Above the Fold. The super committee now has a bit more than a month to strike a long-term deficit reduction deal. I’m skeptical about the prospects for a deal—I’d put the odds at one-in-four—for reasons discussed here and here. But long shots sometimes pay off. What happens then? Much depends on the deal’s terms and which super-committee members support it. (A simple majority moves any deal to an up-or-down vote in Congress.) If the deal relies solely on spending cuts, or if, say, the three House GOP super-committee members all vote against it, the outcome is pre-ordained. In the first instance, the deal will pass with lots of Democrats grumbling. In the second, the deal is dead on arrival in the House (which is why this scenario won’t materialize). If the deal combines spending cuts and tax increases and it has some House support, however, the politics get interesting. House Republicans would be the most likely to balk at such a deal. As the debt ceiling fiasco showed, they hate tax hikes. Even if the Standard & Poor’s downgrade has them wavering in that determination, the reactions of the GOP’s presidential candidates could stiffen their resolve. Remember the August debate in Ames, Iowa when all the candidates raised their hands to pledge that they would not agree to hike taxes by $1 even if it meant $10 in spending cuts? Endorsing a spending-cuts-plus-tax-hikes deal means abandoning that vow. Would any candidate risk being accused of flip-flopping just six weeks ahead of the critical Iowa caucuses? Probably not. So here’s some unsolicited advice for the super committee: should a deal begin coming together, start thinking about how to keep the dynamics of the GOP presidential race from blowing it up.

CFR Event of the Week. Amidst a news-filled week, Senator Carl Levin (D-MI), chair of the Senate Armed Services Committee, still found time to stop by CFR today.  He talked about Iraq, Afghanistan, and Libya among other topics. You can watch the video here. Senator Levin also graciously sat down with me for five minutes to discuss Muammar al-Qaddafi’s death, Afghanistan’s future, and the possible defense spending cuts:

Read of the Week. Americans like to talk about foreign policy in black and white terms. But it’s more often about shades of grey. Nowhere is this truer than in Afghanistan. What candidate Barack Obama (and many others) portrayed as the “good war” has proved to be a source of frustration. The reason, Luke Mogelson reports in the New York Times Sunday Magazine, is because it is about bad guys versus worse guys.

Blog Post of the Week. My colleague Liz Economy, who is an accomplished China hand, was in India last week with a CFR delegation. She reports on what she heard from the Indian strategists she spoke with, namely, that Beijing is not trustworthy, neither is Washington, and so Delhi will need to find its own way forward. Some fascinating grist for all those conversations about how India and the United States are natural partners.

Poll Question of the Week. The “Occupy Wall Street” movement contends that Wall Street caused the country’s current economic mess. Does the broader American public agree? Well, Gallup asked Americans who they blame in a recent poll. It turns out that the public is more than twice as likely to blame the federal government (64 percent) as Wall Street (30 percent). Not surprisingly, the vast majority of Republicans (82 percent) blame the federal government. Democrats are nearly evenly split, with 49 percent blaming the government and 46 percent Wall Street. So the political heat is not off Washington quite yet.

Chart of the Week. The “Occupy Wall Street” movement has shifted the spotlight, at least for the moment, to the question of income inequality. So how much has it grown in recent years? In terms of the share of pre-tax income that goes to the top one percent of all households, the answer is quite a lot. America’s best paid households take home more than one-fifth of all pre-tax income, which is near historical highs over the past century and more than twice the share of three decades ago. 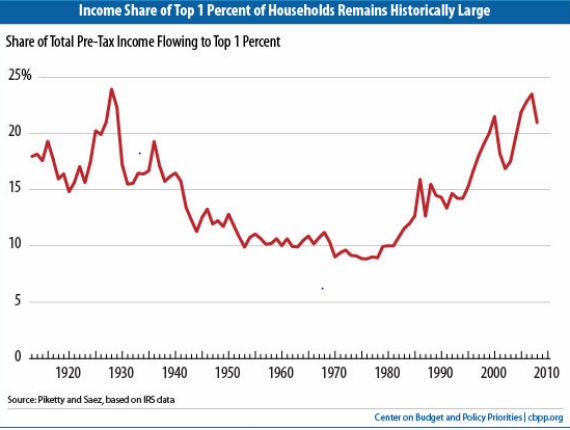 Too Good Not to Note. Robert Danin, Richard Haass, Ed Husain, Ray Takeyh and Micah Zenko all weigh in on the consequences of Qaddafi’s death. Spencer Ackerman provides the skinny on the U.S. drone war in Libya. Fred Kaplan thinks that Obama is changing the way America wages war. David Rothkopf thinks that Qaddafi’s death heralds a new Obama doctrine; he also thinks that the GOP debate in Las Vegas ushers in the concept of “dumb power.” Josh Gerstein thinks that Qaddafi’s death blunts Republican criticisms of how Obama handles foreign policy. Even if it doesn’t, David Remnick doesn’t like the way the GOP candidates are talking about Obama’s foreign policy record. Brad Plumer reports that a Berkeley physicist and self-proclaimed climate change skeptic ran a major research project that ended up confirming the basic finding that the globe is getting warmer. Chris Cillizza asks whether Qaddafi’s death will help President Obama in 2012. Matt Bai wonders whether anyone has a grip on the GOP.

Perils of Prediction. "The concept is interesting and well-formed, but in order to earn better than a ’C’, the idea must be feasible." A Yale University management professor in response to a paper by Fred Smith proposing reliable overnight delivery service. As they say, those who can, do; those who can’t, teach; those who can’t teach become management professors. Smith went on to found FedEx, which revolutionized overnight delivery in the United States and around the world.

A Reason to Smile. The Kancamagus Highway in October.