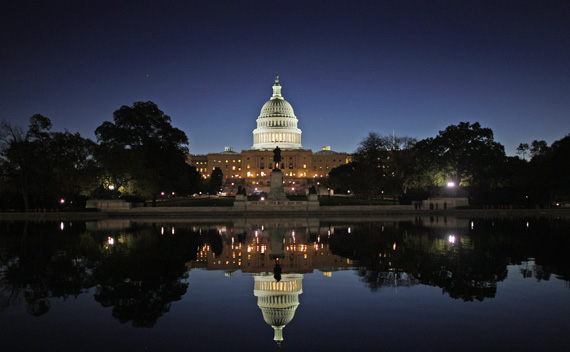 Above the Fold. I wrote two weeks ago that nothing would come of congressional efforts to reverse President Obama on Libya. Lo and behold, lawmakers have given speeches, pounded tables, and held votes. The sum total of all this activity is that Congress has let the White House have its way. True, the House did refuse last week to vote to authorize the Libya mission, a step that numerous media outlets called a “historic rejection.” It was, at least in the same way that the 1847 House vote denouncing the Mexican-American War for being “unnecessarily and unconstitutionally begun” was a rebuke of President Polk. Both votes go into the history books, but neither changed anything. This week the Senate Foreign Relations Committee formally repudiated the legal arguments that the White House has used to defend its position on Libya. The committee then voted 14-5 to authorize President Obama to continue current military operations. Readers who like to see the glass half full can say that Congress at least tried to assert its war powers authority and that it failed for all understandable reasons: disagreement on the merits of the president’s policy; a fear of the consequences for U.S. credibility abroad in saying no to the White House; and plain partisan politics. The downside to Congress’s failure either to authorize the Libya mission or forbid it is that claims that the president possesses an independent war-making authority just got a little stronger. President Obama says today that the Libyan operation doesn’t rise to the level of “hostilities” or set a precedent. But you can bet that his successors will argue tomorrow that it is a powerful precedent that enables them to act as they see fit. Such is the way that constitutional authorities get redefined and reshaped.

CFR Event of the Week. GOP presidential candidate Tim Pawlenty stopped by CFR this week to talk about his views on national security and foreign policy. His theme? “Now is not the time to retreat from freedom’s rise.” If like me you missed the event—I was in Dublin, Ireland for a conference—you can watch the video, listen to the audio, or read the transcript.

Read of the Week. If you haven’t done so already, you should read Sebastian Mallaby’s, More Money Than God: Hedge Funds and the Making of a New Elite. This is not just a shameless plug for a CFR colleague and one of the most gifted conversationalists I know. More Money Than God just won the Gerald Loeb Award for best business book. This is a very big deal. The Loeb Award is the Pulitzer for financial journalism. And More Money Than God is a terrific read.

Blog Post of the Week. The boom in so-called shale gas is remaking the energy landscape. So much so, that my colleague Mike Levi is asking whether the United States should export natural gas. For those of you who don’t spend your days poring over the latest issue of American Oil & Gas Reporter, geologists have long known that shale deposits can contain vast amounts of natural gas. The problem was how to extract the gas at a price that could earn a profit. Enter “fracking,” the shorthand term for “hydraulic fracturing.” It’s a technique that injects a mix of water and chemicals deep into shale deposits, thereby fracturing them and releasing the trapped natural gas. The United States has several large shale gas deposits that are now being exploited. The question that Mike and others are grappling with is how to best make use of this resource. (And yes, fracking does come with some potentially dire side effects.)

Poll Question of the Week. Gallup finds that by a margin of four-to-one, Americans support President Obama’s troop withdrawal plan for Afghanistan—72 percent give it a thumbs up and only 23 percent a thumbs down. People who identify as Democrats are most supportive (87 percent), and Republicans the least (50 percent). On the specific question of the speed of the withdrawal, 30 percent of Americans agree with Obama’s timetable, 33 percent want to remove troops more rapidly, and 31 percent say there should be no timetable. So in all, critics who are calling for the White House to stay the course in Afghanistan don’t have the public on their side.

Chart of the Week. The emission of carbon dioxide is the main driver behind anthropogenic (i.e., human-induced) climate change. How does the United States compare to the so-called BRICS—Brazil, Russia, India, China, and South Africa—when it comes to generating carbon dioxide? As the chart below shows, the United States produces more carbon dioxide by burning oil and natural gas than anyone else. China leads the way when it comes to burning coal. Indeed, coal accounts for about 70 percent of China’s total energy consumption. This is significant because for each unit of energy coal emits 80 percent more carbon dioxide than natural gas, and 20 percent more than oil. Burning coal also produces other “negative externalities,” as economists like to say, such as acid rain and air pollution. The World Health Organization reports that only 1 percent of China’s urban population breathes clean air. 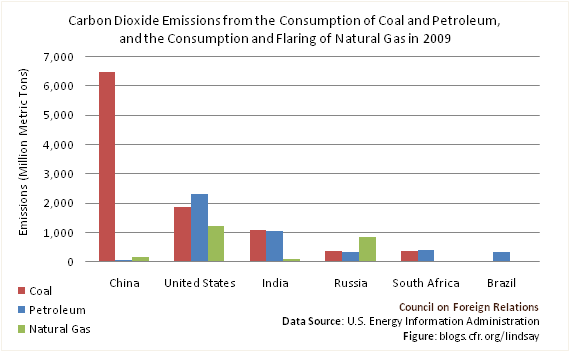 Too Good Not to Note. Harold Koh, Louis Fisher, and Peter Spiro all testified this week before the Senate Foreign Relations Committee on the merits of President Obama’s legal claims on Libya. Marty Lederman looks at the Libya war powers legislation that the Senate Foreign Relations Committee approved earlier this week. Nate Silver parses the latest GOP presidential poll results in Iowa and explains why the news isn’t as bad as it seems for Tim Pawlenty.

Perils of Prediction. “I have not the smallest doubt that…once vigorous measures appear to be the only means left of bringing the Americans to a due submission to the mother country, the Colonies will submit.” King George III of England, Letter to Lord North, February 15, 1775. Wrong. Happy Birthday, America!

Quote to Ponder. America “is the well-wisher to the freedom and independence of all. She is the champion and vindicator only of her own. She will commend the general cause by the countenance of her voice, and the benignant sympathy of her example. She well knows that by once enlisting under other banners than her own, were they even the banners of foreign independence, she would involve herself beyond the power of extrication, in all the wars of interest and intrigue, of individual avarice, envy, and ambition, which assume the colors and usurp the standard of freedom. The fundamental maxims of her policy would insensibly change from liberty to force.... She might become the dictatress of the world. She would be no longer the ruler of her own spirit.” John Quincy Adams, July 4, 1821.

A Reason to Smile. Fireworks.

The World Next Week:Thailand Votes While Venezuela Wonders

The Future of AI, Ethics, and Defense