It is hard to put lipstick on a pig.

China’s November trade data (a 2.2% year over year fall in exports; a 17.9% year over year fall in imports -- see Andrew Batson of the Wall Street Journal) suggests that global trade is contracting quite rapidly. And since trade accounts for a rising share of global activity, it suggests that the global economy has stalled -- and perhaps is contracting. 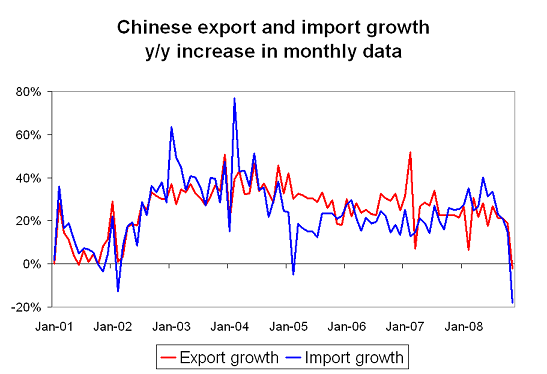 The November data from Korea and Taiwan tells a similar story. All experienced far larger falls in year over year falls in their exports than China did.

Sometimes the y/y change for China paints a misleading picture -- as the timing of China’s New Year can have a big impact on the data. Not in this case. The 3 month moving average is heading down too -- and it almost certainly has further to fall. 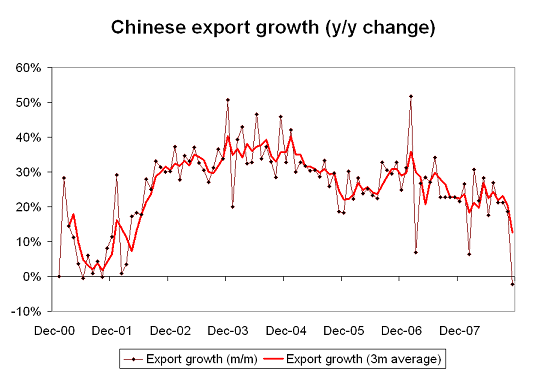 Up until now the widely reported difficulties in China’s traditional, labor-intensive export sectors (textiles, shoes) have been offset by strength in China’s more capital-intensive export sectors (electronics, machinery). See the World Bank Quarterly. But not anymore. November’s exports plunged well below China’s trend growth (using a linear trend, with monthly exports running roughly $20b over their level the previous year ... ). 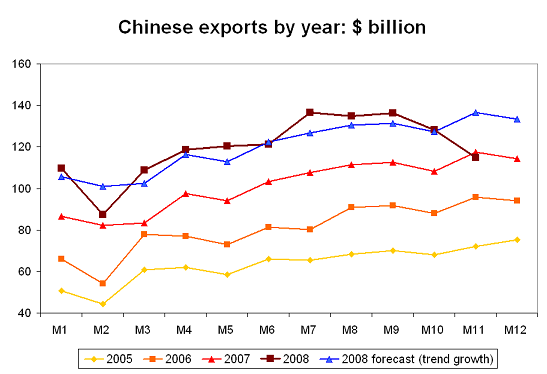 There isn’t much of a case for China to allow the yuan to depreciate against the dollar to help exports though. Not when Chinese exports are falling less than other countries exports, and China is gaining global market share. These are going to be hard times for everyone.

And China -- with its large external surplus and strong fiscal position -- should have more room to stimulate domestic demand than most. It certainly needs to do so.

China’s imports fell significantly faster than its exports in November, pushing China’s monthly trade surplus up to a record $40 billion. That is a lot of cash. Let’s see how large the US deficit is in November -- it might not be all that much larger than China’s surplus.

China’s 2008 trade surplus looks set to exceed China’s 2007 trade surplus. Given that oil is going to average close to $100 a barrel in 2008 -- more than $30 a barrel more than in 2007 -- that is rather stunning. And right now there isn’t any much reason to think that China’s trade surplus will shrink in 2009. Exports will fall. But so will imports. And the fall in commodity prices implies that the terms of trade have shifted in China’s favor.

Watch how this chart evolves over the next few months ... 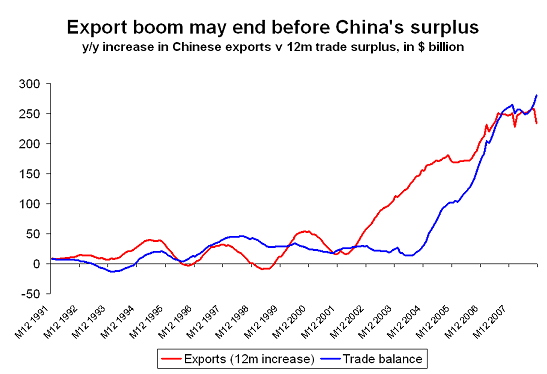 The global flow of funds right now is actually quite simple: China runs a large surplus and the US runs a fairly large deficit -- and, assuming hot money flows are (still) modest, China’s large surplus leads to rapid growth in China’s reserves and large Chinese purchases of US Treasuries. That is the dominant global flow right now -- together with the "deleveraging" of the private sector.

One last point. China has released its November data before the US has released its October data. And I rather suspect China’s export data has already established the likely trajectory for US exports. 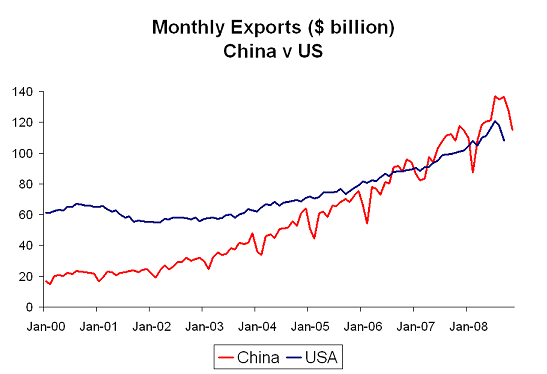 The seasonal dip in China’s exports (the data isn’t seasonally adjusted) usually comes after the US and European holidays -- not before. The US trade data for the next two months is unlikely to paint a pretty picture of the health of the US or the global economy.

UPDATE: Nice analysis from the Economist.