I haven’t written about China’s tourism imports for a while. Suffice to say they remain a puzzle.

To recap quickly, China’s reported imports of tourism soared in 2014 and 2015—with imports of tourism (spending by Chinese residents travelling abroad) rising as fast as China’s imports of commodities fell (see this blog post). China’s tourism imports are $324 billion over the last 4 quarters of data, up from $234 billion in 2014—and way up from $128 billion in 2013. The tourism deficit is now big—about $210 billion over the last 4 quarters. It is one of the main offsets to China’s large ($525 billion on a balance of payments basis) goods surplus.

Much of the rise in China’s tourism imports seems to reflects the fallout of the introduction of a new methodology for calculating tourism imports, one that relies on electronic payments data rather than the numbers on actual travelers.

And it seems to me clear that either the old methodology massively undercounted spending by Chinese tourism or the new methodology overcounts it. 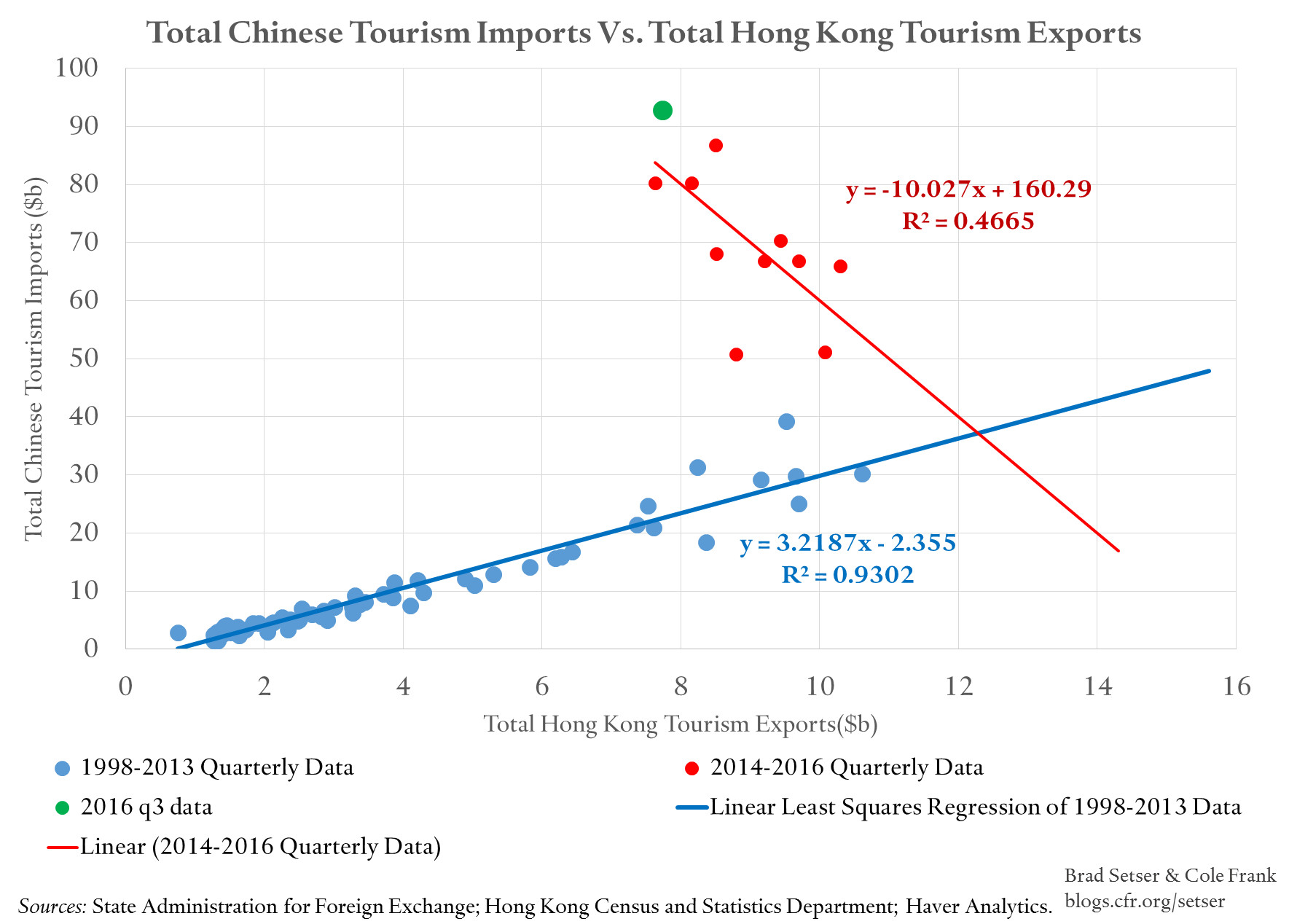 Up until the end of 2013, a rise in Hong Kong’s exports of tourism was reliably correlated with an increase in China’s imports of tourism. More or less as one would expect.

Starting in 2014—and continuing through q3 2016—the relationship changes. Completely.

A fall in Hong Kong’s exports of tourism is now correlated with an increase in China’s reported spending on tourism imports.*

Back in 2012 Hong Kong’s exports of tourism were greater than 30 percent of China’s total tourism imports.** Now they are under 10 percent. That kind of huge change serves as a red flag. Or at least it should.

There are ways of reconciling the data. Or at least trying to.

No doubt Chinese tourists are venturing further afield—so one reason for the fall in spending by tourists in Hong Kong is that Chinese vacationers are substituting trips to Thailand and other destinations for trips to Hong Kong. The “strong” Hong Kong dollar has added to the incentive to go to cheaper destinations.

But, as I emphasized in the past, Hong Kong and Macau have traditionally accounted for about half of total outward Chinese tourists, and it is hard to offset the impact of fewer visits to Hong Kong and less spending per visit in such a big market. The data on the number of travelers indicates that outbound Chinese tourism is still growing, just not at a pace that is consistent with a rise in tourism imports from around $125 billion to around $325 billion over three years (2013 to 2016).

The Hong Kong scatter plot is just another way of showing that the reported rise in China’s tourism imports doesn’t “fit” with the counterparty data.

The most likely explanation for the surge in tourism imports is that the new methodology has captured financial outflows, not just tourism spending.

So I will be curious how tighter regulation of China Union Pay (including a now denied crack down on cash withdrawals in Macau) and the like end up impacting the overall data.

The IMF’s forecast for China’s balance of payments, incidentally, projects continued large increases in tourism imports forward: growth in tourism imports mechanically pulls down China’s surplus even as slower investment weighs on goods imports. So the tourism puzzle isn’t just of academic interest; it also is relevant for assessing whether China’s currency is fairly valued or not.

*To be fair, there are very few data points since 2014 and the r-squared value is relatively low (0.47), so it is difficult to know if the correlation is negative, or if there simply is no correlation. Nevertheless, there is clearly an abrupt shift in the relationship between the two indicators.