Skip to main content
How badly were the Gulf’s sovereign funds hurt by the 2008 crisis?

It takes a bit of courage to put out a paper that is sure to get a few things wrong. But when it comes to the Gulf’s sovereign funds, the alternative to getting a few things wrong is not writing much at all. The funds cloud themselves in secrecy. Educated guesses have to substitute for analysis based on hard data.

The large Gulf sovereign funds are financed out of oil revenue, so the amount of new money they have to invest abroad is presumably linked to size of the fiscal and current account surpluses of key Gulf states. If – and it is a challenge – the path of spending and investment can be estimated, the size of that surplus will be largely a function of the price of oil. Production volume matter too, but in most circumstances production changes more slowly than price. And the Gulf funds are known to be large investors in the world’s equity markets, so their performance is likely to track, at least in broad terms, movements in major equity indexes. Sure, they have invested in “alternatives” – London real estate, private equity, hedge funds – too. But most “alternative” investments also have performed poorly over the past year.

Rachel Ziemba of RGEMonitor and I used these basic insights to built a model of the Gulf funds that allows us to estimate – very roughly – the trajectory of the various Gulf funds over the past few years. That model is only going to be as good as our assumptions – and while we made every effort to calibrate the model using available data it no doubt is going to be somewhat off. That probably isn’t the best advertisement for the Setser/ Ziemba paper on the Gulf’s large sovereign funds. But sometimes caveats are important. This is a paper with a lot of known unknowns.

Among other things, Rachel and I argue:

-- The capital losses on the Gulf’s existing portfolio overwhelmed large inflows from high oil prices in 2008. Close to $300 billion flowed into the big Gulf funds -- the Abu Dhabi Investment Authority/ Abu Dhabi Investment Council, the Kuwait Investment Authority, the Qatar Investment Authority and the Saudi Arabian Monetary Agency’s foreign assets. But the market value of their Gulf’s foreign portfolio fell by an estimated $350 billion over the course of 2008. Throw in a roughly $30b fall in the Gulf’s reserves as hot money betting on a revaluation left and the total value of the Gulf’s external assets likely went down over the course of 2008. 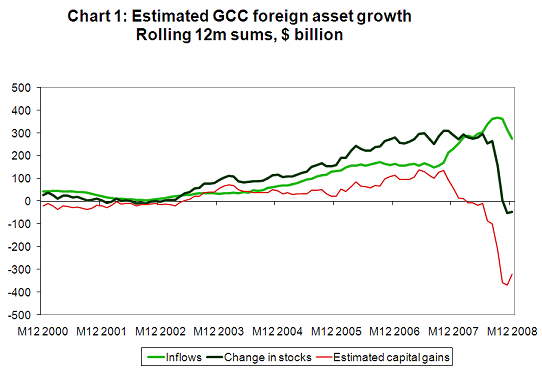 -- The Abu Dhabi Investment Authority (ADIA) was never as large as some have claimed. If ADIA ended 2000 with around $150 billion (as the Wall Street Journal reported then), we would be surprised if it ever had more than $500-$550 billion. It now has substantially less. Its large equity portfolio implies that it, not surprisingly, had a rough 2008. We estimate that the combined external portfolio of ADIA and the Abu Dhabi Investment Council, a smaller fund spun out of ADIA in 2008, was around $330 billion at the end of 2008.* Even so Abu Dhabi is fabulously wealthy -- $330 billion is a huge sum for Abu Dhabi’s small native-born population. Just perhaps not quite as fabulously wealthy as it once was.

-- The Saudi Arabian Monetary Agency now manages the largest Gulf fund. SAMA benefited from holding a more conservative portfolio than the other large Gulf funds. We assume that SAMA put about 20% of the rise in its foreign assets** into equities. Given the size of its portfolio and the size of the fall in global equities, this meant it experienced a significant loss. However, we think it had a lower share of its portfolio in equities than the other funds and thus smaller losses. And since the Saudis pump more oil than anyone else in the Gulf, they also benefited more than anyone else from high average oil prices in 2008.

-- The oil exporters should care far more about the value of their foreign portfolio when oil is worth $40 a barrel than when oil is worth $140 a barrel. At least if the oil exporter has a budget (or investment plans) that require more than $40 oil. Or if it has banks that may have trouble borrowing abroad in bad times. Some oil exporters likely were too keen to chase returns (and liquidity premiums) in the boom. That left them with a portfolio that fell when oil fell – and thus with less money than expected when they really needed the money. Any oil fund with a “stabilization” as well as an “long-term savings” function likely needs to pay more attention to its liquidity – and to holding assets that hold their value when oil falls. In the past year that was Treasuries.

On a more personal note, this paper presents the results of about three years worth of work. I first started to look into the growth in the oil exporters’ foreign assets in late 2005. It quickly became clear that not all of the oil windfall was managed by central banks – there was a notable gap between the Gulf’s current account surplus and its reserve growth. But tracking down the money wasn’t easy. The US data also didn’t provide many clues, as the Gulf’s recorded purchases of US assets were (and remain) very small relative to the Gulf’s external surplus.*** The BIS bank data didn’t help that much either. And that created a bit of a puzzle -- the Gulf’s petrodollars seemed to be disappearing from the rest of the world’s balance of payments data. And there are few things that interest me more than puzzles in the balance of payments data.****

My new paper tries to fill in some of these gaps by providing a framework for estimating the size, portfolio composition and future growth of the major Gulf funds. It builds on my earlier work on oil and global adjustment and the work of Ramin Toloui, who showed that the IMF’s balance of payments data for key Gulf countries provided the basis for estimating inflows into the large Gulf’s funds. That data though comes out with a lag, and it doesn’t tell you anything about the size of the Gulf’s existing stock of assets. Rachel and I essentially built a model to estimate inflows into various funds -- and then tied those inflows to a model portfolio. This model allows us to anchor our estimates of the Gulf fund’s current size and performance to an estimate of their past size and performance. That provides – or so we hope – the basis for a more informed discussion and debate over the past and future impact of these funds on the global economy.****

it also allows us to provide rough answers to some pressing current questions – like the size of the draw on the Gulf’s foreign assets associated with a fall in the price of oil to say $25 a barrel.

Do take a look. And let me know what you think.

*Our estimates for ADIA excludes the private assets of the Al-Nahyan family. That is true for the other funds as well. We haven’t tried to estimate the private wealth of any of the Gulf’s royal families.

*** The missing assets weren’t showing up in the banking data either.

**** It turns out, I suspect, that a large share of the Gulf’s dollar portfolio is managed by private fund managers, and generally managers based in London. Better balance of payments data from the UK would have helped to solve this mystery. But so far there is little evidence that Britain is all that interested in improving its balance of payments data.

***** The paper includes a detailed description of our underlying assumptions. If we are wrong, it will likely be because some of those assumptions are off.

Secrets of SAFE: A sharp slowdown in reserve growth and large “hot” outflows in q4….