And obviously, there is some truth to the image of US markets as a key node in the global financial system.  New York hedge funds have big positions in say Brazil, and many other emerging economies.   Goldman is making a ton of money -- and not just because their London office is doing well.

But, US doesn't really host the world's leading financial hub right now -- at least not in the sense of an airline hub where folks gather to catch a flight to their final destination.  The big hubs are in Europe.  The US is the biggest user of the world's funds -- but not the biggest intermediary.   I have made this point before, but it is laid out most elegantly in a set of charts prepared by Patrick McGuire and Nikola Tarashev in the latest BIS quarterly (See p. 9 of this .pdf/ p. 35 of the overall BIS quarterly, or look below the fold).

There are obviously a lot of different flows that show up in the BIS's analysis of global bank flows.  Flows into the US, and flows out of the US (notably to the Caribbean). 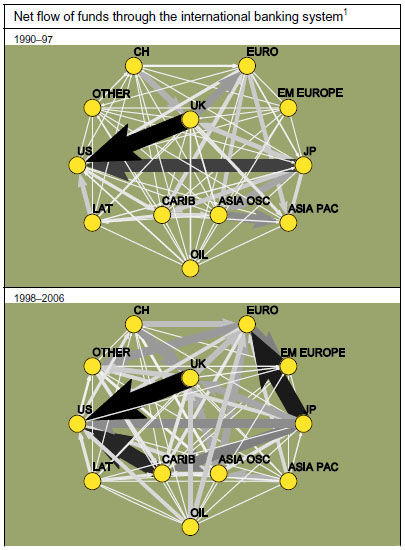 In aggregate, the US has drawn on the world's banking system rather significantly over the past few years.That isn't a real surprise.  The US has been running large current account deficits for some time now, sort of like Thailand in the mid-1990s.  And it is building up a significant net liability position to the world's banks.   See p. 10 of this .pdf/ p. 36 of the BIS quarterly:

Of course, most of the US current account deficit has been financed by selling securities to the world, not by borrowing from the (growing) offshore dollar deposits held in the world's financial centers.   I would love to be able to produce a graph that shows the overall flow of funds, not just the flow of funds through the global banking system.    Here is what I guess it would look like.

There would be a big thick line representing a big outflow from emerging Asia -- China and so on -- to the United States.   And if that line could be color coded, it would be color coded to indicate that the lion's share of that flow was coming from central banks in Asia.  The PBoC above all, but not just the PBoC.  The Reserve Bank of India has been quite active recently -- and both the Bank of Korea and the Bank of Thailand have intervened heavily.

There would be a small line going out of the US toward Latin America-- and a another slightly bigger line going the other way.   The line going out would represent US fund managers looking for high returns in local Latin Americans -- be it Brazilian real-denominated bonds, Argentine dollar denominated bonds or Argentine equities.  The line coming in would be color coded for central banks.   Both Brazil and Argentina have been building up their reserves this year.

What have I left out?   Japan, and the Middle East.   They are the mysteries.

We know that there would be a thick line heading out of Japan that would break off into three of four branches.  One branch would head to Australia and New Zealand -- a favorite carry trade.  One would head off toward Europe -- another carry trade.  One would go into China and the rest of emerging Asia -- think Japanese direct investment.  And one would head toward the US -- with perhaps an intermediate stop in the Caribbean.  There would also be partially offsetting inflows into Japanese equities from the US and outflows from private Japanese institutions toward foreign equity markets.

"In a recent note to clients, Goldman Sachs said the size of the carry trade outstanding involving yen is "substantial" and could account for a large chunk of the country's balance of payments surplus, which is 4-5% of gross dometsic product."

The BIS data on Japan suggests that banking outflows from Japan from 1998-2006 (see p. 9) have gone overwhelming to Europe, and specifically the Eurozone -- which is a bit surprising, since Europe hasn't run big current account deficits that need financing.   Those inflows have to be offset by outflows.  Then again, the banking data doesn't capture all that much of Japan's cumulative current account surplus.

And then there is the Middle East, including North Africa.  There would be a large thick line heading out of the Middle East.   It would be color coded in a way that recognizes that it is coming from a mix of central banks and government investment funds. A tiny thin line (but a much talked about line) would head toward Asia.    A somewhat smaller line would head directly to the US.  And a really big thick line would head toward Europe.    But as with Russia, some of that outward flow would be in euros and pounds, and some of it would be in dollars.   And the flow in dollars, after making an intermediate stop in Europe and the Caribbean, would ultimately flow to the US.

That is more or less how the world has to work -- there are a fewer additional smaller flows out there.  A flow from Norway to the UK, the Eurozone and the US.  A flow from the Eurozone (and private investors in the US) to Eastern Europe and Turkey and so on.   But those are the big flows.

And where is the hub -- the node with the biggest inflows and outflows that intermediates it all?  Easy.  Europe.  London specifically.

The biggest uncertainty?  Easy as well.  What fraction of the outflow from the Gulf and Russia into European financial centers takes the form of offshore dollars, and fraction is in euros and pounds?  I pay pretty close attention to these flows, and I am not sure.   I can guess, but I don't really know.

Why does the answer to that question matter?   If most of the outflow from the oil exporters is in the form of euros and pounds, European private investors are effectively borrowing in euros and pounds from Russia and the Gulf to invest in dollars in the US.  If it is in dollars, they are effectively borrowing from the same set of folks, but not taking on any currency risk -- they borrow in dollars from the oil exporters to invest in higher-yielding dollar securities ...

That at least is how I see the world working.

Trade deficit seems to have stabilized, at least if oil stays at its current levels