But their current impact on financial markets is easily (and often) over-stated. The overwhelming majority of the enormous increase in government foreign assets still comes from the growth in central bank reserves. The majority of central banks’ foreign assets are still invested in Treasury and Agency securities. The shift to a world where sovereign investors primarily buy equities has yet to happen. 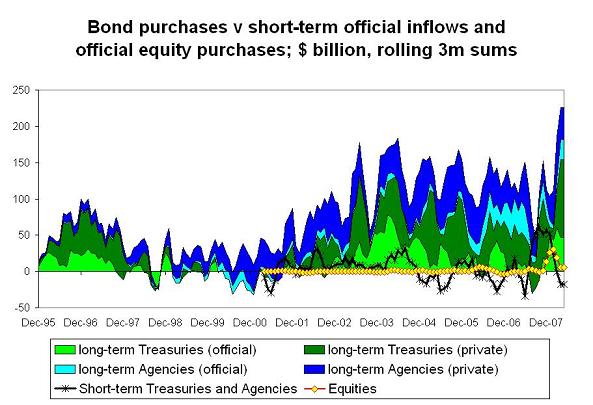 Immediately after the August crisis central banks piled into short-term Treasuries and Agencies. In December and January, some well-established funds -- together with the CIC -- famously bought some equity in US banks, generating the upward blip in official purchases of equities. But those investments haven’t worked out so well. Now central banks are back to buying enormous sums of Treasuries and Agencies.

Here is is important to remember that the TIC data understates official purchases of Treasuries and Agencies and purchases by emerging economies. Remember all those London purchases? The pattern of revisions to foreign holdings of Treasuries suggests after the US survey data is released suggests that a large share of China’s purchases, not just the Gulf’s purchases, comes through London.

Indeed, I would argue that central bank purchases are likely to be closer to total foreign purchases of Treasuries and Agencies than recorded official purchases. I actually am not going out on much of a limb here. The US Treasury agrees with me. Read the fine print of the latest survey. The Treasury writes (p. 14):

I suspect Francis Warnock would agree with me here as well. He has occasionally used total Treasury purchases in the TIC data as a proxy for official inflows. And anyone who reads John Jansen’s ongoing bond market commentary will quickly learn that central banks are a big player in the market.

Why does this matter?

1) The central flow of the global economy -- and dominant means of financing the US external deficit -- continues to be the sale of US Treasury and Agency bonds to foreign central banks. Recorded official purchases of Treasuries are nearly as high as they were in early 2004 -- when Japan’s huge purchases were a big story. Total foreign purchases of Treasuries -- which are likely to be a more accurate measure of true central bank demand -- over the past three months reached $150 billion. That is higher than the 2004 peak. Total foreign purchases of Treasuries and Agencies over the last 3ms easily topped $200 billion. That is enough to cover the entire US current account deficit.

2) They raise questions about arguments that based on a hypothesized shift by governments from liquid cash-like assets toward less-liquid, less-cash like investments.

Guillermo Calvo, for example, has argued that a shift by foreign central banks out of cash put upward pressure on US interest rates that the Fed resisted to reach its own policy target, and thus contributed to expansionary monetary policy and the rise in commodity prices. Krugman isn’t convinced. Nor am I, but for different reasons.

A shift by sovereign funds away from short-term bills is a central part of Calvo’s argument (at least as I understand it), as "low and momentarily pegged central bank interest rates imply that the fall in the demand for Treasury Bills results in an expansion of the money supply." But the available data suggests a shift into bills by central banks last fall -- not a shift out of bills. Commodity prices were rising then too. And to the extent that demand for bills is now falling, it is because central banks are buying slightly longer-term Treasuries.

Moreover, my sense is that there was a strong shift into safe bills by money market funds; that -- I suspect -- is why the Fed has both been able to lower rates without expanding its balance sheet much. The Fed has actually been a large net seller of bills as it tries to meet private demand for safe assets. Its holdings of bills are down $255 billion since last June.

That feels like 2003 and 2004. Central banks are basically financing the expansion the fiscal deficit.