Over the last year, U.S. import growth stalled. Capital goods imports did nothing—in part because of weakness in non-residential investment. And consumer goods imports were flat. 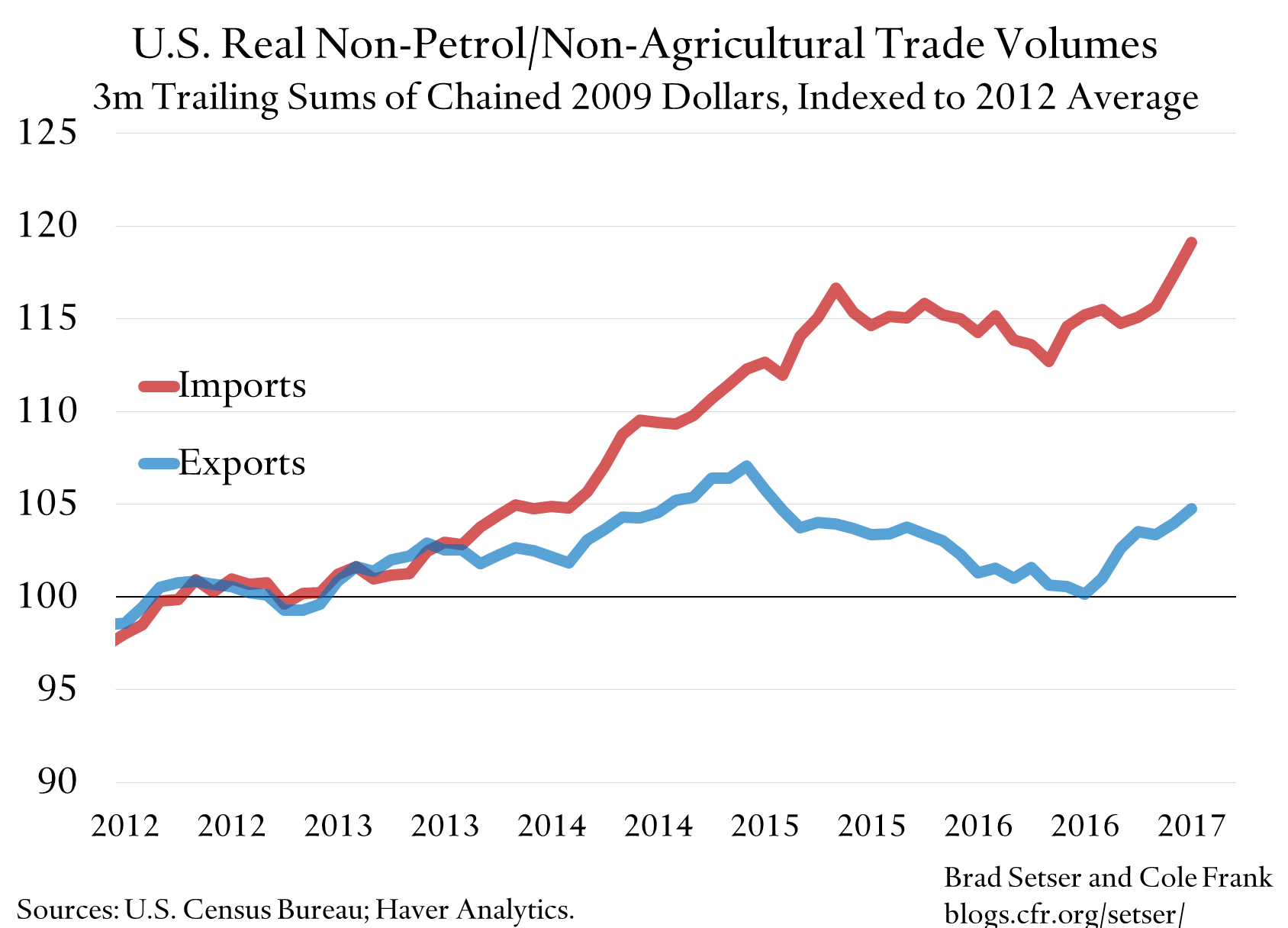 To be sure, the January trade data can be a bit funky. As Bill McBride of Calculated Risk notes, the timing of China’s lunar new year plays havoc on the United States’ own seasonal adjustment. But the ISM import index suggests February won’t be much different.

Of course, there are different ways to interpret the recent strength in imports.

Or it can mean that more of a given amount of demand growth is bleeding out to the benefit of the rest of the world, leaving the “home” economy short demand -- slowing the economy (U.S. from 2001 to 2004?).

In practice it is often a bit of both. See Neil Irwin.

In 2016 the U.S. benefited from the fact that imports were a bit lower than would be expected based on the overall performance of the U.S. economy. U.S. demand growth was a bit weaker than expected, and imports were even weaker than implied by the overall evolution of U.S. demand (in part because of changes in inventories). Import growth picked up in q4 2016—and looks to have remained strong in q1.

Exports have been more of a mixed bag. They are bit stronger than they were in most of 2016, but still not all that strong. Core manufactured exports were up 4 percent year over year in January (agricultural export volumes were way up versus last January, but that may not be sustained through the full year). The export sub-component of the ISM survey does suggest that this pick up in export growth should be sustained.

Sum it up and the real non-petrol deficit in January was about 30 basis points of GDP larger than its 2016 average. It is trending up. Cole Frank and I also took out agricultural exports, for soybean-surge related reasons. 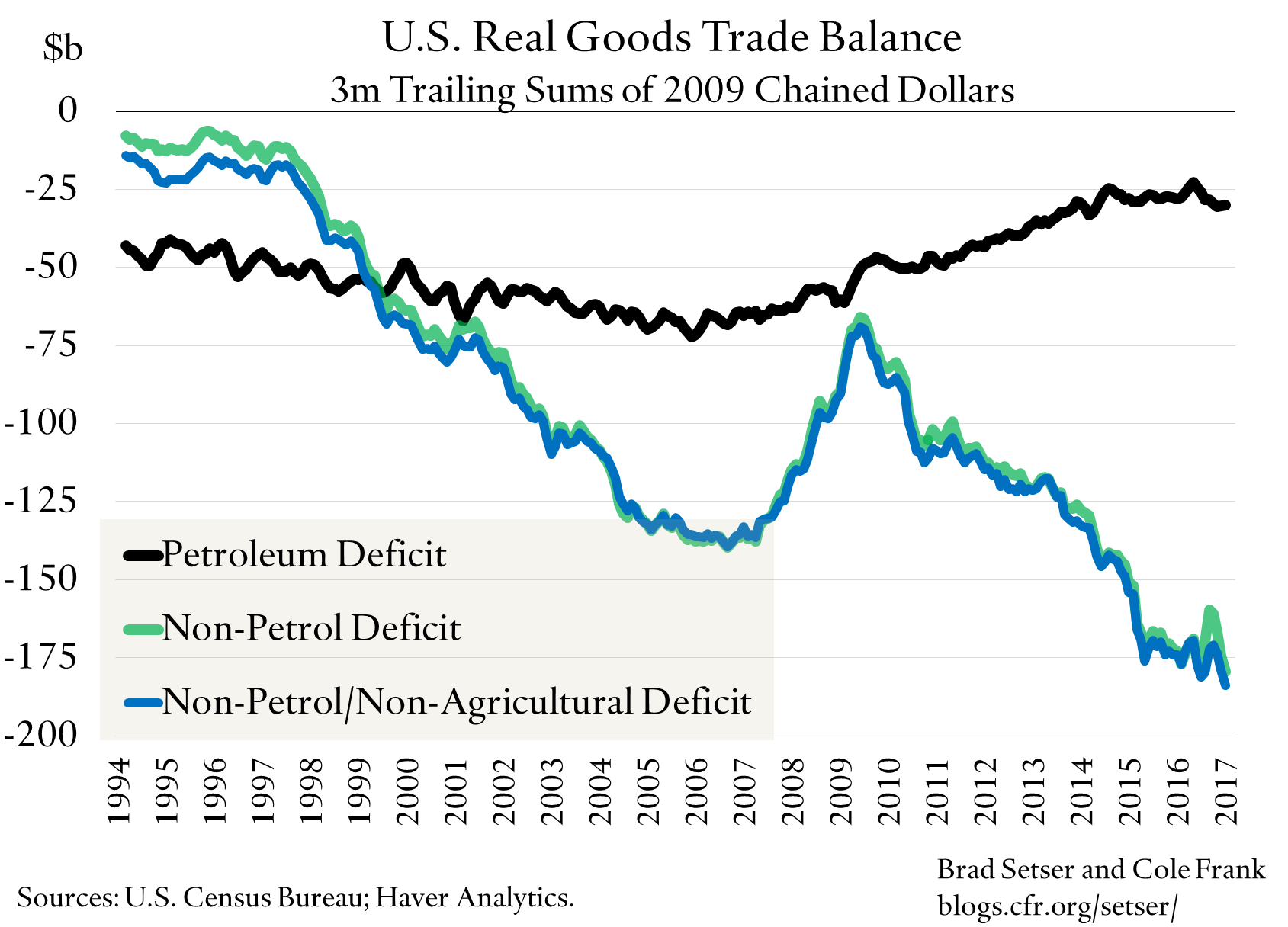 This shouldn’t be a surprise. Bill Cline of the Peterson Institute has forecast that at current levels of the dollar, a further deterioration in the trade balance is very much to be expected (see Figure A-3). In fact, the Fed was anticipating more of a drag from imports than actually materialized in 2016—and it looks like some of that drag will now show up in 2017.

By the way, U.S. imports from China were up 11 percent in January in nominal terms, and with prices down over 1.5 percent year over year, even more in real terms. Chinese real export volumes were up 11 percent in January, according to the official Chinese data. Chinese monthly data in q1 is notoriously tricky to interpret —and the Chinese export volumes series recently has been very volatile. But it does seem like Chinese export volume growth has picked up. There isn’t an obvious new year effect—January 2017 seems to have had fewer working days than January 2016, though there could be a bounce back effect from a weak December (Chinese export volumes were weak in October, strong in November, weak in December and then strong in January). The Chinese February trade data is --as is often the case -- confusing, but it suggests ongoing growth in export volumes (together with a more puzzling surge in imports).

One last note: net petrol import volumes in January are about equal to their q4 levels, and higher than the 2016 average. That said, U.S. tight oil production is now growing rapidly, and at current prices the EIA now expects significant volume growth out of the United States. As a consequence, I no longer expect the real petrol deficit to rise in 2017—I am among those who have been surprised by the strength of the oil-producing sector of the U.S. economy at $50 a barrel oil.