Russia’s central bank has indicated that it has cut its holdings of Fannie and Freddie debt by about half since the beginning of the year. Russia’s central bank claims its $100 billion portfolio has been pared down to $50 billion. Russia presumably also holds Ginnie Mae and other “Agency” bonds that have an explicit government guarantee – the US data suggest that Russia’s holdings of Agencies are higher than its reported holdings of Fannie and Freddie debt.

So much for the notion that all sovereign investors are always long-term investors, willing to hold difficult positions through thick and thin. Russia likely concluded that the political cost of holding Fannie and Freddie paper isn’t worth the extra yield. Russia’s net sales likely put at least some pressure on Agency spreads.

That raises something that I have been meaning to write about for a while now – the tendency to accept uncritically the argument that official investors (notably sovereign funds) have played a stabilizing role in the subprime crisis. To be sure, Merrill, Morgan Stanley, Citi, UBS and Barclays would be in more trouble now if not for the capital they raised from sovereign funds. The sale of convertibles and common stock to sovereign funds (and in the case of UBS, a large “private” investor in the Gulf) in December and January has proved to be a good deal for the banks and a bad deal for the sovereign funds. But it is still, I suspect, a stretch to conclude from these investments that official investors have played a stabilizing role in the crisis, for three reasons.

-- The available evidence suggests a flight away from credit risk by some sovereign investors, which added to distress in parts of the market.

Let’s cover each point in turn.

First, the roughly $50 billion that sovereign investors have invested in banks needing to be recapitalized (here I am setting aside investments made prior to the credit crunch, and ICBC’s purchase of a stake of South Africa’s Standard Bank) represents around 3% of the over $1.5 trillion (or more) in new funds that central banks and sovereign funds have been asked to invest over the last year. The $1.5 trillion number is my estimate, but it is based on real numbers: the IMF’s COFER data, the increase in SAMA’s non-reserve assets, reported inflows into Norway’s government fund and estimated inflows into the big Gulf funds and the estimated increase in the assets of Chinese state banks and the CIC. $50 billion represents an even smaller share of the total stock of sovereign investments.

This point applies with particular force to China. The $5 billion the CIC invested in Morgan Stanley represents less than 1% of the likely increase in the foreign assets of the government of China once all the funds that have shifted to the state banks are added in.

That leads to my second point – namely, central banks and sovereign funds haven’t provided enough information to evaluate their overall impact on the market.

In the first quarter – and I suspect the second quarter as well, though the IMF data won’t be released for a while – emerging market central banks that do not report even basic data about the currency composition of their reserves accounted for almost two times as much global reserve growth as emerging market central banks that do report data to the IMF ($225 billion or so v $112 billion). Industrial country central banks – who do disclose the currency composition of their reserves – added another $30 billion. But China’s state banks, who also don’t disclose much, accounted for another $15b in the first quarter. Sovereign funds -- on the assumption that about $75 billion was shifted to the CIC and the oil funds chipped in another $50 billion – accounted for another $100 to $125 billion. Sum it all up and the IMF had data on the currency composition of about 1/3 of the $450-500b in sovereign flows in the first quarter.

The IMF has no information of the bond/ equity split of the reserves of even reporting central banks – and no information to determine whether sovereign investors have been taking on credit market risk or shedding credit market risk. Central banks don’t report that kind of data as part of the COFER process, and there is no analogue to the “COFER” data for the foreign assets of sovereign funds.

This makes me suspicious of arguments that sovereign funds have been a stabilizing force in the market. Unless the IMF has access to additional information that allows them to see how the portfolios of sovereign funds have evolved over the past year, I would think the IMF should be arguing that sovereign investors have not disclosed enough information about the broad contours of their portfolio to allow the IMF to make an informed judgment about their overall market impact. They may be stabilizing. They may not. Absent a bit more disclosure, it is impossible to know.

I don’t think sovereign funds can have it both ways: if they want to argue that they are a stabilizing force in the market, they need to disclose enough information for outside observers to be able to verify their claims. Ted Truman has this right. He writes:

it is elitist to argue that SWFs should be judged by their past investment track records as privately evaluated, for example, by so-called market professionals. The current IMF-facilitated effort to increase the accountability of SWFs via increasing their transparency should be directed at establishing track records for the inspection by the citizens of the countries with the funds and the citizens of the countries in which they invest.

Absent more disclosure and a public track record, it is impossible to know exactly how sovereign investors are influencing markets. But the available evidence suggests a flight away from credit market risk, not a flight toward credit market risk. That is my third point.

We know that demand for corporate debt from “sovereign wealth fund and central bank” hubs like London has plummeted. That likely reflects the unwinding of SIVs and conduits, not a big fall in sovereign demand. But it is also indirect evidence that sovereigns haven’t been buying what the financial institutions now need to sell. We know that if you sum up private purchases of Treasuries and Agencies are added to recorded official purchases to produce a proxy for "true" central bank purchases, central banks have purchased something like $525 billion of Treasuries and Agencies over the past year (and another $50b of short-term debt). We know that there has been a very strong increase in FRBNY’s custodial holdings.

We also know a few other things.

-- India has shifted its deposits out of commercial banks and into the BIS and other central banks. This suggest a flight away from credit market risk, not a flight toward risk on the part of one major sovereign investor.

-- Russia has – as noted above – shifted away from the Freddie and Fannie and towards Treasuries and perhaps Agencies with an explicit “full faith and credit” guarantee from the US government. Again, at the margin, this is a shift away from credit market risk.

-- China’s state banks – who could be the fifth largest source of sovereign investment in the world, trailing only China’s SAFE, the Bank of Japan, the Bank of Russia and the combined portfolio of Abu Dhabi’s proliferating sovereign funds – have reduced their exposure to US credit market risk.

The US balance of payments data for China – released on quarterly basis – also shows a fall in “private” Chinese purchases of US securities. Chinese investors have gone from purchases (on a rolling four quarter basis) of around $20 billion to net sales (in the four quarters through q1) of around $15 billion …. 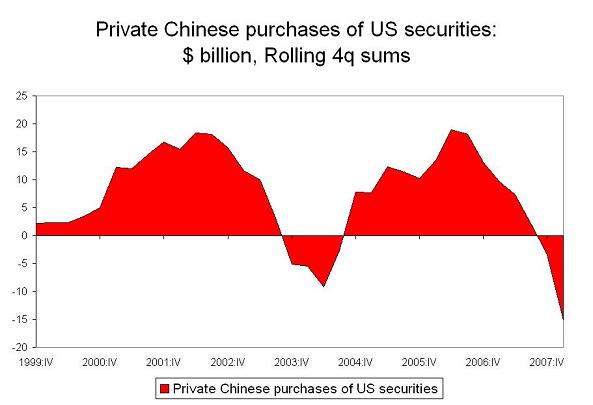 To be clear, these sales are dwarfed by recorded official Chinese purchases. Moreover, the recent US data understates China’s purchases (it will be revised up soon to reflect the last survey results, and then it will be revised up more in a year to reflect the June 2008 survey). My guess is that – given the scale of China’s foreign asset growth – China’s true purchases of US assets are in the $400-500 billion range – or about twice what the US balance of payments data now shows. 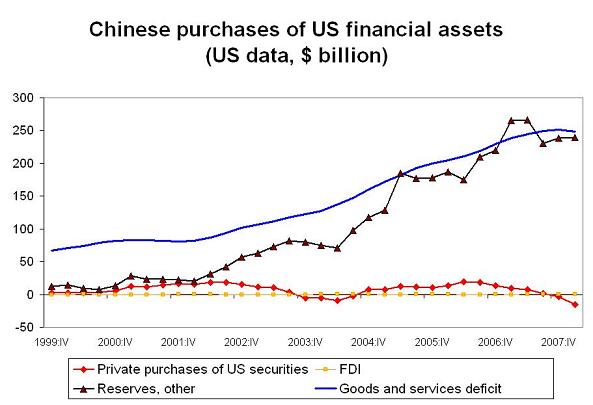 You can argue that the state banks are banks, not sovereign investors. But that argument seems thin to me. The banks are owned by the CIC after all (which makes it hard for me to take the CIC’s claims that it doesn’t take controlling stakes seriously; at best that argument only applies to their external investments). And they are managing funds placed with them by the CIC and the central bank, whether through the use of fx as part of their recapitalization, swaps with the central bank or the foreign exchange that they are now likely holding as part of their reserve requirement.

Moreover, I wouldn’t be surprised if some other sovereign investors who previously had been dabbling in credit risk also have pulled back.

The overall story is one where sovereign investors – who now control big bucks – have piled into safe debt and safe assets while shying away from riskier assets. That has kept real rates on Treasuries very low. But it also has contributed to wider credit spreads – and thus a fairly high cost of borrowing for many actors in the US.

I would postulate that if full information was available about the activities of the official sector, the mostly likely conclusions to emerge would be that sovereign investors:

-- Helped to stabilize the banks’ capital position, though perhaps they also contributed to a sense among the banks that they didn’t need to take decisive action to clean up their balance sheets.

-- Helped to keep long-term Treasury rates stable, and quite low, given the rise in inflation. The fiscal deficits of the Bush Presidency have been financed almost entirely by the world’s central banks.

-- Added to instability in the credit markets – and thus hurt the very banks that they – or their brethren -- were recapitalizing. Sovereign funds have seemed more willing to buy the equity of banks that are heavily exposed to credit risk than to actually take on credit risk themselves.

-- Perhaps added to pressure in the commodities market by buying into commodity funds. Abu Dhabi’s Taqa certainly seems keen on buying oil and gas assets, even though that hardly helps to diversify Abu Dhabi’s commodity exposure. Taqa is a (leveraged) state enterprise, not a sovereign fund. I would not be surprised if some sovereign funds have been dabbling in commodities.

But absent more disclosure on the part of sovereign investors, it is impossible really know. Particularly in a world where the sovereigns that disclose the least are adding the most to their assets.

UPDATE: For an example of an article asserting that sovereign funds have stabilized credit markets, see this Market Watch article.

"The [sovereign wealth] funds played a role in stabilizing the global credit markets over the last six months, injecting more than $80 billion in bank shares or bank-equity stakes in major American investment banks such as Citigroup"

The actual amount committed to US banks and broker-dealers is more like $40b -- not the $80b mentioned in the article. I don’t even think adding in Barclays and UBS would quite get you up to $80b. But $40b is still a substantial sum, and putting capital in a bank allows it to support a larger portfolio of risky debt. However, evaluating the overall impact of sovereign funds (and more importantly all sovereign investors) would require looking at how sovereign investors have acted directly in the credit market, i.e. have they retreated from credit market risk.

John Jansen also reports that Agencies remain well-bid, and that Russia’s decision to cut its Fannie and Freddie holdings is atypical.

A Puzzle in Japan’s Balance of Payments: What Explains Strong Foreign Demand for JGBs?