One of the mysteries of the global flow of funds is the very large role investors in Europe have played – at least if you believe the US TIC and survey data – in financing the US current account deficit.

Large flows from Europe are a puzzle because Europe – as a whole – doesn’t have a current account surplus.    And there is a lot of evidence that suggest the surplus countries in Europe are the main financiers of Europe’s deficit countries (Spain, the UK and Eastern Europe) – they can finance those countries in euros, and thus avoid exposure to the euro/ dollar.

But there is no question that Europe has been a big source of demand for US financial assets – and specifically for US debt.   “Corporate” debt in particular.   Corporate debt in the US balance of payments sense is a catch all term that includes any long-term claim other than Treasuries or Agencies -- mortgage-backed securities, other asset-backed securtiies and CDOs all count as "corporate debt."

Some of the flows from Europe are pretty easy to explain.    Most of the UK’s purchases of Treasuries, for example, seem to be bought by institutions that are either acting for the world’s central bank or doing a roaring business buying US treasuries when the US market is open and selling those Treasuries to China (and others) when their markets are open.    Every year the survey revises the UK’s holdings of Treasuries down by something like $100b, and revises the holdings of China and others up.    Much the same process likely happens with Agencies, though in that market, Russia could be almost as important as China.

And most corporate debt isn’t a classic reserve asset.

I have long thought that the most likely explanation involved Europe’s role in the intermediation of petrodollars, but I am now starting to have a few doubts.   A surprisingly large share of "European" purchases of US long-term debt may have come from the off-balance sheet activities of US banks.  Those activities were likely offshore (for tax reasons) as well as off-balance sheet (to conserve regulatory capital). 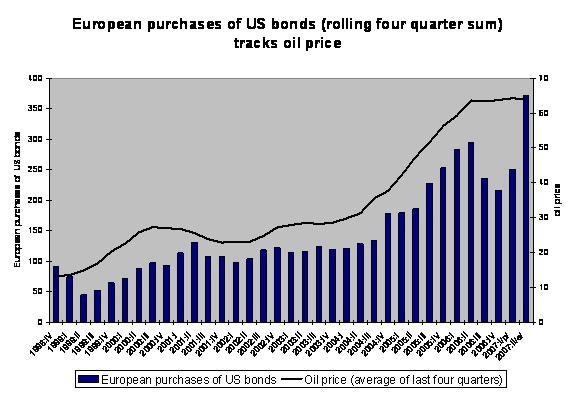 It isn’t all that hard to see how petrodollar flows might show up as European flows in the US data.

The big Gulf investment funds – including the biggest of them all, ADIA (the Abu Dhabi Investment Authority) -- makes extensive use of outside managers.  The portion of ADIA’s US portfolio that is managed externally would show up as private demand from the legal location of their fund managers.

Other oil states have extensive deposits in European banks – deposits that generally speaking are still in dollars.   Those funds are available to be lent out to other financial intermediaries looking to buy US assets.

And finally – and this is probably more relevant for the equity market – some investment funds in the Gulf are known to make use of “structures” for some of their equity exposure.   Basically, they buy embedded equity derivatives that give the upside of a stock’s move (call options).   The banks selling the option hedge by buying the underlying asset …

But increasingly I think something else may be going on.

We now know that a broad range of European banks – along with a few London hedge funds -- set up SIVs to issue short-term dollar denominated paper to buy longer-term dollar-denominated debt.    It was an “easy” way to make profits, one that didn’t require much regulatory capital.    More recently it became an easy way to lose money.

A lot of assets financed with commercial paper “off balance sheet” are migrating back onto to bank balance sheets.   Hung bridge loans are being joined by the assets from hung SIVs, or they may well be if more SIVs have trouble rolling over their commercial paper.   Banks currently hoarding liquidity are certainly anticipating some difficulties …

It also seems like a range of US investors – from private equity firms (KKR) and hedge funds (even those otherwise short subprime) looking for another source of revenue to the big US banks (Citibank, JP Morgan, though JPMorgan has not disclosed how much, State Street)–  also set up a conduits and SIVs.

And it seems like Citi and JP Morgan set up their SIVs in Europe – whether in the Netherlands, Ireland, the UK, Jersey or Luxembourg – for much the same reason Pepsi makes Pepsi concentrate in Ireland (even for the US market) and the big US drug companies like to manufacture their most profitable drugs in Ireland.

Why does this matter?  Well, an SIV set up by a US bank in a low-tax European jurisdiction would count as a European resident – the SIV is an off-balance sheet entity after all, and legally it is likely “European.”    And if that SIV issued short-term dollar paper to buy long-term US debt, its purchases of US long-term debt would show up in the TIC data.  Citi alone has $100b or so of “affliated” SIVs – so the potential flows are large.

It could well turn out to be the case that Americans, not Europeans or the oil sheiks, were the really big “European” buyers of US debt.   Kind of interesting.

Evaluating the relative size of the purchases of American SIVS that were set up in Europe and European SIVS is hard at this stage.    I am confident that some “European” purchases of long-term debt came from US institutions.   But I am not confident they bought more US debt through European financial centers than Europeans did.

This raises a perhaps more important question, at least for the global flow of funds.

Who provided all the dollar financing for these SIVs?   If it came from American money market mutual funds, the overall process wouldn’t generate any net financing for the US.   Outflows from US money market funds to American (and European) owned SIVs financed the purchase of US long-term debt from Europe (an inflow).

But if the SIVs could draw on a global pool of dollar liquidity – a pool that stems in part from offshore petrodollars – it would generate net financing for the US.   The SIVs would sell short-term liabilities in dollars to the world to finance the purchase of long-term US debt.

Update: I should note that the offshore profits of US drug and other IP intensive companies that have built up after the Homeland investment act expired are one potential source of dollar liquidity for the offshore market.