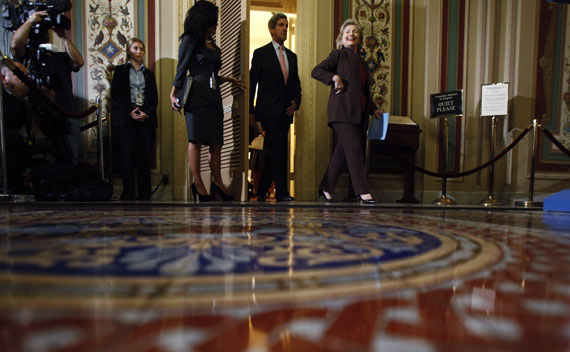 The New START Treaty made it through the weekend intact. Opponents offered two so-called killer amendments, and both failed to get fifty-one votes. (A treaty needs sixty-seven votes to pass the Senate; amendments to a treaty need only a majority.)

The bad news for the White House is that one of the killer amendments received thirty-seven votes. If treaty opponents can hold those votes, then New START is dead. That is a big if, of course. Senators have been known to use their votes on amendments to give themselves leverage with the White House on other issues or to provide political cover for themselves on a final vote.

Sens. Mitch McConnell (R-KY) and Jon Kyl (R-AZ) both have officially come out against New START. McConnell says the treaty could constrain U.S. missile defense and that its verification requirements are too weak. And he doesn’t like having the calendar used to force a vote—“rushing it right before Christmas, it strikes me as trying to jam us.”

McConnell’s and Kyl’s opposition could be pivotal. They are, after all, the number one and two figures in the Senate Republican leadership. They have some clout to reel back Republican senators leaning toward a “yes” vote. Peter Baker notes in the New York Times that no arms control treaty has ever passed “without the support of the Senate minority leader.” Administration officials would no doubt observe that is like saying no major league baseball team has ever come back after being down three-games-to-none in the playoffs. It is true until it isn’t.

Today the Senate meets in closed session to discuss classified intelligence about New START. Such sessions may or may not provide senators with genuinely new information. But they can provide them with a reason (or excuse) to take a position—or to change one already taken. On that score, the White House couldn’t have liked reading what Sen. Susan Collins (R-ME) told POLITICO.

I announced my support for the treaty a week ago based on the work I’ve done on it in the Armed Services Committee but we’re having a classified briefing [Monday] afternoon and it’s always possible I could learn something new from that, that would cause me to change my mind.

The next big step is a cloture vote tomorrow. Sens. Richard Lugar (R-IN) and Olympia Snowe (R-ME) say they will vote for cloture. So if Democrats stick together they will muster the sixty votes needed to force a vote on Wednesday.

Between now and then expect the rhetoric to heat up. Sen. Majority Leader Harry Reid threw some “chin music” at treaty opponents this weekend, suggesting that they want the bad guys to win.

You either want to keep nuclear weapons out of the hands of terrorists or you don’t.

One senator to watch will be John McCain (R-AZ). He voted last week to begin debate on New START, but in a floor speech on Thursday he lambasted Russian leaders:

How in the world are we going to trust them to adhere to a treaty? When we consider the crimes and abuses of this Russian government, it’s hard to believe this government shares our deepest values.

That doesn’t sound like someone about to give New START a thumb’s up.

Which way will the vote likely go? The complaints coming from anti-treaty forces about being rushed suggest they are losing. Presumably a “rushed” vote doesn’t bother you if the outcome is going your way. But the outcome is always up in the air on on close votes where senators are feeling intense pressure to hew to a party line. As the saying goes, those who are talking don’t know, and those who know aren’t talking.