How Venezuela came to claim the region’s highest murder rate. 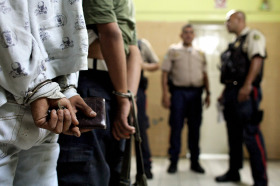 Mention violence in Latin America today and most people think of Mexico. But if you compare the numbers, Latin America’s hotspot is somewhere else entirely: Venezuela, whose homicide rate far surpasses Mexico’s. Under a decade of President Chavez, Venezuela’s homicide rate has increased by about 140 percent, making Venezuela one of the most violent countries in the world.

Not surprisingly, crime in Venezuela has become political enemy number one. According to Latinobarometer, a well regarded regional polling agency, Venezuelans see crime and public safety as the number one challenge for their country; and Venezuela is the only Latin American country where crime is the most important personal issue cited by respondents. Crime was a major concern for voters in the run-up to the November 2008 regional elections. In speeches and ads Chavistas and opposition leaders both blamed the rising violence on their opponents. Perhaps unsure who was culpable, the Venezuelan vote was a draw. Chavez supporters won most of the states, but the opposition won five of the most populous states and some key mayorships, including that of Caracas, meaning that almost half of Venezuelans now live under opposition local governments.

So how bad is it? First, some regional context is necessary. Throughout Latin America, homicide rates hover at three times the global average. But even within that high cohort, Venezela now holds top rank – by far the highest in South America. Violent deaths have more than doubled since 1998, rising from 20 per 100,000 to 48 per 100,000. In Caracas, the government estimates an even higher 130 per 100,000 inhabitants, or seven deaths a day (though some experts believe the true number is closer to 160). By comparison, the murder rate in Capetown, South Africa, is 62 deaths per day. In the region, Mexico’s homicide rate is half of Venezuela’s: 24 per 100,000. Even the former murder capital of South America, Colombia, claims a rate around 40. In fact, the only close comparison in Latin America is the Colombian crime rate in the 1990s, when druglord Pablo Escobar and his rivals were tearing the state to shreds. These murders occur mostly at night, and spike every two weeks around payday. Young people are increasingly the victims, now three times as likely to be killed today than ten years ago.

There are any number of conjectures as to how things got so bad. Venezuela does share some of its neighbors’ security challenges – most notably drug trafficking. The U.S. Drug Enforcement Agency (which was kicked out of Venezuela in 2005), claims drug shipments passing through the country have increased tenfold during Chavez’s tenure. The U.N.’s Office on Drugs and Crime has also tracked Venezuela’s growing role in the drug trade, and believes it is now the major transit country for shipments to Europe. This is surely linked to some rise in violence – but not all.

As in other Latin American countries, a substantial part of the problem rests with the police force. The Venezuelan police have neither the ability, nor skills, nor an interest in properly investigating crimes. In promotions, loyalty is prized over capacity, and some even suggest the government has encouraged the selective enforcement of its laws -- for instance, ignoring tire burning and petty crime in poorer neighborhoods in order to avoid conflict with Chavez’s support base: the country’s poor. If the often cited “broken windows” theory holds true, allowing these petty infractions creates a climate of lawlessness that opens the door for more serious and violent crimes, such as murder. National polls show that the vast majority of citizens believe the police are involved in many of the crimes committed, with a full one-fourth of respondents claiming the police are behind nearly all crimes committed. As a result, most crimes are not even reported, leaving little to dissuade the criminally inclined.

A poor justice system is also to blame. Only three of every 100 murderers are actually sentenced. Courts are underfunded and politicized, as they often serve the interest of the government over justice. Some experts in fact link a rise in police brutality to a lack of confidence in the judiciary; police officers are more inclined to take justice into their own hands, knowing the courts will be unable or unwilling to intercede.

But the rise in violence may also have something to do with Chavez’s particular way of governing. During his weekly address “Alo Presidente” and other speeches, Chavez incites violence against anti-government protesters, justifies law breaking, accuses political figures, the media, and others of crimes, and calls on the citizenry to take on the role of the enforcement forces into its own hands. As a result, after a decade of Chavez’s rule, respect for rule of law has dwindled. Those that support the president know they can act with impunity, while those that oppose him often fear even expressing themselves.

Until recently, Venezuela had the fiscal wherewithal to do something about its crime. Several years of high oil prices allowed Chavez’s government to ramp up spending, quadrupling it from $17 billion in 2003 to over $70 billion for 2009. Billions of these dollars went to the Misiones Bolivarianas, Chavez’s centerpiece redistribution programs to bring health care, literacy programs, housing, and subsidized food to Venezuela’s citizens. Chavez doubled the defense budget, allowing the military to purchase submarines, aircrafts, helicopters, and over 100,000 AK-47-type rifles from Russia.

But very little from the oil bonanza trickled down to a basic security system desperately in need of an overhaul. The President responded to the growing calls to do something about rising crime by creating a new centralized National Police Force to eventually replace Venezuela’s numerous local forces. But rather than establishing firm and functioning democratic institutions; the new armed force appears to be just another organization at the beck and call of the executive branch.

What is most unusual in Venezuela is that crime rates skyrocketed as poverty decreased. Now, with the economy in freefall, things could get even worse. And Chavez is not helping. Over the last three months, as pointing fingers at the “American empire” has failed to pay dividends, Chavez has shifted his strategy and attacked the opposition, stripping the new opposition mayor of Caracas of much of his authority, accusing the TV station Globovision of “"media terrorism” and threatening to close it down, and bringing what may prove to be unfounded corruption charges against prominent (and popular) opposition leaders. As the Venezuelan government moves farther down the path to authoritarian rule, law enforcement institutions will surely follow, bending and breaking the rules as necessary.

Venezuela’s institutions are threatened not just by drug traffickers, organized crime, or guerrillas, but also by the decisions of elected officials. It is this challenge the Venezuelans now face, holding in the balance their safety, their prosperity, and increasingly, their very lives.

Swine Flu, the Drug War, and the Mexican State