In news that you may have missed while strategizing about Article 50, thinking about ways to recapitalize Italian banks or pondering the future course of the renminbi ...

Japan’s May household consumption data, based on the demand side household data, surprised to the down side.* And the trend here is, alas, clear. Real household consumption has fallen ever since Japan started its fiscal consolidation in 2014. 2016 does not look to be any different: 2016 consumption is running about 6 percentage points lower than in 2013. 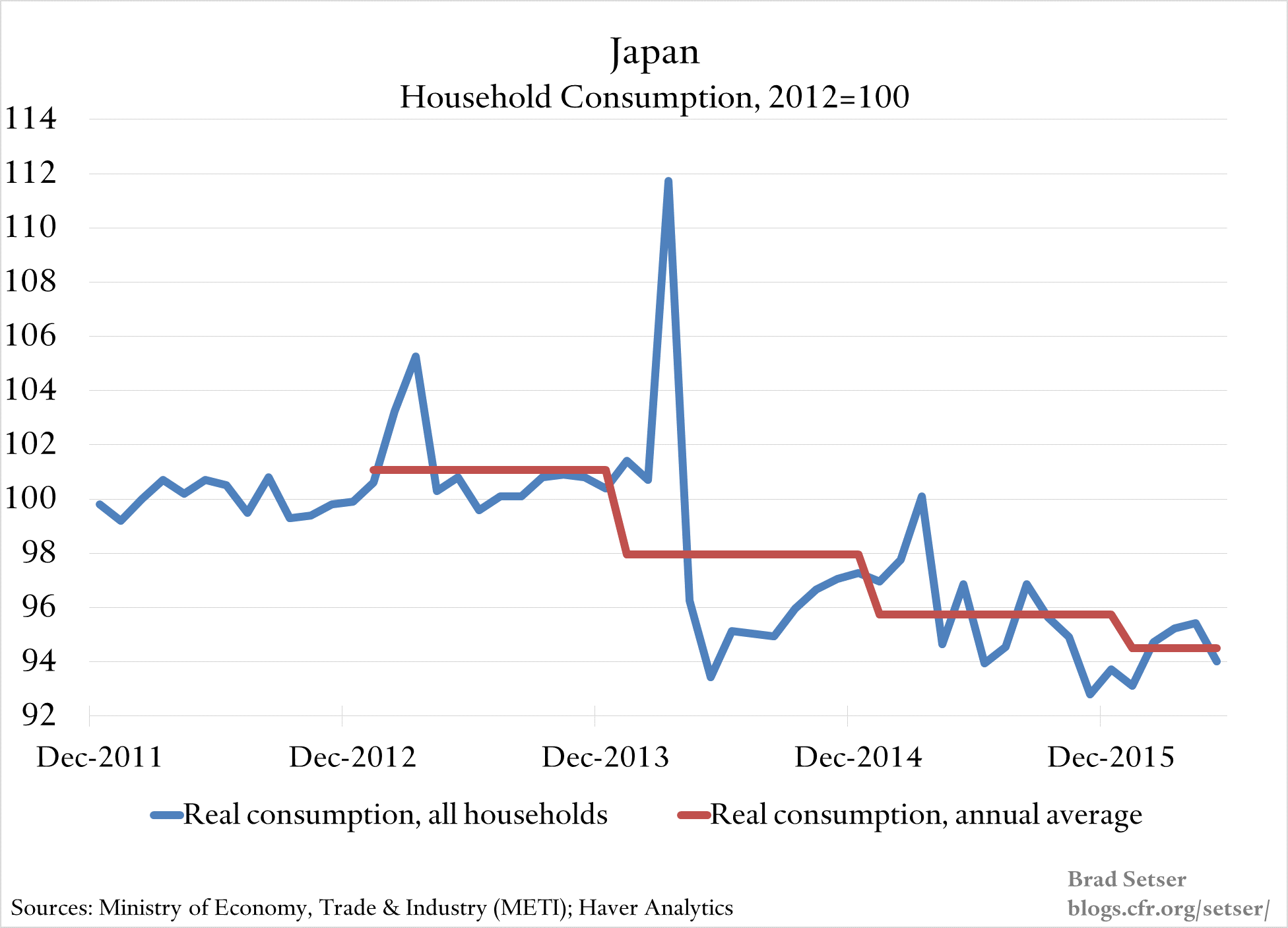 I consequently do not think there is any real mystery as to why Abenomincs is floundering a bit.

It is not primarily a result of the difficulties the Bank of Japan (BoJ) faces keeping the yen weak without breaking the G-7 currency peace through direct intervention. A weak yen on its own did not prove to be a boon to internal demand in 2015.

Nor is it in any simple way a function of a failure to deliver on structural reforms: I agree with Larry Summers’ recent comment that many "OECD standard" reforms have an ambiguous impact when deflation is more of a concern than inflation.

Rather, Japan’s troubles stem from a series of policy choices that had a fairly predictable negative impact on household demand.

One of Abe’s main structural reforms was to shift the incidence of tax away from firms and toward households. Corporate income tax rates were reduced, while the consumption tax was raised. This meant the already high-savings corporate sector got a break, while the low-saving household sector got more of the tax burden.

A weaker yen in the first instance also lowers household income while raising corporate income. Higher prices on imported food and energy tend to be passed on, lowering household’s real income when nominal wages are flat. The profits of Japanese firms with strong export franchises go up, but that only raises household income if Japanese firms respond by increasing investment and bidding up wages. The yen’s post-2012 depreciation has produced a modest upturn in export volumes (Exports have increase by a bit more than 1.5 percentage points of Japan’s GDP since the end of 2012 and net exports have contributed about a percentage points to growth over the last three years. Conversely, if the yen had stayed around 80, exports would likely have fallen). But most of the windfall profit from the yen’s 2012-2015 down move seems to have been saved. Firms clearly have not been willing to bid up wages. Nominal wages in May were down year over year.**

And above all, the burden of Japan’s 2014 and 2015 fiscal consolidation has been borne by households, and heavily by lower-income households. It is at least possible that the expected impact on household demand from future consolidation is also having an impact on investment. Why invest today to deliver goods and services in the future when when household demand inside Japan is falling, and could fall more? Investment hasn’t responded to monetary stimulus in the way Japan had hoped. Hence wonderful anecdotes, such as this FT story about corporate Japan’s skill at rehabilitating 1990 era computers to keep costs down.

Fortunately, there are now some signs that revising household consumption is now moving to the center of the policy agenda in Japan. Daiwa’s research institute is certainly thinking along these lines: "It would not be an exaggeration to claim that the most important challenge currently facing Japan’s economy is to get personal consumption back on the road to recovery from its recently stagnant condition"

And maybe the IMF is too?

* The Bank of Japan has recently put out a new index based on supply side data that it argues will better map to GDP. That index was also down in May. Generally speaking though, the BoJ’s consumption activity index shows a somewhat smaller fall in consumption since 2013 than the household survey data.

** Real wages rose, but only because nominal wages fell more slowly than nominal prices. That isn’t exactly the reflationary equilibrium where higher expected inflation result in a shift in price-setting throughout the economy that Kuroda was aiming for ...

There Are a Couple of Reason To Think the U.S. Trade Deficit Will Continue to Rise This Year

Japan: An Opportunity in the Post-Corona World