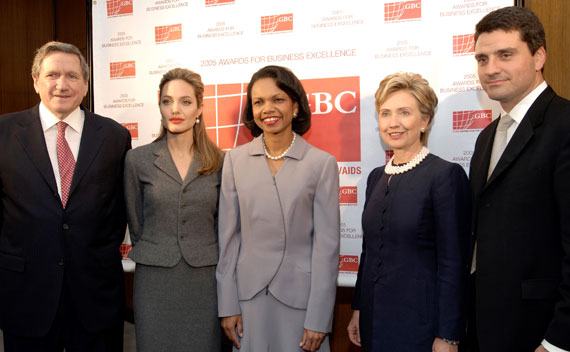 Yesterday I blogged on an article in Sunday’s New York Times Magazine about John Prendergast’s efforts to enlist celebrities to help bring attention to humanitarian disasters in Africa.  A sharp-eyed TWE reader immediately emailed to point out a related article in the Style section of the Sunday New York Times on Trevor Neilson, philanthropic adviser to the stars.

Neilson, along with his wife Maggie and their friend Ann Kelly, runs a company called Global Philanthropy Group.  The firm advises its 20 clients on how to make a difference on issues they care about.  Clients include Ashton Kutcher, Shakira, Ben Stiller, Olivia Wilde, John Legend, and Tory Burch.  (Yes, to the horror of my four teenage children I had to google a few of those names.)  Another firm, the Endeavor Group, provides similar services.

Before you scoff at these efforts, consider the following observation by Neilson on Bono’s good works:

For some reason, cynicism is cool.  But in my view any dollar that can be brought into an issue, any visibility that can be brought, is something that wasn’t there before.  Bono didn’t start off as Bono.  He was just this Irish rock dude who went to Ethiopia, experienced the famine, and became who he is today.

It’s hard to kvetch about people wanting to make a difference.

In all, the article is a fascinating read. Because the domestic determinants of American foreign policy is one of my primary intellectual interests and because I suspect that celebrity activism is here to stay, I hope some graduate student out there is writing a dissertation on the topic. (It sure would beat yet another study of pork barreling in Congress or of "regime" formation in international relations.)  When does celebrity advocacy succeed?  How do governments deflect, co-opt, or respond to celebrity activism?  Does celebrity activism actually hurt sensible foreign policy by encouraging the simplistic and the symbolic over the sensible as some critics in the developing world as well as the developed world argue?  A dissertation that tackled those questions is one I would like to read.

Our Test Scores Are In