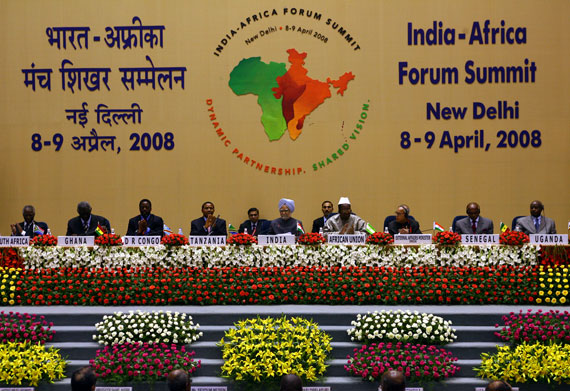 My latest “DC Diary” column is out in India’s financial daily, the Business Standard. And it’s premised on a pretty straightforward question about U.S.-India relations: Now that India has a seat at many of the top tables of international relations, why is America’s dialogue with India less global in scope than with any major power, even China?

The good news, I think, is that the two sides have established some new dialogues in recent months, including a timely and important exchange on East Asia and China. But the ultimate test won’t be how many meetings the two governments hold but whether they turn common interests into complementary policies around the world.

And the record, unfortunately, is mixed.

Despite dramatic changes in both Indian and American policies, the United States and India still have a long way to go. For years, the United States has held standing dialogues about nearly every corner of the earth with Brussels, Tokyo, and Beijing. In some cases, it has coordinated approaches or fashioned complementary policies with them—for instance, establishing a strategic foreign aid partnership with Japan and even pursuing a joint agricultural project with China in Angola.

So, while the new U.S.-India dialogues on East Asia and other regions are essential, what the two governments ultimately need is to coordinate approaches to East Asia and the Persian Gulf, where they share vital interests, and—farther afield—Africa and Central Asia, where shared interests exist but are more elusive.

Why has the relationship been so narrow in scope?

One reason, I suspect, is that India’s foreign policy is in flux. In some senses, at least, India is a jumble of contradictions: It is a maritime nation—strategically situated at key chokepoints—but with a continental strategic tradition. It was nonaligned but, in essence, aligned itself with the Soviet Union, particularly after 1971. It’s a nation of illustrious mercantile traditions that long closed up many aspects of its economy.

Debate now rages in India about its role in the world—and the proper instruments to support Indian interests. These debates are by no means resolved, yet overt partnership with the United States is still politically explosive to many in India.

But much of what India is saying and doing is unprecedented in its diplomacy: It has backed U.S.-supported resolutions against Iran in the IAEA three times, and enforces UN Security Council resolutions against Tehran. It has stopped a North Korean ship in Indian waters and inspected its cargo. It is the fifth-largest donor of reconstruction assistance to Afghanistan. It participates in nearly every U.S.-supported multinational technology initiative for tackling climate change, including projects on hydrogen, carbon sequestration, and nuclear fusion. It is harmonizing its export controls with current Nuclear Suppliers Group and Missile Technology Control Regime guidelines, and has committed to adhere to these guidelines in future. It provided tsunami relief in 2004 through an ad hoc naval partnership with the United States and two of Washington’s closest military allies. India’s military conducts exercises with every U.S. armed service, and has exercised trilaterally with the United States and Japan, despite Chinese protests.

For a country that cherished its nonalignment, this sort of public association with the United States shatters long-standing reflexes in Indian diplomacy.

But whether India continues to associate with the United States in this way may depend on the outcome of wider debates over the direction of India’s foreign policy. And it will depend, too, on whether the United States takes India seriously as the more global player it is on track to become. That’s a subject I’ve written on before, including here. And I’ll blog more on it as President Obama’s November 7 trip to India approaches.

Wen Jiabao’s Last Stand on Political Reform: Can he do it? Yes he can?