One common argument -- at least prior to the crisis -- was that sovereign investors, because of their long-term focus, were generally a stabilizing presence in the market. Sovereign wealth funds in particular. And presumably central bank reserve managers as well. After all, in many cases, the line between a sovereign wealth fund and an aggressively managed central bank reserve portfolio is rather thin.*

These arguments were always a bit hard to assess. There isn’t enough data on the actual actions of sovereign funds to evaluate their true impact on the market. Did sovereign funds step up their purchases of equities when the markets went down? Or were they sellers then?

Central banks rather suddenly stopped buying Agency bonds, pushing Agency spreads up -- at least until the Fed stepped in.

And, as the latest BIS bank data makes clear, they also withdrew large sums from the international banking system. The following chart comes table 5c in the BIS locational banking data; it shows the annual change in the deposits that the world’s reserve managers hold in the banking system.** 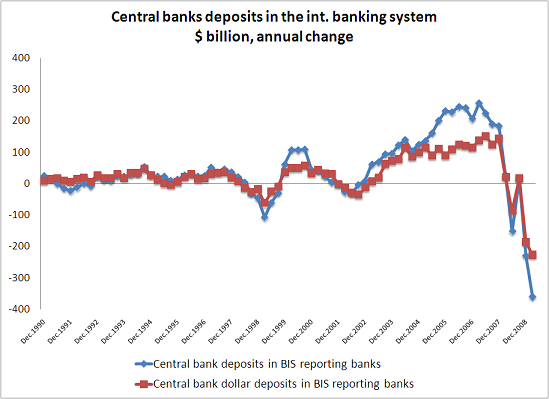 To be sure, central bank reserve managers weren’t the only ones pulling money out of big international banks. Money market funds were too. But the loss of $400 billion in deposits -- $220 billion in q4, another $170 billion in q1 -- from the world’s reserve managers added to the pressure a lot of banks faced. Including, I would guess, some European banks with large dollar balance sheets; that is one reason why there was "extraordinarily high demand for dollars from foreign financial institutions" during the crisis.

A central bank that is intervening to support its currency during a crisis will, of course, need to run down its foreign assets. Some of the fall in central banks’ deposits in the international banking system during the past crisis consequently is just a reflection of the fall in reserves.

But some of it also reflects a flight to safety. Remember the surge in central bank purchases of short-term T-bills during the crisis? 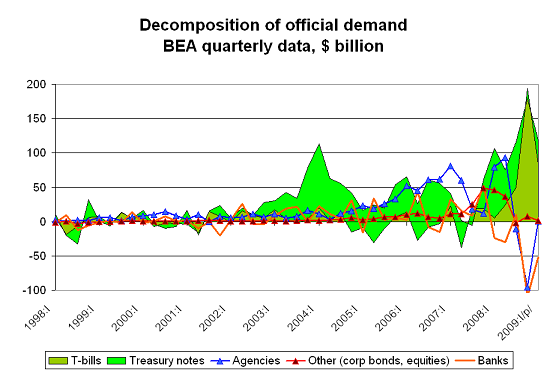 Central banks were, in aggregate, big buyers of Treasuries during the crisis even as their total assets fell. In fact, central bank demand for Treasuries was -- for a while -- going up even as the world’s dollar were were, best I can tell, going down. 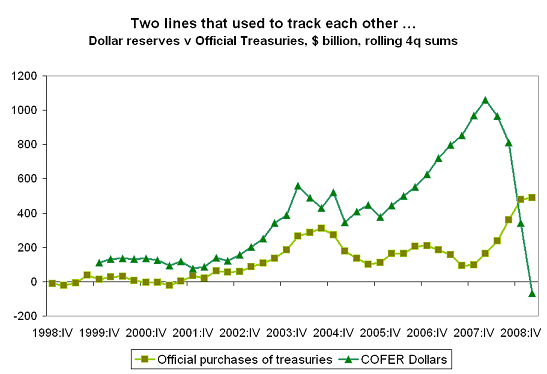 The Fed -- helped by the US Treasury, which sold a lot of T-bills during the crisis and put the funds on deposit at the Fed so the Fed could act as dollar lender of last resort to the global banking system -- was able to offset these shifts. The US government in effect lent dollars to the banks that were losing dollar deposits as the world’s reserve managers shifted into Treasury bills. It all sort of worked.

The crisis was contained.

The flight to safety on the part of the world’s reserve managers during the crisis was understandable -- and individually rational. No reserve manager wanted to have funds (uninsured funds) in a bank that failed. But it also wasn’t stabilizing.

My conclusion: reserve managers need to be cautious as they seek yield in good times, as they are fundamentally loss-adverse. That aversion to losses can, in some circumstances, prove to be a destabilizing force in the market. And, of course, the regulators of the major international banks also need to do a better job ...

** The BIS data is adjusted for valuation effects