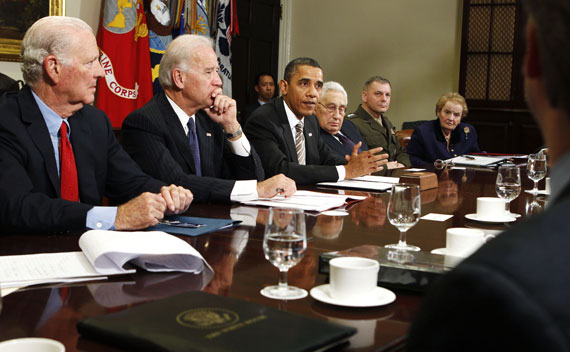 The White House can count well as anyone else.  Passing the New START Treaty during the lame-duck session means holding all fifty-eight Senate Democrats and picking up nine Republican votes.  But only one Senate Republican, Dick Lugar, is publicly committed to voting yes. And at least one Democratic Senator, Joe Manchin of West Virginia, is sitting on the fence.  That is not encouraging news.

Presidents usually want to know the answer is yes before they ask the question. So why the gamble against long odds?

I can think of at least five calculations driving White House thinking:

1. If not now, when? Once the new Senate convenes in January, President Obama will need fourteen Republican votes. The chances of success may be questionable now, but they will more questionable later.

2. Confidence that the treaty’s merits—and fears about the consequences of its defeat—will carry the day. The public might rally behind the White House as news coverage highlights the fact that New START has been endorsed by a who’s who of military leaders and foreign policy luminaries, including Republican grandees such as Henry Kissinger, Jim Baker, and Brent Scowcroft, and that the treaty’s defeat could hurt U.S.-Russian relations and efforts to keep Iran from going nuclear.

3. New START is not a core partisan issue, so Republican opposition is not rock solid. More than enough Republican senators would vote for New START if it were a secret ballot.  Demanding a vote puts pressure on Republicans and increases the chances that their united front will crack.

4. A treaty fight could shift the political momentum. November has been a tough month for Obama.   A showdown over START could be a game changer if voters conclude that Senate Republicans are more interested in undermining Obama than promoting the national interest.

5. Better to go down swinging than looking. New START’s chances of passing may be iffy regardless of when the president pushes for passage.  But sitting idly by while a top administration priority dies will only fuel talk of a feckless president.  Trying and losing beats just losing.

In my next post I’ll look at the Top Ten reasons Republicans won’t blink first.