I am participating in the Mellon Sawyer seminar on “debt, sovereignty and power” at Cambridge University today and tomorrow.   Expect light blogging.

My own intervention will focus on a topic close to my heart – “Can the world's biggest borrower also be the world’s greatest power?”   The question can perhaps be framed a bit differently:  does the maintaining the “balance of financial terror” require that the US accept some constraints on its own policy choices, or can the US count on the world’s central banks for financing no matter what policies it adopts?

I suspect opinion here divides on the question of whether or not the United States’ current dependence on Chinese financing – and specifically Chinese government financing, since private Chinese savers currently prefer RMB to dollars --  is a good thing, or a source of concern.

One point though shouldn't really be open to all that much question: US dependence on official Chinese flows has now reached a rather impressive level.  If current trends continue – the US current account deficit is around $200b a quarter in the second half of 2007, Chinese reserve growth is around $125b a quarter and Chinese keeps around 70% of its reserves in dollars – China could end up providing close to ½ of the net financing the US needs to sustain its current account deficit in 2007. 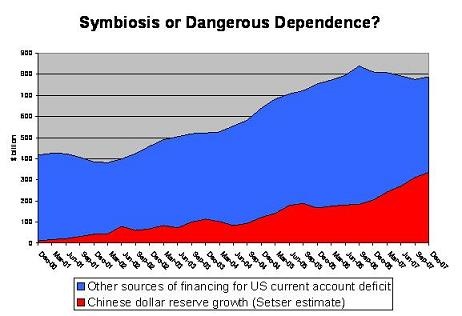 China provides a smaller share of gross inflows than net inflows.  But unless you think Chinese inflows have induced a large share of the outflows – the net is what matters.  Without a big net inflow from China, the US economy would look very different.   The current account deficit would be smaller.   Some of key financial variables – little things like benchmark interest rates – might be different.   And the composition of US output would likely be a bit different as well.

US economic and financial stability may now depend as much on continued financing from the Chinese government as on the continued flow of Saudi oil.

On the other hand, it isn't clear that stability should be the goal for either US or Chinese policy -- not if stability means the continuation of the current trajectory, one where the share of the US deficit financed by China is rising steadily, and the intensification of the balance of financial terror.