I have been a bit slow to comment on the updated fiscal plan, but wanted to offer my own take:

1) Best I can tell, the new plan has roughly 2 percentage points of GNP in fiscal adjustment in 2018 and 2019, and then a percentage point a year in 2020 and 2021. The total consolidation is close to 6 percent of GNP (using a GNP of around $65 billion, and netting out the impact of replacing Act 154 revenues with new tax)—see page p.10 of the revised plan, and my past posts on Puerto Rico’s fiscal math.**

2) The board adopted a more conservative baseline. Puerto Rico’s real economy is projected to contract by between 3 and 4 percent in 2018 and 2019 and by 1 to 2 percent in 2020 and 2021. I applaud the board for recognizing that the large fiscal consolidation required in 2018 and 2019 will be painful. The risks to the growth baseline—and thus to future tax revenues—should be balanced. There though is a risk that the board may still be understating the drag from consolidation. If Puerto Rico is currently shrinking by 1.5 percent a year without any fiscal drag, and if the multiplier is 1.5, then growth might contract by 2 to 3 percent in 2020 or 2021.

3) While creditors have complained that Puerto Rico isn’t doing enough, I worry that there is still too much consolidation too fast: Puerto Rico’s output is projected to fall by another 10 percentage points over the next five years, which would make Puerto Rico’s ten year economic contraction as deep as that experienced by Greece. 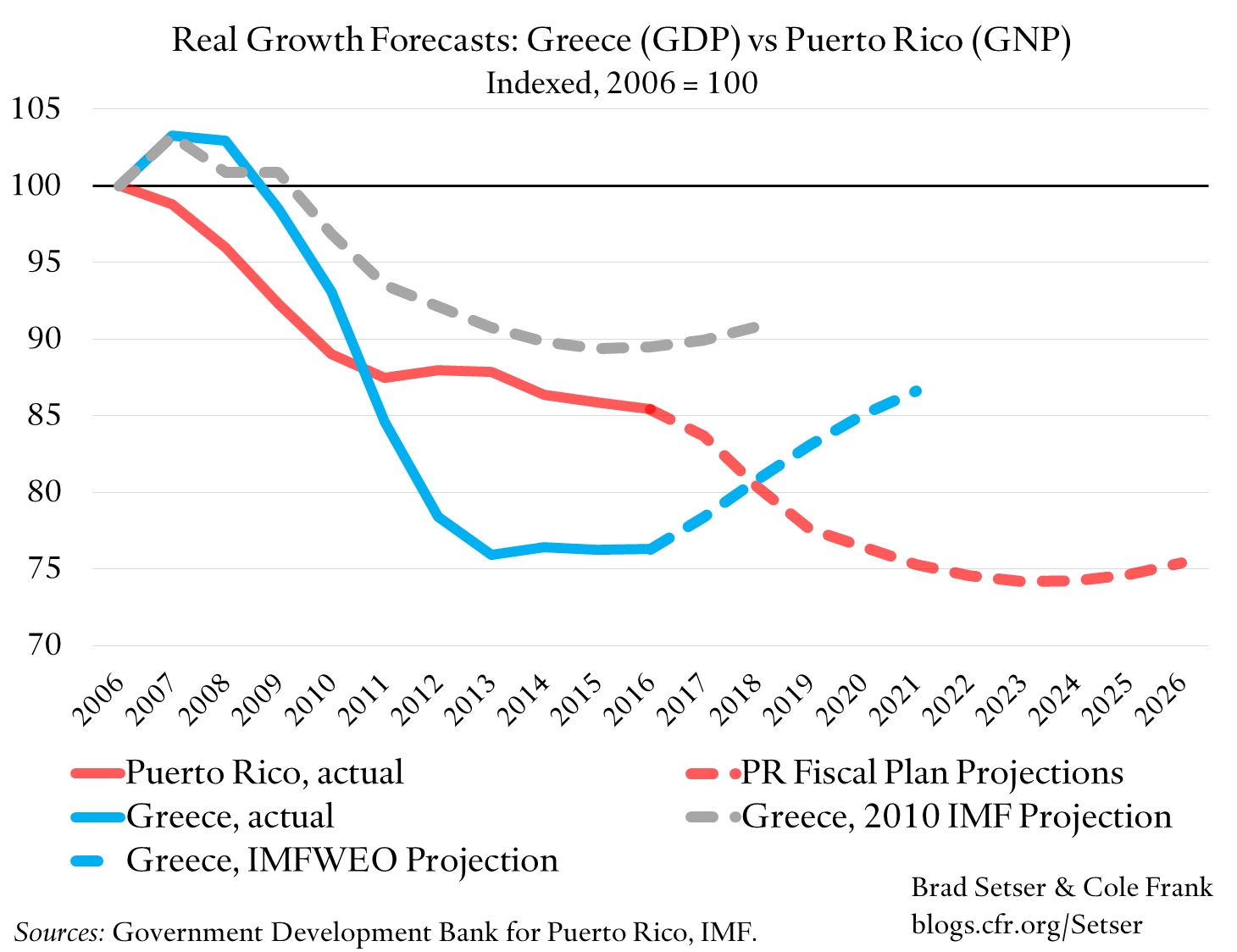 Sadly, this is a realistic outcome if you combine five to six percentage points of consolidation, a multiplier of 1.5 (especially as much of the consolidation is offsetting a fall in federal funding) and negative trend growth. There is a real risk that the coming contraction generates further outmigration, undermining the basis for any eventual recovery. Puerto Ricans are not required to stay on on-island. A shrinking population ultimately means a shrinking tax base.

4) The overwhelming majority of the adjustment is the result of the need to offset the exhaustion of pension assets and the loss of federal health care funds, not the result of projected debt service (the primary surplus in the plan is between 1 and 1.5 percent of GNP). Basically, Puerto Rico tried to avoid a draconian consolidation after its 2007 slump through running down pension assets (and for a while running up debt) and by taking advantage of Obama era policy changes—but now has run out of rope.

5) There is a strong case that any new federal health funds should be used to reduce the magnitude of the fiscal adjustment and give Puerto Rico a better chance to return to growth, not to increasing near-term debt service.

6) One advantage Puerto Rico traditionally has had is that the impact of any fall in local economic activity is muted a bit by parts of the federal safety net—SNAP (food stamps) for example. Another is that Puerto Rico receives a boost from federal housing funds and federal highway funds. I consequently worry, though, that changes to the federal budget over the next few years may introduce a further shock to Puerto Rico’s finances if federal programs that benefit Puerto Rico end up on the chopping block. The last thing Puerto Rico needs is a reduction in federal support when its economy is already depressed.

* The barriers to entry to a discussion on Puerto Rico’s debt are high. The debt stock is fiendishly complex, and the legal issues around the relative priority that should be granted to different parts of the debt stack will likely be litigated for years. The core problem is that two groups of creditors—those with constitutional priority and those with a clawback-exempt sales tax pledge—believe that they should be preferred, and there isn’t enough money to come close to paying both (the clawback provisions in some other bonds allow Puerto Rico to revoke the pledge of specific tax streams—the pledge of the gas tax to the highway bonds for example—if Puerto Rico lacks revenues to pay its constitutionally prioritized debt). See John Dizard, among others.

** I adjust the headline measures summarized on p. 10 of the fiscal plan down by about a billion to estimate the fiscal impact, as a portion of the tax measures replaces revenues from Act 154 with new taxes that likely will have similar incidence (see p. 18 of the plan for details of the tax measures). Act 154 is effectively paid by multinationals operating in Puerto Rico for tax reasons, not by the Puerto Rican economy.