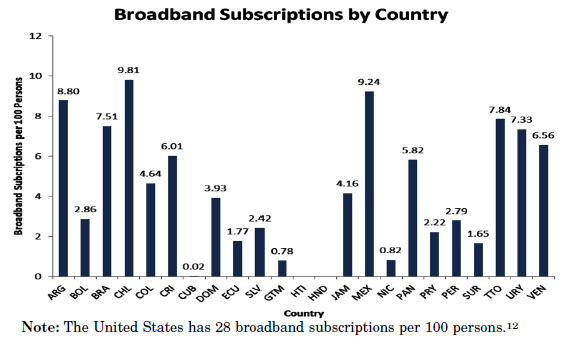 The Senate Foreign Relations Committee recently released a report penned by Carl Meacham titled “Latin American Governments Need to ‘Friend’ Social Media and Technology,” calling on U.S. policymakers to recognize and harness the growing power of social media in Latin America. Some of its most interesting findings include:

Overall it is an interesting and fairly positive technological look at the region. While Latin America falls behind Asia in terms of access to the Internet, the region’s citizens are more socially connected – at least as measured by Facebook, Twitter, and the like. These connections have had and can have broader political and economic impacts than just catching up with family and friends. Social networking has already played big roles in Colombia, with a Facebook-led series of marches against the FARC in 2008 that spread throughout the country (and as far as New York and Chicago), and in Mexico, where twitter updates on drug violence give people vital information the local press and governments are no longer able or willing to provide. Some even see the arrival of social media to Latin America as a great democratizer – helping open up governments (like in the Arab Spring) and media monopolies.

While there is much potential, we should be cautious about what social media can and cannot do. As Meachem’s report shows, Internet access is still limited and, in my experience, expensive (though the spread of smartphones and data plans could help this). Until it becomes more accessible, social networking’s grander democratizing possibilities are pretty limited. But these network can – and in some places already do – change the ways some Latin Americans interact, mostly for the better. And as the world globalizes, these ties, and the spread of technologies, will only become more important.