Today marks the one hundredth anniversary of Congress declaring war on Germany, thereby thrusting the United States into the Great War, or what we know today as World War I. The vote was a major turning point in U.S. history. For more than a century, Americans had steered clear of Europe’s political affairs. They had been good students of George Washington, who said “It is our true policy to steer clear of permanent alliances with any portion of the foreign world,” and of Thomas Jefferson, who recommended "Peace, commerce, and honest friendship with all nations-entangling alliances with none." Suddenly, however, American boys were headed “over there.”

It took a lot to persuade Americans that the Great War was their war to fight. President Woodrow Wilson had declared the United States neutral when the fighting began in Europe in August 1914. The rape of Belgium didn’t prompt Americans to the change their minds. Neither did the sinking of the Lusitania. Or the Ancona. Or the Sussex. Or the Black Tom explosion. Public sentiment only shifted decisively in early 1917 after Germany resumed unrestricted submarine warfare and then news broke of Berlin’s effort to entice Mexico into attacking the United States. Even after entering the war, Americans found it hard to give up old habits; the United States insisted it was fighting alongside Britain and France as an “associated power” and not an allied one.

As important as World War I is in U.S. history, most Americans today know far less about it than about the Revolutionary War, the Civil War, World War II, or Vietnam. A century ago William Jennings Bryan, Robert Lansing, and General John “Black Jack” Pershing were household names. They are seldom mentioned today.

Fortunately, if you want to learn more about World War I and how it shaped America, PBS has a show for you: “The Great War.” It’s a six hour, three-night special that will air from April 10-12. (Check your local listings for when it will air on your area.) Here’s the trailer:

“The Great War” is terrific film-making. It explores not just the hows and whys of America’s entry into the Great War, but also its consequences. It’s a story of paradoxes. Americans entered the war reluctantly but embraced it with patriotic fervor. Wilson campaigned on a pledge to keep America out of war but five months after winning reelection asked Congress to wage one. He justified the war on the grounds that “the world must be made safe for democracy,” but then helped lead a massive curtailment of civil liberties. “The Great War” introduces all the leading political figures of the day while at the same time highlighting the experiences of ordinary Americans both on the front lines and at home. And it tells the war’s story against the backdrop of the other major issues of the day: rising immigration, the suffragette movement, and growing racial animosity. In all, it’s must see TV.

PBS is not the only place you can learn about World War I. Many museums are commemorating the centennial with special exhibits. If you are visiting Washington, DC, check out the Library of Congress. It’s showing “Echoes of the Great War: American Experiences of World War I." The exhibit, which runs through January 2019, examines how Americans, both at home and on the front, dealt with the war.

While you are in DC, you should also check out the National Archives. For the next month it is displaying the joint resolution that formally declared war on Germany. 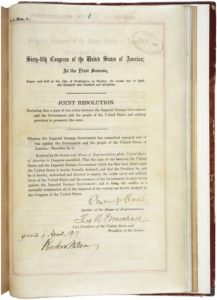 You’re also in luck if you’re in the City of Brotherly Love. The National Museum of American Jewish History in Philadelphia is hosting “1917: How One Year Changed the World” until July. (If you go today, admission is free.) The exhibit looks at three critical events in 1917: America’s entry into World War I, the Bolshevik Revolution, and the Balfour Declaration. Among other artifacts, you can see a decoded copy of the Zimmermann Telegram and two original drafts of the Balfour Declaration. The National Museum of American Jewish History offers an added bonus: it is located across the street from Independence Mall. So if you take a few more steps you can visit Independence Hall and see the Liberty Bell.

Just a mile away, the Pennsylvania Academy of Fine Arts is hosting its own World War I exhibit, “World War I and American Art.” PAFA bills the show as “the first major exhibition devoted to exploring the ways in which American artists reacted to the First World War.” John Singer Sargent’s masterpiece Gassed, which shows British soldiers blinded by mustard gas being led to a medical station, is the exhibit’s centerpiece. Just as interesting, at least to me, are the many propaganda and recruiting posters. They offer competing visions of the war’s ultimate meaning: preserving liberty or delivering death and destruction. But if you want to see the exhibit, you have to act fast. It closes this Sunday, April 9.

One museum I haven’t visited is the National WWI Museum and Memorial in Kansas City, Missouri. It’s closed today for a commemoration ceremony entitled “In Sacrifice for Liberty and Peace." But when it reopens tomorrow you can check out its four special exhibits: “Fields of Battle, Lands of Peace: The Doughboys 1917-1918,”“Posters as Munitions, 1917,” “Vive l’Amérique: French Children Welcome Their American Ally,” and “Revolutions! 1917.”

If you know of any other exhibits or documentaries on World War I and its consequences, please list them in the comments section below.

Corey Cooper assisted in the preparation of this post.

U.S. Needs to Plan for Changes in the Arctic