There is a lot of interest in reserve diversification.

And most of those present at the May Euromoney fx conference in London—judging from the audience poll – believed that at least some central banks are diversifying.

My comments back then emphasized the unprecedented pace of reserve growth rather than diversification.   Large-scale diversification seems hard to square with the record growth in central bank custodial holdings of Treasuries and Agencies reported by the New York Fed.

My argument fell flat.   I sort of understand why.

Flows drive markets and at the time the most visible flow in the currency market came from ongoing central bank sales of dollars for euros, pounds and a few other currencies.   G-10 currency traders care far more about the amount of dollars central banks sell than the amount they keep.  Presumably those trading US treasuries or agencies have a slightly different point of view.

Looking at the IMF data has another advantage.   I don’t need to make any assumptions to flesh this data out – it comes straight from the mouth (or spreadsheet) of reporting central banks.

The first chart shows the stock of reserves and the dollar share of those reserves on different axis. 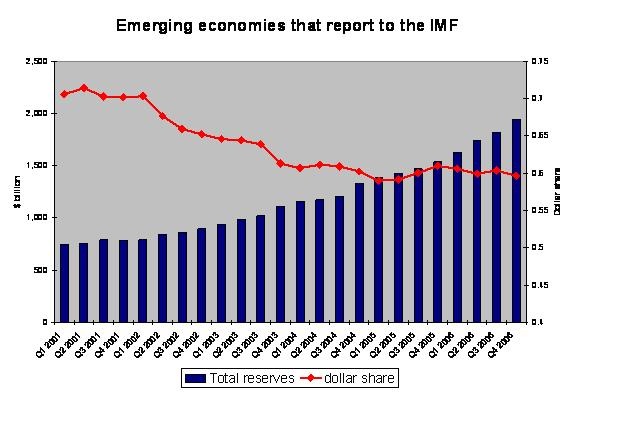 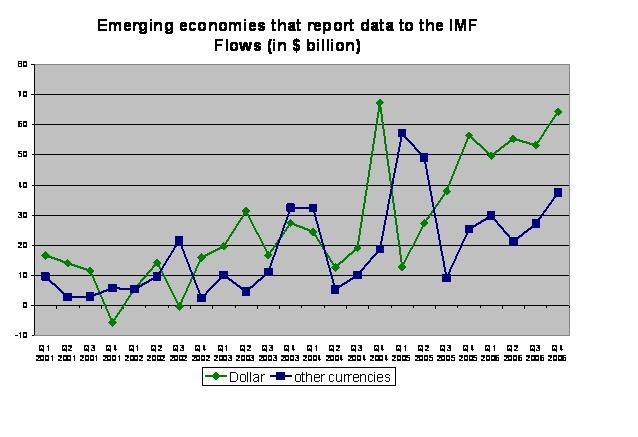 A couple of things jumped out at me.

Second, those emerging economies that report data to the IMF did diversify – in the sense of lowering the dollar share of their reserves – between the end of 2001 and the end of 2003.

If you match the flows data to the chart showing the dollar share, there two quarters of what might be called “active” diversification.  In both q3 2002 and q4 2003, reporting central banks bought a lot of euros and other currencies even as the dollar was falling.

In those quarters central banks added to the pressure on the dollar.

Central banks also engaged in “passive” diversification.   Through the end of 2003, if not a bit later, they allowed the rising dollar value of existing euros and pounds to reduce the dollar’s share their portfolio.

The flows in Q1 2005 perhaps to represent some true diversification – the dollar was reasonably strong that quarter, and, based on the flow data, a lot of emerging economies sold some of the dollars that they had bought in q4 2004 for euros and pounds.  But in q2 2005 the dollar rose sharply in value (the euro fell).  Central banks bought euros when private markets wanted to sell.   Their demand for euros was stabilizing.

Fourth, the salient feature of the past quarter and indeed the past year, at least to me, has been the strength of dollar reserve growth.   Reporting emerging economies added $200b to their dollar reserves – a record for this group.    That kept the dollar’s share of their reserves roughly constant even as the dollar slid against the euro, increasing the dollar value of their existing euro and pound reserves.

Fifth, central banks that report data on the currency composition of their reserves to the IMF also bought over $100b in non-dollar assets.  If one assumes that they generally intervene by buying dollars (for their own currency), that means that they were constantly selling dollars.    But they weren’t actually diversifying.  They consistently kept far more dollars than they sold, maintaining the dollar’s overall share of their total reserves.

Let’s look specifically at the data for q4 2006.   Both dollar and non-dollar reserve growth spiked up in q4 2006.  Emerging economies that report the currency composition of their reserves to the IMF added $64b to their dollar reserves, and $37b to their non-dollar reserves (this data has been adjusted for valuation, it is measure of the “flows”).  The dollar’s share of the reserves of those emerging economies that report to the IMF fell slightly, going from 60.35% at the end of q3 to 59.7%

To me, the most important data point is the $64b in dollar reserve growth from those emerging economies who report data to the IMF.   $64b is the second highest quarterly total for this group of countries, topped only by the $67b in q4 2004.   It was enough to finance roughly a third of the United States current account deficit in q4.

I believe that emerging economies that don’t report added $117b to their reserves -- that total includes SAMA’s reported foreign asset growth and an estimated $15b in Chinese bank swaps in q4 so it is a bit higher than the total in the COFER data.  If one assumes that a fairly large share of that flow – a flow which comes primarily from China and a set of oil exporting economies that manage their economies against the dollar – went into dollar assets, emerging economies potentially financed an exceptionally large share of the US deficit in q4 2006.

The COFER data, though, can also support a “diversification” story.  Non-dollar flows were strong for one thing.   And the dollar reserve growth, while large, wasn’t quite enough to keep the dollar share of these countries’ reserves constant.   If those emerging economies that report data had wanted to maintain a 60.35% dollar portfolio share, they would have needed to have bought added about $79b to their dollar holdings, not $64  -- and correspondingly reduced the non-dollar purchases to around $22b.

However, the dollar share of these countries that report detailed reserve data to the IMF has bounced around a bit.  It was as low as 59% in q1 and q2 2005 – and q4 isn’t that different from q2. I would want to see a bit more of a trend before arguing that a new era of diversification has started.

We can do a bit more with the data as well.

Russia almost certainly reports data on the currency composition of its reserves to the IMF.  It also reported that it added $31b to its foreign exchange reserves on a flow basis in the fourth quarter.    So Russia accounts for a little under a third of the total flows from reporting emerging economies.

Russia clearly diversified its reserves over the course of 2006.   Indeed, Russia has reported that it brought the dollar share of its reserves down to around 50% (49%) by the end of the third quarter.

I cannot yet be sure which of these two things happened.

But there is a puzzle in the data for 2006: Russia’s diversification doesn’t seem to have had much of an impact on the aggregate dollar share of the portfolio of reporting emerging economies.

And we know Russia diversified over the course of 2006.  We actually now know that it more or less had completed the bulk of its diversification by the end of June 2006.   The dollar share of its reserves was around 50% then.    There is no shortage of supporting evidence either -- the large valuation gains Russia reported in q4 2006 are consistent with a low dollar reserve share.  The US data shows a sharp fall in Russia’s holdings of US assets in q1 2006.

Indeed, based on the US data (along with data on the valuation gains on Russia's reserve portfolio reported by the Bank of Russia), it seems unlikely that Russia started diversifying in a big way before the beginning of 2006, and it is pretty clear that it had large completed that diversification by the end of June.   The dollar’s share of reporting emerging markets also slid a bit during this period – but not by as much as one might have expected.   The same is even more true for data for the year.

But let’s assume that the basic scenario is right.   To bring the dollar share of its portfolio down from 70% to 50%, Russia would have added about $25b to its dollar holdings in 2006 and $83b to its non-dollar holdings.      If Russia does report to the IMF – as I think is the case -- other reporting emerging economies necessarily added $197b to their dollar reserves, and only $32b to their non-dollar reserves.

That is kind of stunning.  So stunning that it calls into question my proposed diversification path.   Russia may have had slightly less than 70% of its reserves in dollars at the end of 2005.

But Russia clearly reduced its dollar share over the course of 2006.  Consequently, the fact that the dollar share of those emerging economies that do report to the IMF didn’t fall even as Russia’s dollar share fell implies fairly rapid growth in dollar reserves elsewhere.

I’ll put it another way.  Either I am reading the COFER data wrong or some other emerging economy added an awful lot of dollars to their portfolio in 2006, offsetting Russia’s diversification.

And since we are not getting close to the end of June, I should soon have COFER data for q1 as well.  I can hardly wait (seriously).  The COFER data should tell us a lot about the global flow of funds in the first quarter.

Do foreign holdings of US debt put the US economy at risk?