1/ Always look at the data on short-term flows.   In February, the increase in short-term official holdings accounted for about $20b of the $33b in total recorded official inflows. Total flows were stronger than long-term flows.

2/ If the data on official holdings on Treasuries doesn’t make sense, look at the data from Norway for an explanation.  The activities of Norway’s government pension fund appear in the “official data.”   They seem to trade actively.  In February, they sold $8.2b of long-term Treasuries and added $8.3b to their cash holdings.   They also were big sellers of Treasuries in January ($11.7b).   Sometimes this seems to reflect Norway’s willingness to sell options and the like to get a bit more yield.  Sometimes it seems like the Norwegians are betting on the shape of the Treasury curve.

Right now, though, the Norway’s government fund is probably raising cash to buy more equities.  By increasing their equity portfolio they are effectively diversifying away from the dollar.  The US has a slightly lower share in their equity portfolio than their debt portfolio.  Above all, though, raising the equity share increases Asia's weight in their portfolio (largely at expense of Europe).  Selling high?  Front-running the People's Investment Company?

3/  The TIC data usually provides very little useful information about what the other oil exporting economies are doing.  The Asian oil exporters bought $1.2b of long-term debt and equity while reducing their short-term claims by $5.1b in February.   Does that mean anything?   Probably not.  There hasn’t been a good correlation between the Gulf’s rising assets and the TIC inflows for a long-time.    Russia increased its short-term holdings by $3.5b in February, after cutting its short-term holdings by $5.3b in January.   That is probably just noise.   We already know that Russia has diversified away from the dollar, and increasingly seems to be sifting from short-term to longer-term Agencies.  But Russia’s purchases of longer-term Agencies don’t seem to consistently show up in the TIC long-term data (January is something of an exception). I think Russia buys in London rather than in New York.

Some of that reserve growth likely came from shuffling pre-existing Chinese foreign assets between the state banks and the central bank.   Stephen Green of Standard Chartered writes the "explosive increase [in Fx reserves] is likely explained by funds that has already entered China moving around, rather than new hot money inflows."  Basically, some of China's hidden reserves stopped hiding (see Richard McGregor of the FT for more).  But I would still guess China bought more than $17b.

5/ Sometimes the TIC data really does tell you something.   Brazil increased its dollar holdings by $9.1b in February (mostly long-term Treasuries).  Its reserves went up nearly as much.   India’s reserves also increased by about $10b in February, but its recorded US holdings only increased by around $4b (mostly short-term stuff).   Brazil has a large share of its reserves in dollars; India doesn’t.    For the little it is worth, Korea has been significant net seller of US assets in both January and February – its $3.9 in Treasury sales in February were not offset by its $0.6b in corporate bond purchases, and its short-term holdings actually went down.   The Bank of Korea (BoK) is now on my “diversification” watch.

6/ Don’t trust the TIC’s breakdown between private and official inflows.

Because of China – and to a lesser extent the oil exporters – there is now a large gap between the official inflows implied by the survey and the official inflows recorded in the TIC data.   The gap in the latest survey was around $120b over the course of a year, or $10b a month.  Stronger reserve growth suggests that the size of the gap has, if anything, increased.   Look at the following chart. 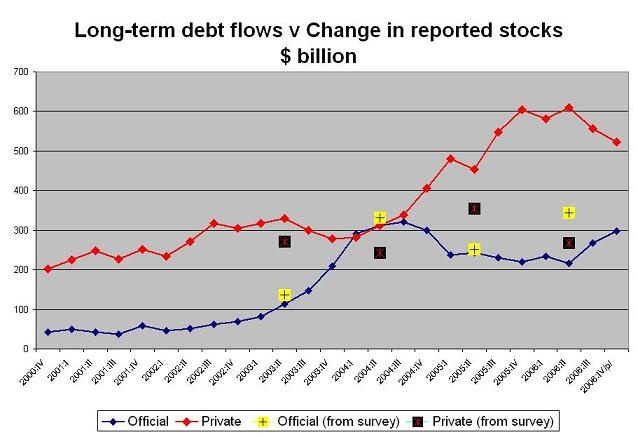 Judging from the most recent surveyt, the TIC data massively under-counted official purchases between end-June 2005 and end-June 2006 – and even more massively over-counted private purchases.

The fact that the historical data on official purchases matches up pretty well until mid 2004 likely reflects revisions to the data – the BEA (I think) adjusts the flow data to reflect the stock data over time.   The US TIC data does a far better job counting official Japanese purchases than Chinese or oil purchases.   Japan doesn’t make as much use of Hong Kong, or London …

But I don’t quite understand the enormous gap between the recorded private inflows and the change in private holdings reported in the survey.     The fall in implied private purchases was much larger than the rise in official purchases.   Talk about a black hole!

There is another indication that the TIC data -- especially the recent TIC data -- understates official flows.  The recent TIC data hasn't matched up well with the increase in the Fed’s custodial holdings.   The TIC data shows a $13.1b increase in official holdings of long and short-term securities in January and a $14.5b increase in February (this is the sum of lines 9, 25 and 28 on the TIC release; this total is smaller than line 32 because doesn’t include central bank deposits in the US banking system). The custodial data shows an increase of $38.1b in January and $43.2b in February.

Many analysts have noted that Agency purchases fell off in February -- at least judging from the TIC data.   The custodial data tells a somewhat different story though.   Central banks' custodial holdings of agencies increased by $16b.

The Federal Reserve has prepared a nice overview of the TIC and survey data that explains how the increase in custodial holdings can exceed the official inflows reported in the TIC data:  a foreign central bank can buy a US treasury (or agency) in London, and then ship the security over to the New York Fed for safekeeping.   The purchase – in London – would never register in the TIC data.

Incidentally, the Federal Reserve’s guide to the data suggests that actual official holdings are likely larger than reported in the survey – which is, at the end of the day, a survey of the foreign holdings of US custodians.   Lots of foreign custodians end up assigning US securities bought for their clients in say London to a US custodian, so the survey picks up some things the TIC data doesn’t pick up.   But it doesn’t pick up everything.   I suspect that this is particularly true for the Middle East.

And after reading the Fed’s description, I am fairly confident that official funds farmed out to private managers would be recorded as “private” in the survey data.

Unimpressive (the results of the IMF&#8217;s experiment with multilateral consultation)