I get a feeling that the July trade data is the last hurrah -- or close to it -- of the "decoupled, weak US dollar, high oil prices and strong US exports" world. The reason for the large upward blip in the July trade deficit is simple: both oil import volumes and the oil price rose. The average price of imported oil topped $125 for the first time. And in July, net petroleum import volumes (using real petroleum trade balance as a proxy, it is in exhibit 11) were down "only" 2.1%. Net import volume was down 14.8% in June. Basically, July looks to be payback for June. Nor the year, net petroleum import volumes are down 9.1%. The petroleum deficit increased by $6b in July alone.

Everything else was more or less as expected -- exports continue to be strong and real non-petroleum goods imports continue to be weak (with price rises pushing the nominal total up). The "real" non-petroleum deficit is improving. The overall deficit isn’t. Calculated Risk’s graph tells the story clearly. The goods and services deficit this year through July is up a little compared to last year ($420b v $416b) -- but it is up far less than the overall petrol deficit. The petrol deficit for the first seven months was $90b larger than the deficit in the first seven months of last year. And the July petrol deficit was $43.4b -- by far the largest component of the overall deficit.

But help (lower oil prices) is one the way; the q4 goods and services trade deficit should fall significantly. Yet if the bad news on petrol looks to be (mostly) over, so too might be the goods news on exports. After all, the same forces that pushed up oil (a strong global economy and a weak dollar) also pushed up US exports. There isn’t much sign of such a slowdown in the July data though; the slowdown in real export growth that worried me earlier this year is past. Real exports are rising fast, while real imports continue to stagnate. Look at the following graph, prepared with help from the CFR’s Arpana Pandey: 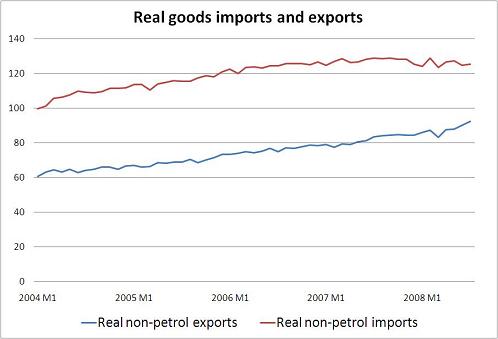 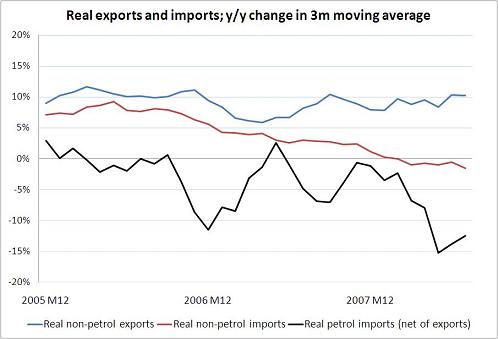 The recent improvement in the real non-petroleum goods balance actually stems far more from a slowdown in real non-petroleum imports than from an increased pace of growth in real exports. Real export growth actually picked up back when the dollar first started to slide. An improvement in the overall deficit though required a slowdown in import growth. And it is clear that the slump in net petrol imports is a direct result of higher oil prices.

The risk, of course, is that the slowing global economy will bring the pace of real export growth down. Real export volumes could really stall, not just provide a head fake like in the spring.

Now on to China, which posted a large trade surplus in August. It really shouldn’t be a surprise that Chinese real export growth is roughly the same as US real export growth (around 10% y/y). Like the US, China has been benefited from strong growth in Europe, and strong demand growth elsewhere in the emerging world. And since it still basically follows the dollar, it also has benefited from a weak currency, notwithstanding the protests of China’s exporters.

The combination of lower oil prices and perhaps faltering demand for other imports as China’s own construction sector slows should combine to at a minimum keep China’s surplus up -- and perhaps to push it even higher. Remember, China’s surplus didn’t fall by much when oil was at its peak, which suggests it could rise significantly if oil prices fall.

FRBNY custodial holdings of Agencies still falling, but at a slower pace