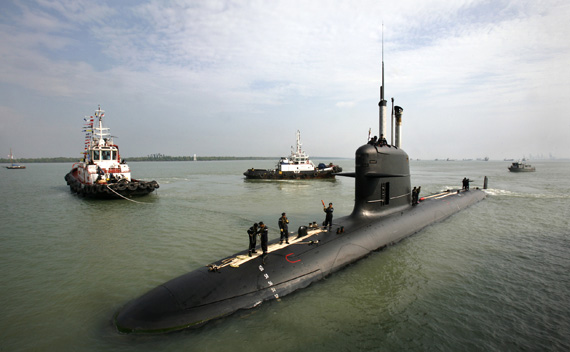 As I will explain in an upcoming Newsweek piece (I will post once it’s out), over the past five years Southeast Asia has been the center of an intense arms race, which has largely gone under the radar of most outside policy-makers. According to the Stockholm International Peace Research Institute (SIPRI), the amount spent on weapons purchases in Southeast Asia nearly doubled between 2005 and 2009 alone, with Vietnam recently paying $2.4 billion for Russian submarines and jetfighters designed for attacking ships. Other recent buyers have included Malaysia, which recently spent nearly $1 billion on new submarines of its own, and Thailand, which has drawn up its own shopping list of submarines and more advanced jet fighters, while Indonesia and Singapore also have announced recent sizable arms purchases.

This arms race has proceeded despite the fact that most Southeast Asian nations have no obvious near enemies and, if they are involved in conflicts, they tend to be local insurgencies like the conflict in Papua, the southern Philippines, or southern Thailand – hardly battles that require the kind of sophisticated air, sea and missile weaponry that states are buying up. To be sure, there are lingering historical tensions between countries like Thailand and Cambodia or Thailand and Burma, which itself has bought a sizable amount of Chinese and Russian weaponry, but these are unlikely to explode into hot war. The real answer, then, is that countries like Vietnam and Malaysia are arming up to send a signal to a rising China that they will continue to protect their strategic interests and their claims to energy resources in areas like the South China Sea, the Mekong basin, and other regions. And though China has not deviated from its increasingly aggressive approach to Southeast Asia, these arms figures should give it pause.

U.S.-China Trade Conflict is Here to Stay. But …