A line in the FT’s recent leader on sovereign wealth funds jumped out at me. The rise of sovereign funds, the FT opined, was an irony in a era of market-led globalization.

The irony, then, is that an era of market-led globalisation is making government-controlled funds more important than ever before.

That argument didn’t ring quite true to me.

The part about the rising importance of government-controlled funds is hard to dispute, especially given their role in the recapitalization of the US financial system. But I would argue that the rise of sovereign wealth funds -- and more generally, the rise of what Martin Wolf called "state capitalism" -- is the almost inevitable result of the state’s leading role in the current process of globalization, not a irony in a market-led era.

That isn’t the conventional wisdom, I know. But I have a hard time reconciling the enormous role governments now play in the global flow of capital with the idea that the current era is marked by "market" as opposed to "state" led financial globalization. Consider the following graph*, which tries to show the annual increase is government’s cross-border assets. Total government asset growth is now nearly two times the size of the US external deficit. 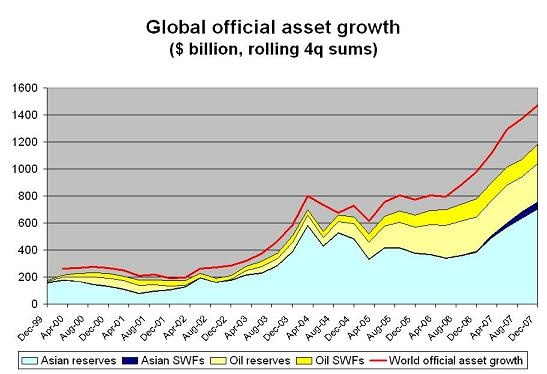 A set of developments (the rise of China, higher energy prices) and policies (exchange rate management in Asia, fiscal surpluses in the commodity exporters) has concentrated the world’s financial firepower in the hands of states in emerging economies.

State flows, after all, now dominate global capital flows.The IMF’s data makes this crystal clear. The IMF’s WEO data tables suggest that $500b in (net) private capital inflows to the emerging and developing world won’t fund a current account deficit, but rather will combine with a a roughly $700b current account surplus to finance $1200b in official capital outflows. My own work suggests the IMF underestimated official outflows by about $200b.

That doesn’t strike me as "market-led" globalization. It strikes me as a world where government intervention thwarts market outcomes.

Other examples of the growing role of government in the economy abound:

State banks are now among the world’s largest banks, and rather than shrinking in their home markets, they are expanding globally. China’s state banks are best example: they are expanding abroad even though their home market is tightly regulated (deposit rates are capped, and there is a floor on lending rates) and they are often subject at times severe administrative guidance. The state gives (the juicy interest rate margin) and takes (high reserve requirements, a portion of which have to be met in dollars, lending controls) but it is always present.

Global oil production is increasingly dominated by the national oil companies of the oil-exporting states. They sometime compete with and sometimes cooperate with the state-oil companies of emerging market economies - notably China and India. The privately-owned international oil companies (to be fair, some of which are often viewed outside the US and Europe as proxies for their home countries) are investing enough to sustain their current share of global oil production.

China is now embracing a wave of import-substitution - for chemicals, steel, autos, even aircraft -- behind the protective wall created by China’s undervalued exchange rate. Many of the leading players in this process are owned by various parts of China’s state. What might be termed exchange rate protectionism is increasingly shaping the location the "market" chooses for global production.

China’s exchange rate regime has effectively given China’s government a monopoly on outward capital outflows from China. Saudi Aramco’s monopoly on Saudi oil production effectively provides Saudi Arabia’s government the same kind of monopoly, even if some of the outflow comes from "private’ accounts. The same logic applies to a host of other oil-exporting economies.

The enduring legacy of the Asian financial crisis - and the collapse of oil prices that followed, pushing countries like Russia into default - has been the reassertion of the power of the emerging market state.

Those states though like to be market successes. Their presence in global markets has exploded.

And - as Stephen King of HSBC argues - the increasing financial power of emerging market states is likely to trigger a reassertion of the state in advanced economies.

*I fleshed out the IMF’s data on reserves (the COFER data) with an estimate for q4 and an estimate for the funds transfered to sovereign wealth funds. My numbers are are all adjusted for valuation gains and thus should only be compared with IMF numbers that are also adjusted for valuation. My data for emerging Asia and the oil exporters relies comes from the data individual countries release supplemented by IMF data. For sovereign funds in particular I have to make big guesses. My data for oil asset growth is almost certainly an underestimation, largely because I have only focused on the largest oil exporters. Some smaller oil exporters fall into the "other" category. Yet for all its limitations, I will happily stack my data up against anyone else’s data. It reflects the cumulative results of three years of sweat equity -- including a fair amount of sweat equity from Dr. Menegatti of RGE - and has been rigorously tested for consistency.

The myth that China&#8217;s reliance on exports for growth is a myth