The pace of RMB appreciation against the dollar has picked up recently.

China presumably didn’t let its currency rise just because its trade surplus --which rose from $177.5b in 2006 to $262.2b in 2007, a rise that should push the current account surplus up toward $350b even in the face of a big commodity shock -- is now quite large by any measure. China’s surplus has been growing for some time now without prompting a significantly faster pace of appreciation.

But RMB weakness is now contributing to domestic inflation. The recent rise in inflation certainly has caught the attention of China’s policy makers.

It presumably isn’t an accident that nearly all booming emerging economies that have linked their currencies to the slumping dollar have seen a surge in inflation this year. The Saudi Arabia, other Gulf economies, Russia (which targets a euro/ dollar basket) and Argentina are in the same boat. And China also isn’t alone in making increasing use of price controls to try to reign in inflation. It is a rather common policy response from countries who have hamstrung domestic monetary policy by targeting the exchange rate. 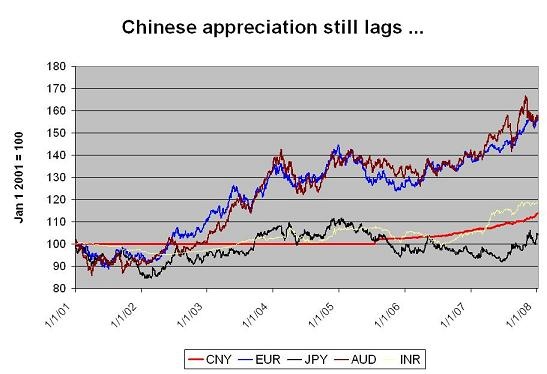 I don’t think it is an accident that the US trade and current account deficit is heading down Canada and Europe, but still rising with China and to a lesser extent Japan. I’ll present the supporting data in a forthcoming post.

And how is China’s currency doing relative to the leading currency of its largest trading partner? 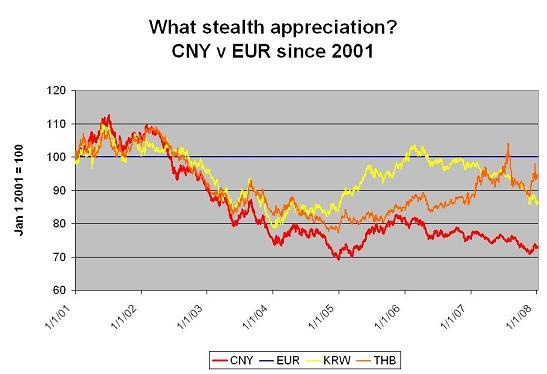 The RMB doesn’t just need to rise against the dollar. It also needs to rise faster than other currencies.

The RMB cumulative fall against the euro over the past several years is far larger than the cumulative fall in the currencies of other, less dynamic emerging Asian economies (Korea and Thailand are the other two countries in the graph.

I don’t think it is an accident that the RMB’s depreciation against the euro has led to a huge increase in China’s trade surplus with Europe (see p. 7 of Li Cui and Murtaza Syed for data through 2006; the 2007 will paint a more dramatic picture).  Richard McGregor reports that Chinese exports to Europe were up 29% y/y in 2007, while Chinese exports to the US were up only 14% (using the Chinese data, which tends to understate total exports to both the US and Europe because of shipments through Hong Kong, but provides useful information on the pace of growth).

The surge in Chinese exports to Europe following the RMB’s depreciation against the euro along with the pattern of adjustment in the US trade balance seems like prima facia evidence that exchange rates actually do have an impact on trade, not withstanding the conference board’s study (which, alas, seems to be behind a firewall).

The Economist clearly doesn’t like the threat of Congressional legislation targeting China’s currency.

But that doesn’t mean that the American -- and increasingly European - arguments that China’s continued resistance to allowing its exchange rate to appreciate by more against the dollar (or to appreciate at all against the euro) lacks merit.

I will be very interested to see how much China had to intervene in the market in the fourth quarter to keep the RMB from rising by more. Actually, what I am really interested in is how effectively China managed to hide its intervention, whether by shifting funds to the China investment corporation or by forcing the banks to hold more dollars.

UPDATE: China’s reserves data is now out. Reserves rose $94.6b in q4 (less on a flow basis, as there were substantial valuation gains) to reach $1,528b at the end of December. Trade surplus, interest income on China’s existing reserves and FDI inflows would imply a $115b increase (according to AFX news’ well done story). Consequently reserve growth is a bit low -- likely because of the various measures China has used to force the banks to increase their holdings. It also seems likely that the last, large Ministry of Finance bond to fund the CIC wasn’t converted into RMB in q4.

Shanghai, Mumbai, Dubai or goodbye. The year of reverse bailouts