The basic constellation in the post-BoJ QQE, post-ECB QE world marked by large surpluses in Asia and Europe but not the oil-exporters has continued.

Inflows from abroad have come into the U.S. corporate debt market—and foreigners have fallen back in love with U.S. Agencies. Bigly. Foreign purchases of Agencies are back at their 05-06 levels in dollar terms (as a share of GDP, they are a bit lower).

And Americans are selling foreign bonds and bringing the proceeds home. The TIC data doesn't tell us what happens once the funds are repatriated. 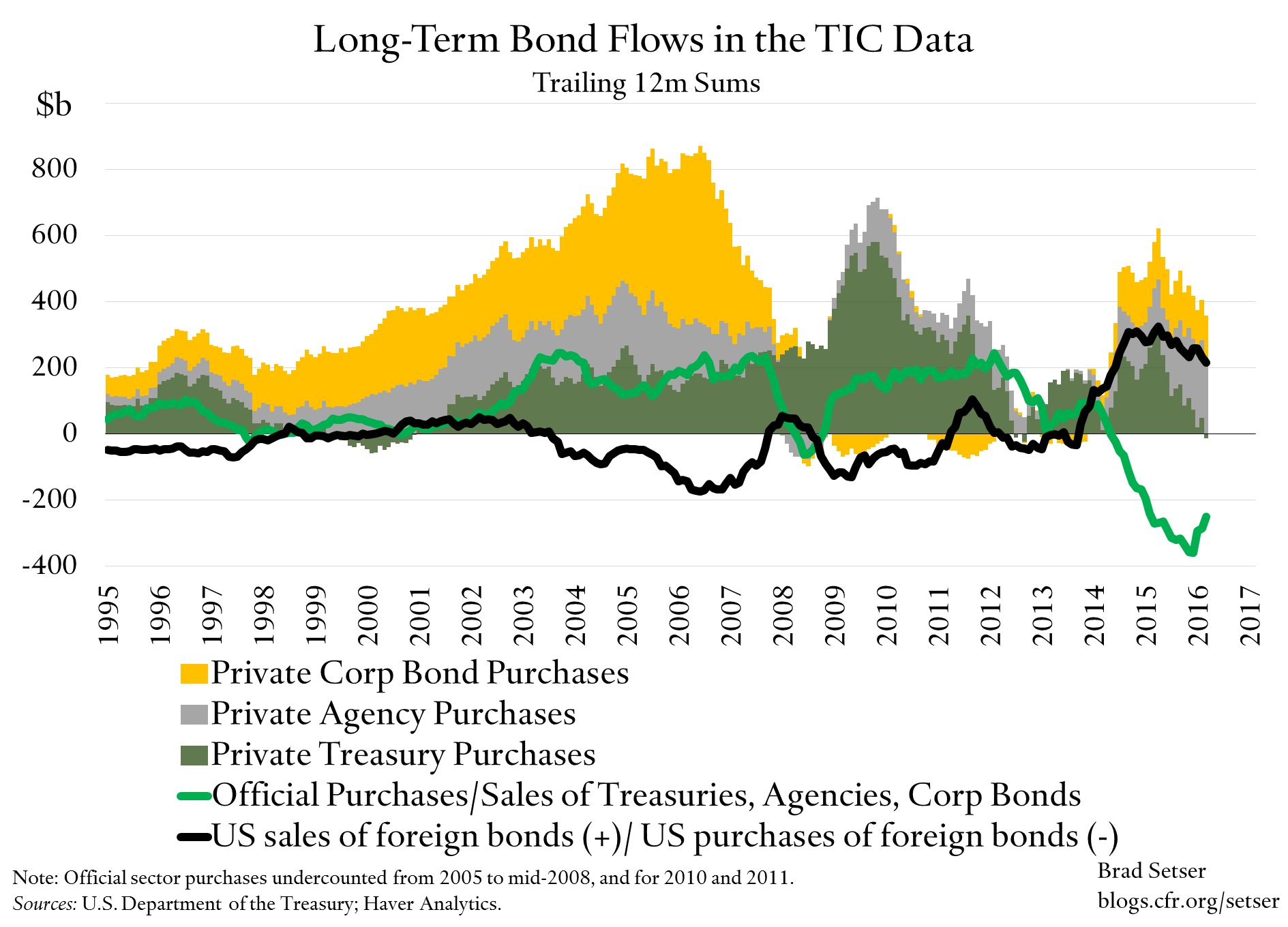 Foreign official accounts (cough, China and Saudi Arabia, judging from the size of the fall in their reserves) have been big sellers of Treasuries over the last two years. As one would expect in a world where emerging market reserves are falling (the IMF alas has stopped breaking out emerging market and advanced economy reserves in the COFER data, but believe me! China's reserves are down a trillion, Saudi reserves are down $200 billion, that drives the overall numbers). But the scale of their selling seems to be slowing. As one would expect given the stabilization of China's currency, and the fall off in the pace of China's reserve sales.

The first is the period marked by large inflows into Treasuries, Agencies, and U.S. corporate bonds: broadly from 2002 to 2007. It turns out—and you need to use the annual surveys to confirm this—that all the inflows into Treasuries and Agencies were from foreign central banks. The inflow into U.S. corporate bonds then was not. It was coming from European banks and the offshore special investment vehicles of U.S. banks. And it was mostly going into asset backed securities.

This is the "round-tripping" story that Hyun Song Shin like to emphasize (Patrick McGuire and Robert McCauley have also done a ton of work on the topic). It is clearly part of the story. But it also isn't the entire story: foreign central bank demand for Agencies and Treasuries was equally important and equally real. The funding of the U.S. current account deficit then took a chain of risk intermediation to keep the U.S. household sector spending beyond its means: broadly speaking, foreign central banks took most of the currency risk, and private financial intermediaries in the U.S. and Europe took most of the credit risk. Sustaining the imbalances of the time took both; and the private sector leg broke down before the official sector leg.*

The second phase was essentially marked by foreign demand for U.S. Treasuries only. That phase lasted from 2008 to roughly 2012 or 2013. A large part of that demand—the bulk of it in fact—came from foreign central banks. Reserve accumulation remained high until 2013. But the private flows—the ones that in the past had gone into the U.S. corporate debt market—went away. And the U.S. needed less financing, as its post-crisis current account deficit stayed around 3 percent of GDP. 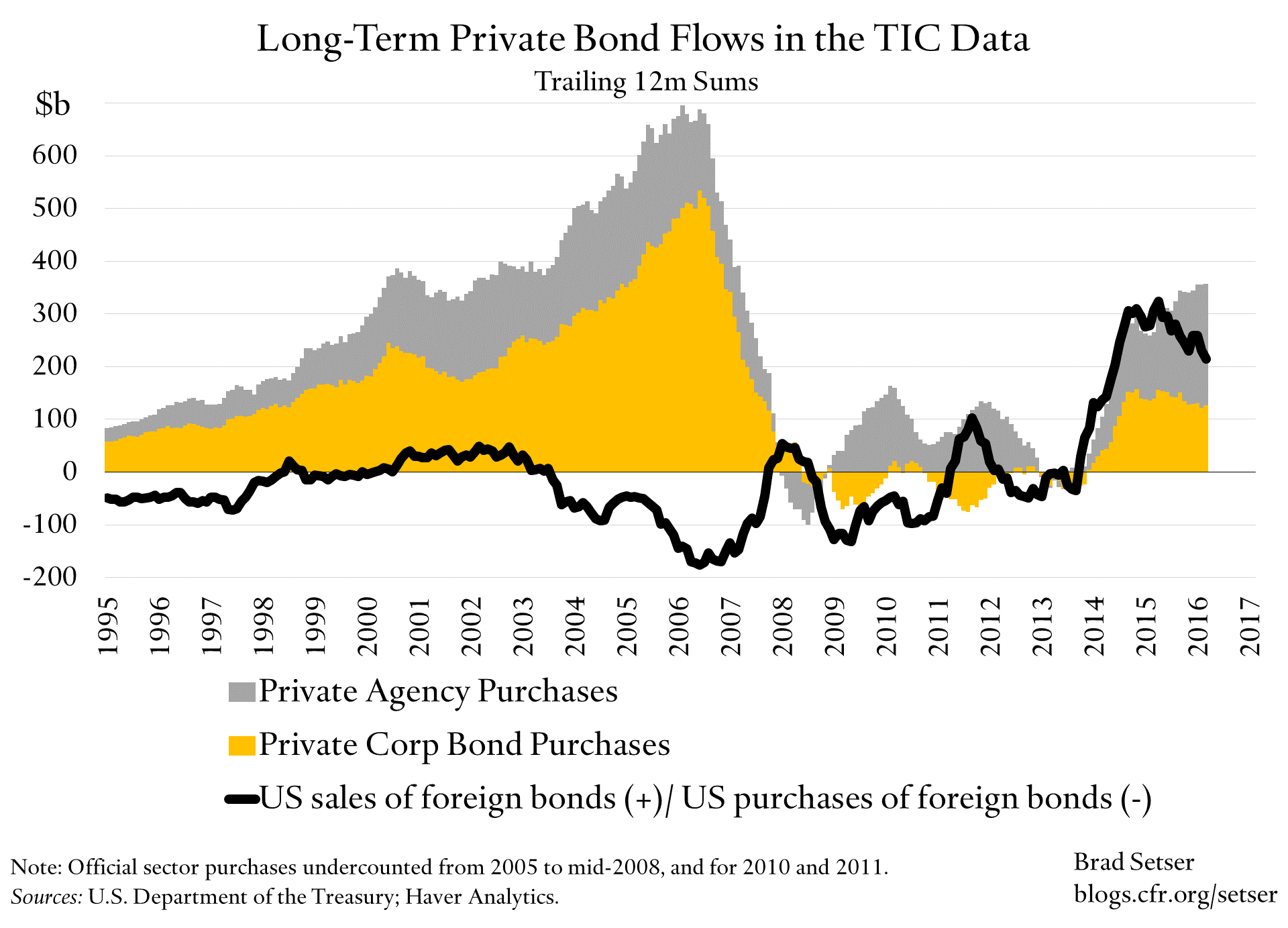 The most recent phase started in 2014. It really seems to coincide with the start of ECB QE. But broadly speaking it reflects the combined impact of ECB QE, Japanese QQE, and Fed normalization. This led to big shift in the currency composition of official bond purchases, as I've previously discussed; central banks basically stopped buying dollar bonds and started buying euro bonds.

And the same forces that led the dollar to appreciate in late 2014 also led to a marked shift in the composition of inflows into the United States.

Global reserve accumulation stalled, and then reversed—leading to Treasury sales. The inflows needed to finance ongoing deficits came from Americans selling their low-yielding (and depreciating) foreign bonds, and private and quasi-sovereign investors (Taiwanese and German life insurers, Japan's government pension fund, the Dutch public pension fund, etc.) looking for a bit of yield. This subset of investors was clearly willing to buy U.S. corporate bonds, and take on a bit of credit risk to get a bit more yield.

The correlation between the rise in foreign demand for U.S. corporate bonds and the surge in U.S. sales of foreign bonds is striking, at least to me.

And recently someone (Japanese banks? China's reserve managers? others?) has really taken a liking to the small yield pickup offered by Agency mortgage-backed securities.

The implication of all this of course is that the U.S. external deficit is being financed in the first instance by inflows into the corporate and agency markets, not by direct foreign purchases of Treasuries. In fact the net issuance of Treasuries required to finance ongoing fiscal deficit is now all being taken up by U.S. investors.

But there are two reasons why that could change: (a) the ECB could stop buying euro area bonds, reducing euro area investors need to look for yield in the U.S. (ECB purchases currently exceed net issuance of euro area bonds, forcing investors to reallocate their money elsewhere) and (b) the U.S. Republicans could unite around a big tax cut that raises the U.S. fiscal deficit. In that context there may be a fourth big shift—one that sees renewed foreign buying of "safe" Treasuries on a large scale, with foreign demand for U.S. government bonds (again) providing the inflow from abroad that sustains ongoing external deficits.

The key question, though, in such a world, is what kind of interest rate would the U.S. need to pays on its Treasury bonds. Would the forces that have kept yields low (the global savings glut, including a glut in corporate savings) win out? Or would U.S. rates need to rise to pull in foreign funds, especially if ECB purchases aren't depressing yields and effectively pushing funds out of the euro area ....

(P.S. bond market and flow geeks should read the recent work from Goldman Sachs' rate team on the global impact of ECB QE.)

* Nouriel Roubini and I got this wrong back in 2004 and 2005, though I think we got the basic notion that 5-6 percent of GDP current account deficits were not sustainable right. And I also think the U.S. did experience a bit of a sudden stop in private inflows in 2007: it was just offset by a surge in official asset accumulation—so it didn't result in a Wile E. Coyote moment. What we clearly got wrong was U.S. rate dynamics in a crisis. I still kick myself on that one. And have tried to work the thinking of Paul Krugman and Paul de Grauwe into my balance of payments centric world view.

The Combined Surplus of Asia and Europe Stayed Big in 2016